Survey will run until August 11. Results will be presented at ElixirConf 2020. After all results and raw data will be made public.

Will you also publish results here?
(I’m not on twitter and friends)

Sure, but not until September time(ish)

whew …that was hot. Done.

Done, but there’s no way to state your at student and/or unemployed on the survey. I personally know of a few students (including me) who use Elixir regularly

I’ll make note of this for next year’s survey. I should have captured that but it slipped my mind.

About question 30: “How do you debug?” should really have :observer.start answer as well.

It’s not technically debugging but helps clarify mistakes in the OTP app’s structure or logic and has helped me several times in the past.

I would also add Rubber Duck and the more extreme Her Majesty debugging techniques, to be fair. 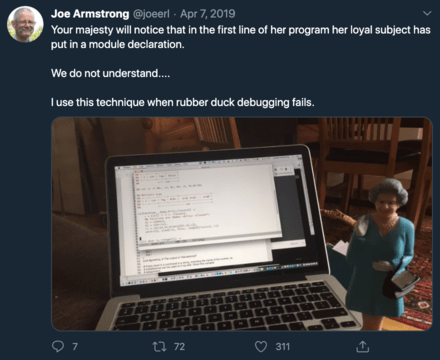 I feel China’s falling behind a lot, both in technology and in English

I have completed the survey, but for me, this survey is missing an important question.
Some people think that once you pick elixir in your company or personally, you’ll stick with it.

Unfortunately, this is not always the case. For example, I am in a company that is leaving Elixir behind after years of using it and is replacing it with another technology.

Now while I understand that the people currently using Elixir are the ones most likely to be interested in the community and in the survey, I also feel like there should be at least 1 question in the survey asking people why their companies ditched Elixir in favour of another alternative or what are the major blockers for adoption in companies.

It is my personal believe that an answer regarding this area could be used to make the community stronger where it is weaker and thus gain more visibility company wise.

Other than that, great survey and I hope everyone completes it!