In a function I would like to execute some elixircode that resides in json. How can I do that?
The from the map extracted string with elixircode is f.e.:

I believe you just need Code.eval_string(str, [body: body]). Do note that evaluating code from some external source is almost always a bad idea (it is very insecure to execute arbitrary code like this).

Note that the snippet of code you have also generates some warnings. Storing code inside e.g. a database also makes it impossible to refactor it later, so I would strongly advise against it.

Great, thanks. I missed the second input parameter in my own tests. The code that is evaluated is edited in a formbuilder. For single field validations I’m using javascript for the more complex validations. These are executed on the client, after submit they are executed on the server via https://github.com/devinus/execjs also. F.e. (visible URL not reachable via internet btw): 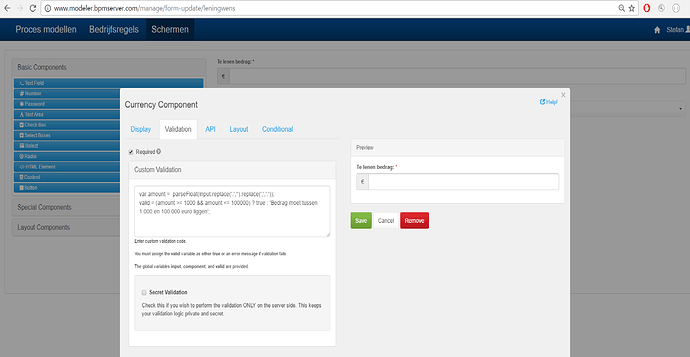 For validations of combinations of fields I’m using a textfield component (should become a special component later) wherein you can edit elixircode:

combinaties_validatie.png3116×1424 199 KB
These are executed on the server only of course, after submit of the form.
Would you advise against the practise after this explanation?
1 Like
Model data validation/sanitization
OvermindDL1 March 23, 2017, 4:11pm #4

I would still advise against it… Any form of running externally submitted code ‘in’ the server itself (and not in a sandbox like LUA) will be a security issue at some point in my experience. Either make a DSEL (as I’ve done) or use erlua or something, but I would never ever recommend executing external code directly on the BEAM…

When you give users too much freedom in the language they can use on the front-end, you will end up with snippets of code that are tightly coupled with the old version of your application, making it very hard to update it without breaking existing code. Especially if you plan on distributing your application to companies, where each company might have their own validation snippets. You’ll have created a situation that is impossible to test.

In this case, it seems like the code that users should be able to write should be restricted to validation logic. So indeed, it seems to me, just like @OvermindDL1 suggested, that you want to work with a small domain-specific language that is explicitly not Turing complete (See Surprisingly Turing Complete why this poses a problem).

As for a practical solution to your problem:

Thanks, also overmind. I will take a further look at your suggestions and links. Of course not every developer should be able to edit these js / elixir validations, authorization could help also.

Thanks, also overmind. I will take a further look at your suggestions and links. Of course not every developer should be able to edit these js / elixir validations, authorization could help also.

A nice thing about a DSEL is that you could generate validations both server-side and client-side from them, safely.

Any good reads about these Domain-Specific Embedded Languages (never heard of them)? I could also just use js for all validation logic, but that would make f.e. db lookups at least a complicated thing to think about.
Any problem with executing js validations on the server btw? I don’t have a webdev background, sorry.

Heh, it is basically where you make up your own language to do something for a specific tasks. Like for doing validations I’d probably just make it json so easy to parse on both client and server, purely data declarative, so maybe something like this from your first post:

Or something like that. This example is verbose because it is JSON, but you do not need to build a parser, instead you just pass it around a few calls along with the data to work over and do the comparisons, almost stupid-easy to write in Elixir and Javascript both.

Any problem with executing js validations on the server btw? I don’t have a webdev background, sorry.

Many, anything turing complete can do nasty things, even if it is not able to access other things.

I find the idea of using a DSL for validations very attractive. I will put it on my todo list. JSON is probably not the best fit: “while some frameworks provide an XML or JSON [3] syntax for defining the validation rules, because of the limitations in semantics of these languages, they can be used only for simple cases” (https://www.cas.mcmaster.ca/~carette/publications/FedorenkoThesis.pdf , title of the thesis is “VALIDATION DSL FOR CLIENT-SERVER APPLICATIONS”. I’ll create a separate thread for this one as the thesis contains interesting ideas).

Many, anything turing complete can do nasty things, even if it is not able to access other things.

To expand a little on this, by the way, since it was not immediately evident to me when I first heard about it:

When a language is Turing Complete, it can compute anything that can be computed by any other programming language (or other computer system). This means that:

I think a DSL in my case would be ideal. The form builder is part of my BPMS, workflows, business rules and forms should be maintainable by “citizen developers” mostly. Javascript and for sure elixir validations do not fit in this ideal. But it would cost me some time to find (no f.e. OMG standard for that exists I think) / develop a dsl and a translator to js / elixir. For the time being I keep the js/elixir validations, it’s a learning project for me. Maybe authorization (elixir devs only that can screw the application anyway) on the custom validation fields where you can edit js/elixir could provide a temporary solution. Of course authorization on the modeler as a whole is needed, but it could be more fine-grained. For simple validations like required, min/max values/lengths, regex expressions etc. on single fields the dsl is not needed.
There is a lot to say about validations, see the thesis I sent https://www.cas.mcmaster.ca/~carette/publications/FedorenkoThesis.pdf , in lots of applications validations seem to be poorly implemented.

For note, I only suggested JSON for storing validations in a format for both Elixir and the front-end to use, to actually define a set of validators I’d make a better looking front-end for it, like I did with my permissions system (which also stores via JSON but can do very complex validations like you are wanting your validators to do ^.^).