I’m wondering if we should reconsider the value of the Github IRC integration. While IRC’s popularity has waned a bit, it’s still been the location of some really excellent discussion, and still is populated by folks who have a lot to offer but aren’t inclined to join slack.

My concern is that the noise level introduced by the Github integration stifles conversation. It’s easier for questions to disappear into the backlog, pushed back by commits, and it’s obnoxious to have a burst of them show up mid conversation. Conversations that happen a bit earlier in the day, instead of serving as a spark for follow on by others later in the day, just get buried.

More problematically though I think that when you show up to a channel and it just looks like this: 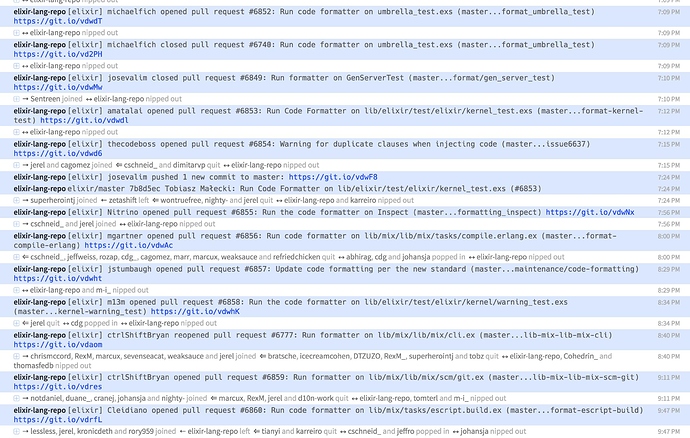 it fails to communicate a sense of conversation or friendliness, it’s just automated noise.

It isn’t like there’s a shortage of ways to be kept up to date on the activities of a Github Repo.

Typically the integration isn’t so inundating, but it doesn’t add much to the IRC experience either. I wouldn’t be sorry to see it go.

For WeeChat users, these filters may help:

I would not care if it is removed, as I have filtered it already, as you can see.