Is Introducing Elixir: Getting Started in Functional Programming still good?

On the official website for Learn Functional Programming with Elixir, it says:

You’ll need a computer and Elixir 1.4 or newer version installed. No previous functional programming or Elixir experience is required. Some experience with any programming language is recommended.

Did any drastic changes happen between 1.4 to 1.8 that makes the books out of date?

Welcome,
Yes, Elixir and Phoenix have been moving fast these last couple of years. You cannot go wrong by taking Dave’s programming course: https://codestool.coding-gnome.com/courses/elixir-for-programmers.
The online documentation is the most up to date reference: https://elixir-lang.org/getting-started/introduction.html
And Dave’s book on programming Elixir is quite good. https://pragprog.com/book/elixir16/programming-elixir-1-6

And Dave’s book on programming Elixir is quite good. https://pragprog.com/book/elixir16/programming-elixir-1-6

It would seem that my book store doesn’t have that one. Are the changes from 1.4 to 1.8 that bad?

Introducing Elixir would likely be redundant if you have already acquired Elixir in Action 2e.

I that one is giving you trouble I’ll stick to my recommendation of Learn Functional Programming with Elixir.

I don’t have that book because it isn’t a beginner level book.

Are the changes between versions that bad that Introducing Elixir: Getting Started In Functional Programming would be out of date?

Is there much of a difference between 1.4 and 1.8 that the book is out of date?

FWIW, I’d answer the original question: no, there is absolutely no issue to use 1.8 while grokking through the examples given for 1.4 and that would not imply the lack of somewhat essential to learn as a beginner.

The books suggested above are still better IMHO.

The books suggested above are still better IMHO.

Is Introducing Elixir: Getting Started In Functional Programming in you opinion a better book?

Are the changes between versions that bad that the book would be out of date?

I has nothing to do with the changes. For the price Introducing Elixir is OK. But in terms of a learning path that effectively demonstrates what Elixir is capable of:

are a better investment of both your time and money.

It would seem that my book store doesn’t have that one.

Most bookstores will let you order books if you ask.

Those by Dave and Ulisses Almeida are kinda classics.

The one you mention I have never seen before, so it’s hard to judge.

Have you read Introducing Elixir: Getting Started In Functional Programming? At my local book store the price isn’t bad.

EDIT: oops, I meant to reply to the topic in general and not necessarily @peerreynders.

And for what it’s worth from a fellow beginner (experience: ~20 years of Java web, ~6 years flirting with Clojure), I’m halfway through Programming Elixir 1.6 and decided that I wanted to slow down and get more background details.

But in terms of a learning path that effectively demonstrates what Elixir is capable of:

I had a similar list in my head, so thanks for validating. Here’s my plan:

I might inject Programming Ecto before Phoenix, though. I started getting a little confused by the Ecto chapter in the Phoenix book; mainly a vague sense of lack of context.

If I wanted to stick with Introducing Elixir (O'Reilly), are the changes from 1.4 to 1.8 that bad?

Does it have to be a paper book? Why not an ebook? You can get 35% off most of them with your forum discount and not only will they be more up to date, but if in beta you’ll get updates as the book is written

With regards to Introducing Elixir, it is written by someone who wrote a similar book for Erlang, so might be a nice book for those coming from Erlang. I have the book, but haven’t actually read it yet so unfortunately can’t offer a review.

Check out our #learning-resources:books section, many of the books have been reviewed

Have you read Introducing Elixir

Scanned through it after I purchased the ebook in Oct 2016 for US$11 during an O’Reilly sale (more recently it was also part of a Humble Bundle).

At that point I already read most of or finished:

So given that background I concluded that I likely had already covered everything already. And I was also left with the impression that the previous books covered the material more effectively for me as a reader.

Given your declared background (Python, Powershell, C#, Java) you face the following hurdles:

Learn Functional Programming with Elixir should address the first two, while Elixir in Action 2e expands on that to tackle the third - more effectively than Introducing Elixir can. 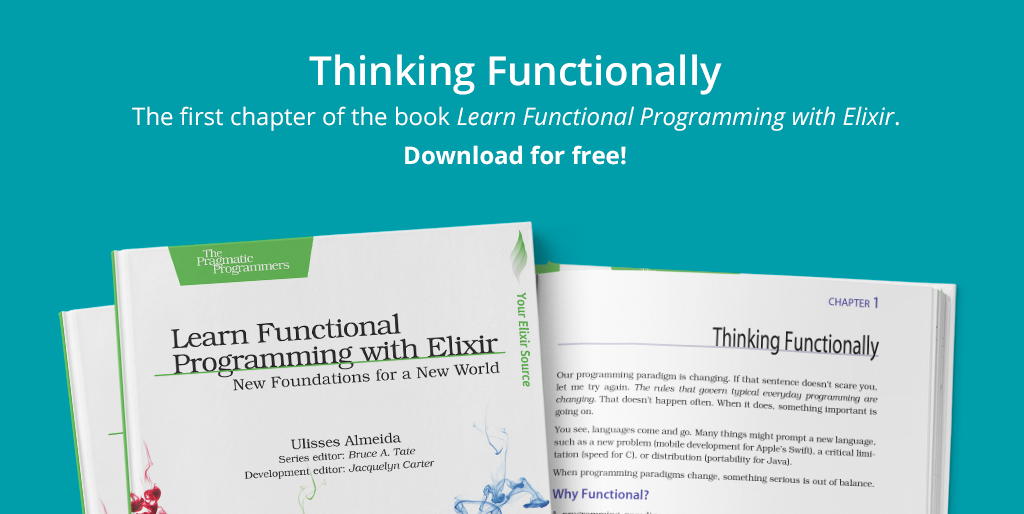 Get started in functional programming techniques and the Elixir language. Interested? Download the first chapter for free.

The first Elixir book I read was Introducing Elixir and that was only 18 or so months ago so I think you’ll be fine with it to give you an introduction and get you going. I really enjoyed the book and it was clear enough that the language clicked with me quickly.

That is my typical recommendation. It reduces the number of new concepts one has to deal with when learning Phoenix and builds the Ecto skills to a much more useful level (though SQL still is a separate pre-requisite).

The first Elixir book I read was Introducing Elixir and that was only 18 or so months ago so I think you’ll be fine with it to give you an introduction and get you going. I really enjoyed the book and it was clear enough that the language clicked with me quickly.

This pretty much answers my question.

This pretty much answers my question.

Read it an enjoy it. If there are things which don’t make sense come here and ask or look in the docs. It’s not going to make you an expert but it will introduce you to Elixir and you’ll get a good feel for it.

I also understand liking paper books and I usually end up with both paper and eBook copies. I can’t read pages and pages of text from a screen but love having searchable text and the ability to have multiple books on a single device like an iPad.

Anyway, I hope you enjoy the book and welcome to Elixir!

Programming Elixir (Intermediate) or Elixir in Action (Intermediate): They are similar in essence, both are suitable for beginners with Elixir and functional programming, if programming isn’t new to you, then you’re good to go.

Both are worth it, sadly I can’t make a fair review for “Learn Functional Programming with Elixir”. If the book you mention focuses in Elixir 1.4, then some modules are deprecated, like HashDict or HashSet.

Good luck in your journey!