The OOP Concept according to Erlang

To me an OOPL has the following properties:

All this stuff about classes and methods is “just” a way of defining and grouping
abstract data types.

Inheritance is just a hack - in Erlang/Elixir you can just send a message down a
chain of processes until somebody recognises it.

In my opinion Erlang/Elixir/Pony etc are the only languages which can be called
OO.

Java/C++/Smalltalk do not protect objects - send a “message” (or evoke a method) that leads to an infinite loop and you screw up the system.

Erlang/Elixir are rather nice send a message to a process that sends the process into an infinite loop and you won’t even notice it.

And yes you can break beam code - but you have to try hard.

Would anybody care to share some links or talk?

Object Orientation isn’t some kind of gold standard that one has to aspire to “to become one” with the “one true way”. I’ve always viewed it as a set of heuristics that attempt to manage complexity (with a different kind of complexity).

Now some people in other areas are trying to advance OO like Trygve Reenskaug and Jim Coplien with DCI - Data Context Interaction (though a lot of it seems to revolve around the idea that today there is too much focus on programming and not enough on analysis and design in order to minimize accidental complexity early).

The sending messages is big for me. Learning Smalltalk first and then Ruby I always wondered why everyone talked about sending message “that objects would choose how to handle” - yet you never get the message itself (yes yes method_missing, yes yes).

Hence it is philosophically closer to what is described in OOP in that sense. Or well not just erlang but actor-like systems in general.

@peerreynders Jim has been on DCI for a while… I find the idea interesting but haven’t seen it take off in practice. For me the core of DCI is more that lots of interactions are contextual and lots of code is only ever used/needed in specific contexts while it usually lives together in big objects which is counter productive. As such it can also be used as a guidelines for better design imo

Not sure about any Erlang projects, but some longer time ago I have found this awesome Elixir library:

It’s not a really big repository, so it should not be a bigger problem even for beginner to rewrite it to Erlang.

You just can’t resist can you … April 1 isn’t that far off!

Jim has been on DCI for a while…

Because of Multi-Paradigm Design I like to keep track of him and the shift towards roles rather than classes seems interesting. In any case his talks like What went wrong with the IT-industry? are entertaining at least, if opinionated.

Thanks for the talk suggestion, I’ll put it on to watch. Jim is interesting/opinionated/polarizing. As I said I found DCI to be interesting, didn’t quite appreciate the way he conducted himself at the conference though - taking on stage time to make fun of a bug in the conference website (it was only visible in the university internal network) isn’t exactly something I appreciate

Via the links I found https://www.goodreads.com/book/show/8739006-lean-architecture. Also see the not too positive bookreviews. Not my cup of tea this book.

I would also like to point out that the term OOP has two completely different meanings: 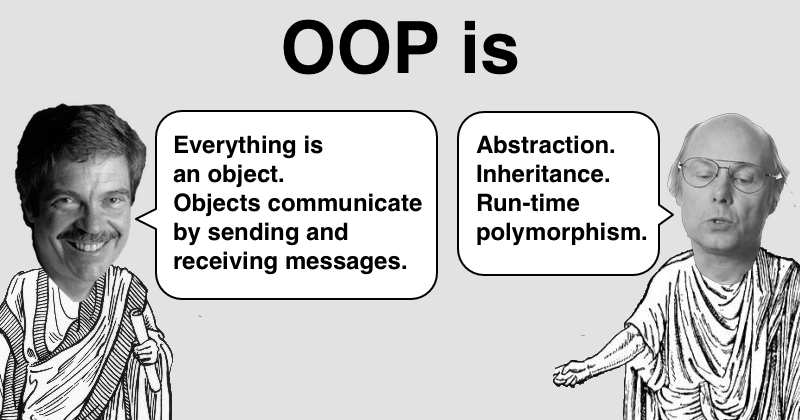 TL;DR There is no one “canonical” definition of OOP. There are at least two of them. From my POV there are two big definitions, which deserves separate names. I named them after biggest advocates. Those two definition have some differences and some...

Which has a reasonably good summary

When we were developing Erlang @rvirding and I read every book we could find that described OOP and came to the conclusion that there were no definitive descriptions of what an OOPL was it was more a case of “you can recognise an OOPL when you see one”.

The idea was pitched that “all you had to do was rewrite everything in C++ and make a code base of stuff you could inherit” and you could fire most of your programmers and reduce your software costs to near zero - didn’t happen like this though. (But it took ten years to discover this :-))

I had always (and still) viewed this reuse stuff as total nonsense - functional re-use is possible but the non-functional properties of a program cannot be re-used.

If a program is buggy the inherited program will be buggy …

Stroustrup talks about OOP without inheritance:

I don’t know if this fits in here to 100%. But in this great talk Scott Wlaschin compares OOP patterns with FP.


Before watching, try to make a guess what is the equivalent FP pattern to each OOP pattern.

@PragTob You are so right and it is always tricky to discuss this with people they just have one paradigm.

That highly reminds me of a book I want to re-read/a book that helped improve my ruby code a lot at the time: Functional Programming Patterns in Scala and Clojure - can recommend it to everyone using a multi paradigm language or people new to elixir/FP

Wow! It’s an honor to hear from you! Enlightening! Thanks!!!

I love that we have Erlang royalty here

I know we’re going a bit off topic here, but it’s honestly super great of them to be around and occasionally answer things like these which is super enlightening - I still remember that on one of my first posts about TCO @rvirding chimed in

Of course doesn’t only go for the erlang peeps but also José, Michał and all the other “implementors” being very helpful around here. For erlang peeps it’s especially nice because this isn’t the “erlang forum” (although it kinda is

). Love it when communities work together closely.

The idea was pitched that “all you had to do was rewrite everything in C++ and make a code base of stuff you could inherit” and you could fire most of your programmers and reduce your software costs to near zero - didn’t happen like this though. (But it took ten years to discover this :-))

I had always (and still) viewed this reuse stuff as total nonsense - functional re-use is possible but the non-functional properties of a program cannot be re-used.

Interesting, but IMHO we are always going to reinvent the wheel as the knowledge gets lost among the tens of thousands of objects/functions (the bigger the code base, the worse it becomes…). So even if functions with no side effects are more reusable in theory, does it really matter in practice?

I know we’re going a bit off topic here, but it’s honestly super great of them to be around and occasionally answer things like these which is super enlightening - I still remember that on one of my first posts about TCO @rvirding chimed in

Of course doesn’t only go for the erlang peeps but also José, Michał and all the other “implementors” being very helpful around here. For erlang peeps it’s especially nice because this isn’t the “erlang forum” (although it kinda is

). Love it when communities work together closely.

I kindof see them as our granddaddies - not because of age or anything like that, but in the sense that Erlang is a parent of Elixir, and we, the community, are Elixir’s own children

Grandparent-grandchild relationships are always special imo, and it’s clear to me that so many of us hold Robert, Joe, Mike and the rest of the Erlang crew in such high regard. I sincerely hope they feel that love and I also hope we are doing them proud, and that whenever they see us or Elixir doing well, that they feel immensely proud themselves, because we are a part of their family and ultimately, whenever anyone thinks Elixir, they also think Erlang

I actually had an opportunity to ask Alan Kay about current developments of OOP and the original definition being much more closer to Erlang than anything else we commonly see.

His response seems to line up with our community’s thoughts on the topic: 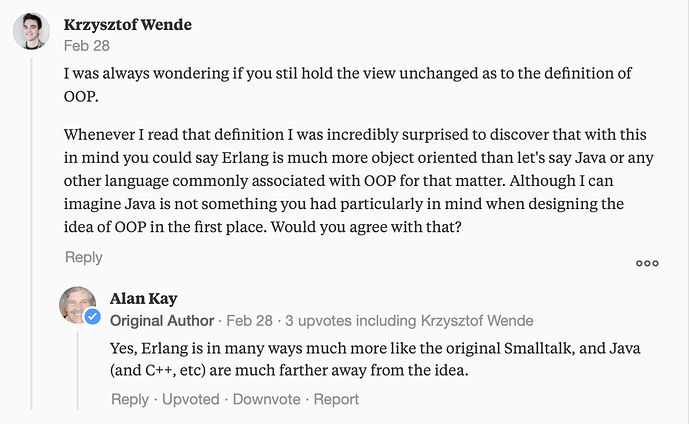 As I understand it the vision was as “objects” as a user metaphor, a mental model for the visible things that can be interacted with on-screen. Granted that notion transferred to Smalltalk for straightforward mapping of (visual) user objects to code.

By their nature those (visual) objects probably relied heavily on the Dynabook runtime environment - the objects being the proverbial bananas supported by the Dynabook jungle.

IIRC in the 1990’s the Coad/Yourdon books

seemed to lean on simulating real world objects to justify the OO approach.

It’s shortly after that OO took on a life of it’s own, as a potential, universal problem solving/modelling approach. Therefore languages were quick to add classes

OO held on generally as strategy for organizing/partitioning code and as a means for encapsulation/information hiding.

However optimal partitioning is non-trivial so it is easy to get the (class/object) boundaries wrong and objects are not always the appropriate level of granularity for any one part.

So really Erlang or Elixir don’t have to be viewed in terms of OO as they choose to manifest the boundaries of their “parts” in a different manner:

Not every problem solving/modelling approach has to be grounded in objects.

To spawn, or not to spawn? explores the kind of boundaries you have to deal with in Elixir and Erlang.

Process and Stateness are they object? Questions / Help

Hey everyone, So I have been reading two elixir books Functional Web Development with Elixir, OTP, and Phoenix and Elixir in action. In the first book , it shows you how to hold state using Agents then later on changes the agents to GenServers. Now, I was starting to really understand what they were trying to convey, and the idea that kinda came up was that processes can be use kind of like objects to save your state. Now in Elixir in action, I don’t remember if it was the in book or in one of…

What I would like to see is an Elixir course that teaches the language from an OOP perspective.

I’ve read most of the PragProg books on Elixir and at best they make off-hand comments about similarities.

But it helps so much to have this fundamental assumption of processes being objects that respond to messages. And having things like Supervisor objects being your “main” object, etc.