I think I can now finally get back into reading PE1.2

Elixir related stuff I am doing? I have a character grinding healing potions in a browser game, does that count as elixir related?

Currently I do quite some stuff that is at least related to BEAM:

I am sure, that I missed one or two things…

I’m trying to setup my spacemaps

Is posting code and asking for thoughts/review something encouraged here? If so, what label would make the most sense? I find I still feel really clumsy when writing elixir code.

Do you want to join our team over there on exercism?

Is posting code and asking for thoughts/review something encouraged here? If so, what label would make the most sense? I find I still feel really clumsy when writing elixir code.

Maybe we need an “Elixir Programming” category? There’s an awful lot of ground between Learning and Advanced

I’m using Elixir to process some CSV files. It’s going much better since I figured out how the files are encoded. See this thread.

Trying to get rid of Dialyzer warnings on bootstrapped Phoenix application.

I’ve started writing my first serious Phoenix app which scratches one of our companies’ own itches. Still feeling kind of overwhelmed since I haven’t really learned a new language since I encountered Ruby some eight years ago. The performance is amazing though and the documentation and community are great for such a young ecosystem.

Hi! I have been learning elixir programming constructs thru online tutorials. Tried setting up a Phoenix API too.

I am currently working a new theme.

I am going to call it the Alchemist theme and it will be available for TextMate, Sublime Text, Vim and Emacs/Spacemacs 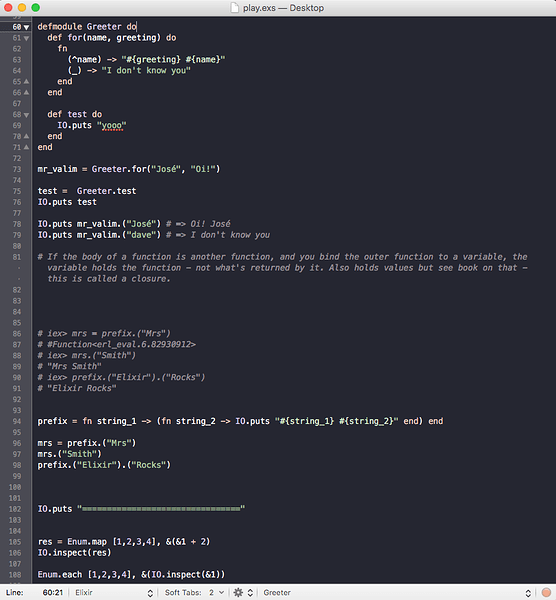 Edit: You can find it here: Introducing Elixify - a code editor theme for Elixir!

I figured out how to use GenServer to help me use the observer to find a problem in my code.

I’m waiting for my Pi3 and a nerves release supporting at least the basics such that I can experiment around with it. In the meantime I am planning around what to do with it.

Looks good on the eyes. How is it goin’ with this?

It’s mostly finished and I’ve been using it for the last few days in TextMate (it’s easier to make the theme for TextMate then port to the other editors than the other way around). I’ll give it a few more days and if I think it’s ok will start work on porting it over to Vim, Atom, Emacs, Sublime etc

It’s actually changed a bit since that screen

Would be glad to take a look at it when it’s ready :). Do you use emacs @AstonJ?

Which editor do you use? I’ll let you know when its version is ready for a test drive if you like

Sure just give me a buzz if it’s ready.

I usually use sublime text but have just started to look into vim. vim is great and I was hearing good things about emacs too with its evil mode. Then recently just read some articles about Spacemacs and Alchemist though haven’t dived into it yet since I am still lacking time to freely explore it at the moment. How is Spacemacs then?

I figured out how to use GenServer to help me use the observer to find a problem in my code.

Awesome!!! I didn’t thought about that!!

Look like I have plenty of emacsy thing to check in this thread. Cool!

I created my first Elixir thing :D. A phoenix web to show in as real time as I can the current position of the Buses in Gijón (my hometown). I am trying not to automate a deployment to production.