When AI is going to replace us?

I have been playing with AI recently and found GPT-J-6B model.

It’s quite impressive. You can try it on the web.

I tried this as input…

and got this result

It’s not even made to generate code

What do You think?! 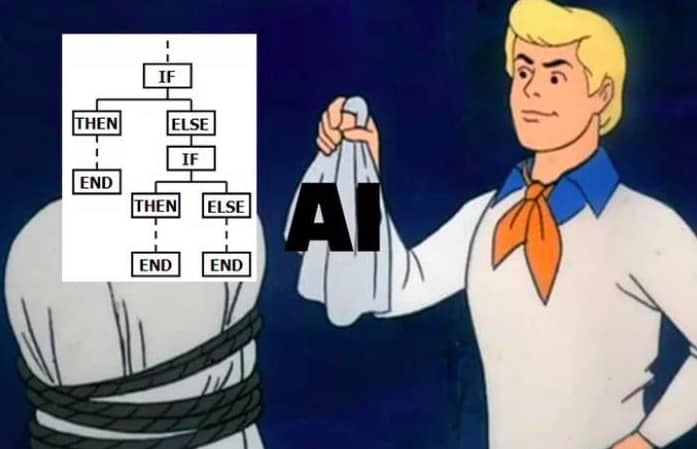 Jokes aside, I’ve also been playing with Github Copilot for some time and as a tool It does some cool tricks. But to say that AI will eventually replace us is too far-fetched for my taste haha.

I imagine that AI (in the near future) will become a lot more present in our lives in the sense that will allow us to abstract even more some workflows (like calculators for mathematicians), but I still seriously doubt that it’ll replace everything and everyone like some like to say - well, at least for any job that requires introspection.

The title is a bit provocative

It’s not the tool, but what we’ll do with it.

When people will learn the restricted subset of English language, that will describe their needs in concise and precise way… Oh, wait…

What makes me sleep well at night:

I will just put this here Koko:

What do think will be powering Skynet?

), but we do need to worry about it’s costs to everything, and if you’re curious just read renowned Microsoft researcher Kate Crawford’s latest book: Atlas of AI.

However, we do need to worry about computational governance, the infrastructure for which we are building and the reality of which we are racing toward. If you’re curious about that then there’s really one book to start your information journey, and that’s Harvard professor emeritus Shoshana Zuboff’s The Age of Surveillance Capitalism.

Disclaimer: Zuboff’s book was the final tipping point motivating me to go and make Metamorphic. But definitely both books above are books worth reading (especially so since we and our peers are the ones making and shaping our digital future).

Side note: this just made me think of Matrix 4 coming out.

Given the precipitous collapse in our earth’s ecosystems, and our complete failure to even feint at addressing the multiple fronts on which they are challenged (climate breakdown being only the most salient), it seems unlikely any “intelligence” (artificial or otherwise) could be any more dangerous than that of Homo (alleged) sapiens.

Considering the no-code movement what supposed to “replace” us a long time ago and i’m still waiting for that to happen… (and i use one of the most prominent one for clients projects, which ended up being more of a problem than a solution to anything…)

@thiagomajesk Github Copilot has pretty clearly copyright infringement and other niceties up it’s sleeve (it’s all about the money they can make out of it after all) to ensure that tool actually works somewhat properly, it’s not any time soon that i’ll use this. Using it is pretty much giving them the authorization to go further (and they will).

@crispinb Well that’s dark…and unfortunately, not really wrong. I’ve been participating for the best part of my adult life in various “mission” with a lot of different associations (Sea Shepherd, Pantera…). I must say, i didn’t find much hope in general. The situation is worse (imho) than it was when i started taking an interest. I mean, when convincing people to refuse a plastic bag when they go get a piece of bread in the morning remains a somewhat difficult thing to achieve… (and the amount of various “excuses” i’ve got overtime could fill a dictionary).

@f0rest8 Thanks for the books, going straight to the list of “Must read now !”

On a side-note, one of the first thing i look for these days when considering using a service is where my data will be hosted (that is, the server provider for example) and i’ve been unable to find that information on Metamorphic website (note that i might have missed it…) ?

2 posts were merged into an existing topic: Metamorphic (Early Access) is using Elixir

Did the app generate the code ? To me it only generates some advice text.

Yes it did, but You will get a different answer each time because of randomness.

It is meant to complete the text You enter…

But because it was also trained on SO and GitHub data too, a side effect is when You enter start of code, it will try to complete it.

Another example, the bold text is my input.

once upon a time in the west there was a little kingdom ruled by a duke. And this duke, he was a very kind of man and liked by all and sundry but one thing worried him. He knew that in his kingdom was a wicked sorceress who was the meanest of all the mean and bad people of the world.

And he wished that he could have gotten rid of her and all her sorcery. But, you see, the sorceress was his wife and it was very difficult to get rid of her and there was always the danger of her turning him into a frog. And so he resolved that he would wait and one day when

Personally, I think AI is getting seriously oversold when people fret about it “replacing humans”; the results are amazing, but they show the limitations of the techniques very sharply.

For instance, consider generating images with VQGAN + CLIP - the output is usually “surrealist” because the technique successfully imitates features that remind humans of the prompt, but weird things can happen when a prompt can be interpreted in multiple ways.

My favorite example of this is the generated image for “a herd of sheep grazing on a lush green hillside by bob ross”; the operator’s intent was to affect the style of the painting, but instead the AI has imitated the signature haircut of the artist! 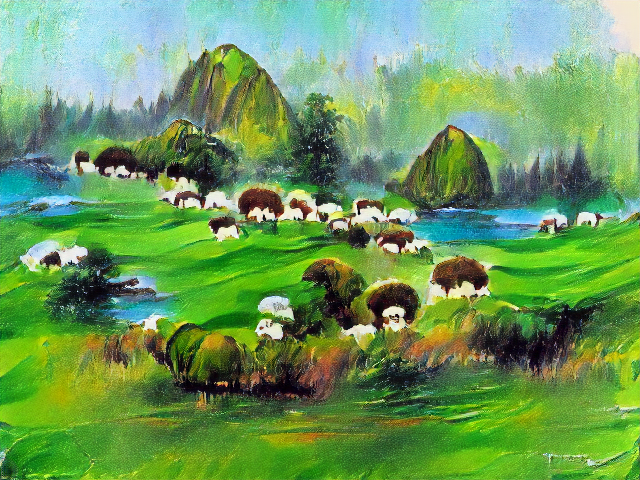 In an artistic context, this kind of conceptual free-association is interesting; it would be less so if the AI was generating accounting calculations.

Personally I think AI has outclassed humans in all games, including complex games as go.

My favorite example of this is the generated image for “a herd of sheep grazing on a lush green hillside by bob ross”;

But still a long way to go, until the creator understands what it did there.

I think there are 2 hurdles which AI has to cross in order to replace us software developers, and both of which I view as impossible for the foreseeable future:

Not that I think we WON’T get to a point where these 2 concerns are addressed - it’s a matter of “when” not “if.” I think it will be awhile, so we will likely see much more gradual change towards this future, including enhanced IDE capabilities and failure detection/prediction - both of which are only now in their infancy. So I think our jobs will be made easier by AI long before it renders us obsolete