Doesn’t it put it under /controllers/<context_name>/user_auth.ex? In that case I wouldn’t consider it as “into controllers” but as a “private” helper module for <context_name>_controller

Hm… Now I don’t recall how exactly I invoked the generator (and history’s no longer valid) but what I got is: 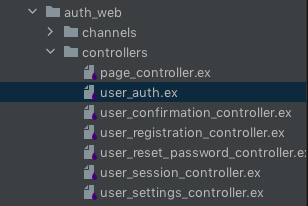 It puts it in controllers/user_auth.ex indeed. Those are exclusively controller helpers, so that’s the directory it should go to.

If it would be inline with the one existing helper module (views/error_helpers.ex) then it would be controllers/user_auth_helpers.ex though.

IMHO too that would be more consistent and understandable. Not that it’s a huge deal but a bit more consistent conventions around Phoenix wouldn’t hurt (again IMHO, while still having relatively fresh eye on it).

I felt the same personally, so I pulled helpers out to a separate directory