Elixir makes me happy! Since 2007 I have been on the road sharing what bits I’ve learned about Erlang, the BEAM, and OTP. It was a fun, but Quixotic decade. Folks I met saw the power, but of those thousands maybe 20 became Erlang devs. Then José arrived with Elixir and everything changed; the barriers to adoption began vanishing and waves of Ruby, Node, and .NET devs poured onto the ErlangVM.

Elixir is accessible and the community is warm, but even seasoned devs encounter lots of new and unfamiliar things (FP, processes, BEAM, OTP). The “unknowns’ leave newcomers with a thirst, and this session is a 40-minute chug-a-lug at the Intro to Elixir” firehose. It will be fun, fast-paced, broad, and deep. Afterwards Elixir will seem even more special, the ecosystem will be illuminated, and you will have the “why, what, and how” knowledge to confidently continue your Elixir journey well-hydrated and without so many “unknown unknowns.”

This talk is so great for those wondering what the Elixir fuss is about. If these 40 minutes can’t get you excited about the language, nothing can!

Great talk - and I loved how Bryan’s excitement showed throughout, he couldn’t stop smiling

I think this talk is now my favorite to recommend to people who have started dabbling in Elixir. It was very well laid out and presented. Thanks @bryanhunter!

Wow! Thank you all.

In November I’ll be giving a 45-minute version of this talk at FunctionalConf Bangalore. Any suggestions on the best use of those extra few minutes? I’m thinking distribution and hot-code loading, but I’m open for other ideas.

Use the extra few minutes to bribe the speaker coming up next to donate their time to you!

Seriously though, my biggest issue with your talk was that you didn’t have enough time! Personally I could have easily listened to you for another 40+ minutes. You’re a good speaker and you explain things in a very easy (and fun) way for people to grok.

In November I’ll be giving a 45-minute version of this talk at FunctionalConf Bangalore. Any suggestions on the best use of those extra few minutes? I’m thinking distribution and hot-code loading, but I’m open for other ideas.

I know it’s only been a few days since I watched it but I’m can’t remember exactly what was covered.

My thoughts on what to add:

Are the slides available anywhere?

Sorry! Missed your question from way back about slides. Slides and code are here: 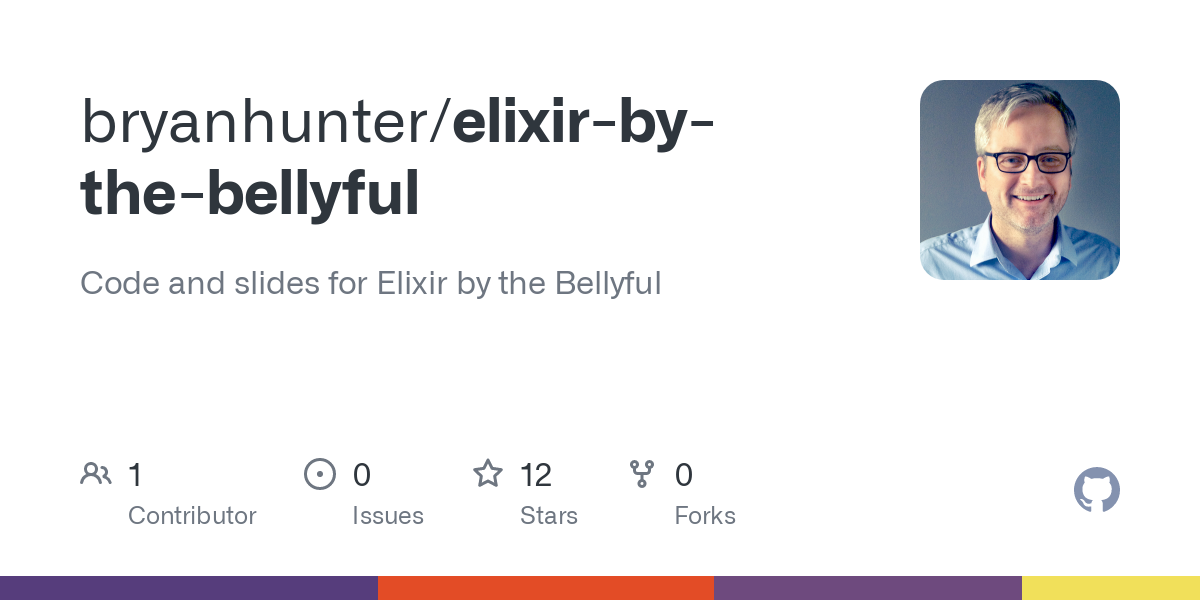 GitHub - bryanhunter/elixir-by-the-bellyful: Code and slides for Elixir by...

Code and slides for Elixir by the Bellyful. Contribute to bryanhunter/elixir-by-the-bellyful development by creating an account on GitHub.

Thanks for the link to the slides and code! By the way, your talk is still one of my favorites to recommend for anyone that wants to start learning about how Beam/OTP scheduling works