Hi. I’m Mark and over the past two and a half years, I’ve been teaching thousands of people my favorite programming language, Elixir, through video screencasts.

This project is a bit different. 5 Little Potions is a mini-ebook aimed at people new to Elixir programming or people who just want to have some fun making games with it!

Elixir is a descendant of Erlang, a programming language renowned for its exceptionally well-designed concurrency model, functional expressiveness, and rock-solid stability.

But while Elixir maintains Erlang’s concurrency model and runs on the same solid VM, it was designed with the goal of combining the joy and beginner-friendliness of Ruby with the power and scalability of Erlang.

Next you’ll start working with Elixir Structs in a simple board game, before moving on to explore Phoenix LiveView, simple web graphics and a sudden death game—Flappy Phoenix.

After that brief exploration, you’ll return to a more complex text adventure game and a final, more complex game (TBA).

This isn’t a comprehensive guide. It’s a playful exploration through a wide swathe of Elixir to ignite your curiosity to continue exploring on your own!g language, Elixir, through video screencasts. 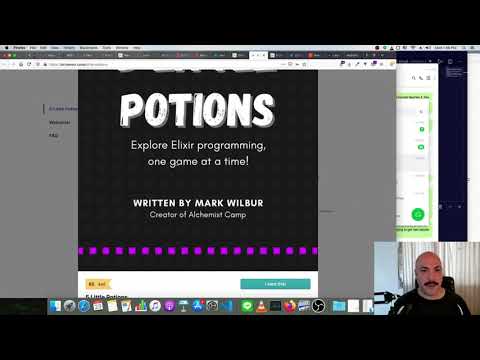 Note, this is aimed at beginners and many of this forums users will be beyond it. It’s aimed at programmers who want to start learning Elixir.

Also, if anybody would be interested in reviewing it or offering feedback, I’d be more than up for it!

I bought the book when I was on the train this morning, thats 5 to 6 hours ago. I haven’t received any information about how to proceed nor an access code so far. All I got was PayPals payment confirmation.

There should be a license key and a giant button that says “View content” in the email Gumroad sent you. That button will take you to https://alchemist.camp/little-potions/redeem, where you can enter the license key.

If Gumroad didn’t send you a license key, please email me and I’ll grant you access manually and contact Gumroad to see what happened.

I eyeball scanned my inbox previously and didn’t find “Gumroad”, therefore I now tried a search, its senders field was a human name, not company, therefore I haven’t seen it.

Thank you for the help!

I look forward to your feedback as I write this and thank you!