Advice for developing a library with Elixir and JavaScript parts. API/Documentation/Publishing/Redux

I am developing a library that unusually has a significant client part. In summary GenBrowser aims to give clients/browser an identifier that can be used to send messages to/from/between clients. In essence a pid.

The security model relies on signing addresses that are sent out of the server, that is why the signed address needs decoding on the server.

I am not very up to date on the front end world and so want some advice on how to proceed with this project.
Ideally I want to keep the whole thing in one project and use as much of the Elixir ecosystem as possible. However that might be limiting.

Advice on the JavaScript API

There are two options for working with messages received.

These names api’s come from their erlang world equivalent receive and handle_*. They look reasonably sensible in the JavaScript world but could probably be more idiomatic

The project has a JavaScript build step and the code is always to be used in a client.

ExDoc has spoiled me for ease of setting up documentation. In these cases I am probably just looking for the most standard/simple way of doing things

With my (limited) knowledge of redux I think that redux and GenServers look quite similar.
Hence the name of this project.
Do you think this is a helpful analogy when describing processes to JavaScript developers.

Within a single process or store there is a single state tree.
I often say that sending a message is like dispatching on a remote store.

Is there any better way of explaining things? Should I just say actor model and not confuse the issue with mentioning redux

You could take a look at how phoenix handles their js dependency.

As for the API:
I’d expect a callback driven interface. Promises are better for async results for a single action/task.

As for the API:
I’d expect a callback driven interface. Promises are better for async results for a single action/task.

Given the nature of a mailbox as a potential source of an infinite stream of messages (events) a more contemporary interface like Observable seems more appropriate (active implementations RxJS, xstream, Bacon.js, Kefir) - Learning Observable By Building Observable.

While I realize that await is a popular construct to make asynchronous code look more sequential, I believe that this is ultimately barking up the wrong tree given the mercilessly single-threaded nature of JavaScript runtimes.

On the BEAM strictly sequential code makes sense given that you can have millions of tiny processes for concurrency. Pretending on a single threaded platform that sequential flow of control programming is sufficient for more complex interactions will in my opinion ultimately run into a brick wall.

The real answer is to start writing code that composes event streams and let the underlying platform schedule what gets processed when.

With my (limited) knowledge of redux I think that redux and GenServers look quite similar.

Can you please expand on this line of thinking - i.e. what has lead you to this conclusion?

Redux is more like Agent since most of the effectful operations are strongly discouraged.
Most of the effects are handled with redux-saga or thunk. Redux-saga is a little bit like a worker, but there’s no mailbox.

The key difference is Redux simplified everything by dispatching the event to every possible listener, so there’s no such thing like pid at all. And it’s acceptable because in front-end we usually don’t have too much data.

And also all redux operation happens in a synchronous manner so there’s no need for a mailbox.

I’d expect a callback driven interface. Promises are better for async results for a single action/task.

Yeah so far I have used both. something listening for pings using the callback approach to send pongs.
But on the other side after sending a single ping the promise makes sense because it is waiting for a single pong

I believe that this is ultimately barking up the wrong tree given the mercilessly single-threaded nature of JavaScript runtimes.

I thought when using await it was essentially syntactic sugar for the same behaviour as a promise. i.e. other callbacks etc would work as normal

I thought that this could all be built on top of a callback interface.

I thought when using await it was essentially syntactic sugar for the same behaviour as a promise.

It is but (apart that I find async/await a bit of a tarpit with regards to refactoring) once you start using Observables, Promises come across as one-shot streams (when they resolve they deliver a single value and complete) and the async/await syntactic sugar becomes a “cul-de-sac” with nowhere to go when you need to move to streams.

So the first thing I had to do was to strip all the async/await out of the end user code before I could even think of introducing Observables/Streams.

That can be done. I’m most interested in what would be a good foundational API, because I know there are 100 different flavours of how to JavaScripts and there is no reason for this project to favour one over the other.

Thanks for the Gist that’s awesome. Rather a lot to lead a README with but I think I could certainly update the actual examples.

Rather a lot to lead a README

Well, that wasn’t really my intention. Those were simply the files that I changed to stage the next phase - introducing RxJS 6. So the next set of changed files are here:
https://gist.github.com/peerreynders/a0965c47cce31fb6a6677b90f0ca71cc

Connect.js is the module that I cobbled together in an attempt to wrap the current client API. It’s still rather simplistic given that only one single attempt is made to start a client.

Thinking out aloud here for an improved version:

For debugging purposes and selective error catching, it is useful to make reason an instanceof Error.

Understood, my approach was to use one of the more sophisticated methods to see if there are any glaring shortcomings. At this point I’m wondering how difficult it would be to deal with the EventSource directly.

The base API would need to accept an error handler (there needs to be some notion of the desirable action after any particular error) and there needs to be a way to cleanly close/dispose of the interface regardless of errors.

It might be an idea to make a Promise based API a separate, optional npm package (which uses the base callback API). That way it should be easier to bypass any unnecessary functionality.

At this point I’m wondering how difficult it would be to deal with the EventSource directly.

Not that difficult, it has a callback based API. So there is probably only limited value in using my layer that probably just obscures the underlying interface.

There doesn’t currently seem to be a way to “close” (i.e. discard) the client interface. Closing the mailbox seems to simply call the registered close handler - meanwhile the underlying EventSource doesn’t seem to be closed.

This is good point it is missing. So far my usecase has only been to discard the client when the browser page is closed, however I think it is something that is worth adding.

mailbox.close is really only to be used by the client code when it looses connection.

There currently don’t seem to be any opportunities for errors after the client interface has started . That makes me wonder whether there are places where errors are being thrown and not being converted to error values

I only consider it an error when a reconnection fails, loosing a connection is just a natural occurance.
The setHander function does take two callbacks the second one being called on close

So there is probably only limited value in using my layer that probably just obscures the underlying interface.

In hindsight it would have been useful to have something like this: 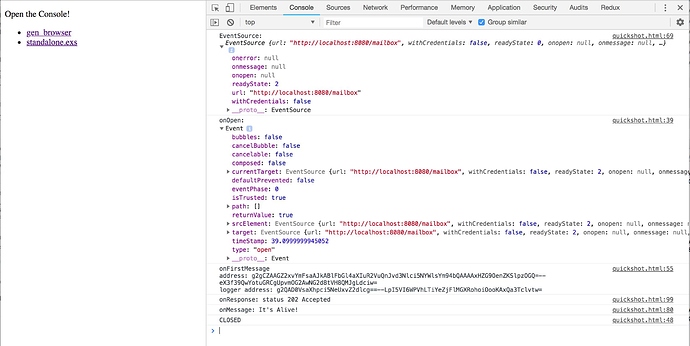 for a no-nonsense piece of code clearly illuminating all aspects of the interface from the browser point of view.

I’m not sure that providing a definitive JS library is the way to go - a demonstration one (or two) sure. For maximum flexibility it is necessary to lay bare all the options made available via fetch and EventSource.

I don’t think you’re in the market to maintain an ultra-flexible (read ultra-complex and bloated) JS library that will accommodate all the numerous edge cases for connection options that people may want.

An alternate means could be:

I don’t think you’re in the market to maintain an ultra-flexible (read ultra-complex and bloated) JS library that will accommodate all the numerous edge cases for connection options that people may want.

Your quite right here. Perhaps having something that stands as a demo is the way to go. And then I can also reference this implementation for an Rx specific way to go.

Re your alternative. I like it the goal. But the EventSource API doesn’t allow sending headers, so in the two step case you described above the first fetch must return some kind of token that can be used to start streaming the mailbox. If this was part of the path that is less secure, because servers often log request paths.
I.e. it’s easier for a hack to start streaming someone else mailbox.

The current system with special message uses getting a mailbox to always generate a new one, and uses the built in last-event-id structure to authorize in case of reconnection.

Would it be helpful if the message came through a different callback. The EventSource interface does allow types. so the message wouldn’t have to come in the same eventlistener. i.e.

It might be an idea to make a Promise based API a separate, optional npm package (which uses the base callback API). That way it should be easier to bypass any unnecessary functionality.

I have moved the client code in the project to a single dir. The project could have the code for more than one npm package, if you are interested we could add /rx_client. In the future it might make sense as a separate package/repo but while under development could be productive in the same repo.

Somehow your explanation jostled something loose. The result is a less boilerplate-y version of ServerEvents.js: https://gist.github.com/peerreynders/10634838fa91373db8aee11755e790fc

Painful reminder why I dislike mutability by default (which TypeScript does not fix).