Anyone who wants to speculate about this tweet from José

I hope it’s not the 2nd of september

Airing the 2 of February

Also i thought “airing” meant “diffused through the air”, i.e. broadcasted, so “released”. Not “recorded”.

Well, I am not an english native speaker, as my name suggest. I am speaking Voltaire’s lingua (Like You too?).

Wrote down some notes. Please correct if something is wrong or missing, took these right while listening

In a nutshell
Nx is a project that consists of a core library (Nx) and other pieces that depend on the core library. Together, they introduce things very much related to machine learning and associated fields. Nx introduces the ability to work with tensors, boosts Elixir’s ability and performance when working with numbers, and makes it possible to compile code for the GPU.

The work has been ongoing for 3 months. Everything is still in flux, but the following were mentioned.

There are 3 fronts where work is happening:

More information will be available on February 17 at the Lambda Days 2021 conference where José will be speaking.

“Hey, what did you do over Christmas?”

me: “I drank too much and tried to read a book”

One really great part of this is that very few changes to Elixir itself were required. Nx is built on top what is already there in Elixir. It’s really good of example of the language extensibility we can have with meta programming and that you don’t have to be an Elixir core contributor to build libraries like this.

Does that mean that it can use pattern matching with records given they’re translated to tuples at compile time?

I like the GPU part sooooo much!
If done right (as usual from JV and the team) it would be “THE THING”!
Because there’s plenty to grow from here.

Ok that is good to hear. I imagined redefining the + operator would be quite a fundamental change.

I wish it was named TNT (e.g. this new thing from Jose’s benchmark) and it would boom like TNT too

Ok that is good to hear. I imagined redefining the + operator would be quite a fundamental change.

as you can see the implementation is quite straightforward!

A great summary was already posted above. Additionally adding a story.
After looking at the benchmarks, A person guessed they are doing it on GPU, sshhh keep it secret… then he was invited to the project!

summary of the most awaited Project Nx. @josevalim @elixirlang @ThinkingElixir Please listen to podcast for the journey. thinkingelixir.com/podcast-episod… Pardon us if any mistake in summary. https://t.co/O72vEn9pOR 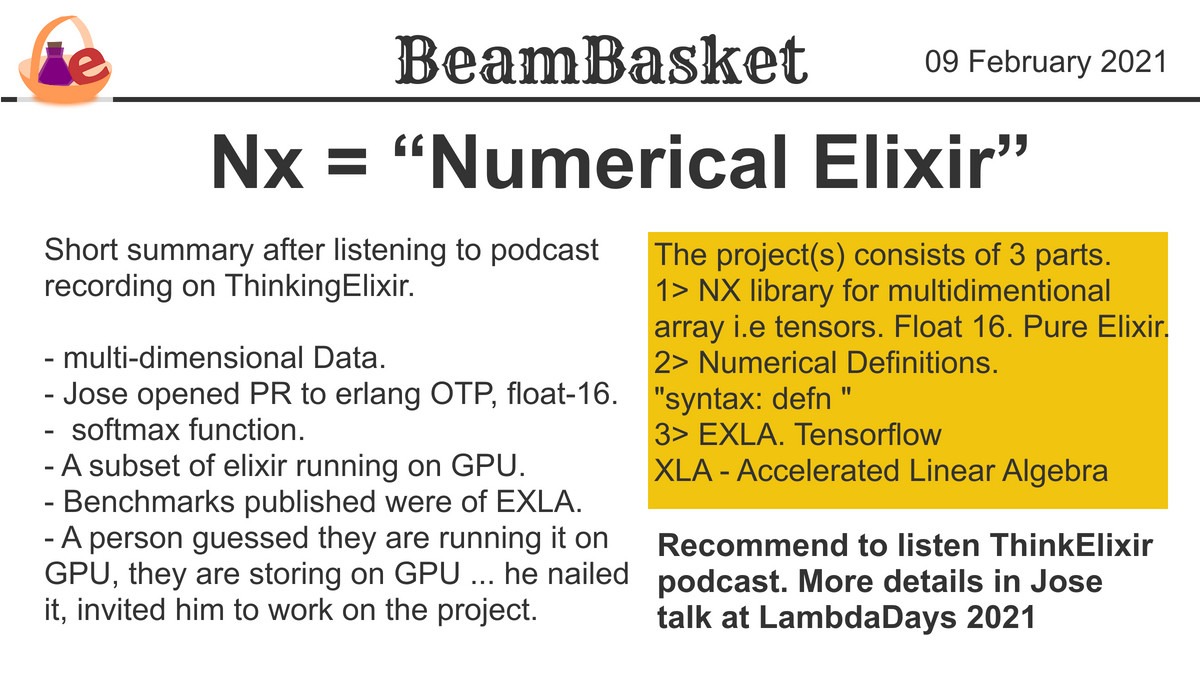 I am SUPER excited about Nx

I feel that Elixir is a great language in which to express numerical computation of the sort that is done in machine learning, just we didn’t have the right low-level support for it. That is, until Nx!

Does it work only on Nvidia GPUs or also on AMD ones?

Afaik most tooling in machine learning does work with CUDA, so Nvidia GPUs.

XLA has a ROCm backend targeting AMD GPUs so the XLA Nx backend will support AMD. I’ve tested most of the project on an AMD GPU and it works, but we primarily test on Nvidia GPUs so there may be more issues when working with AMD GPUs. I also know there are only a few ROCm enabled AMD GPUs, but I’m not as familiar with the ecosystem.