Are you all in on LiveView? How are you using it? 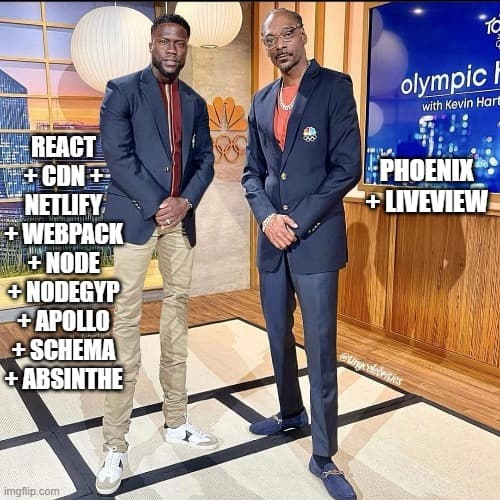 LiveView has me quite excited. The possibility of building a simpler architecture that ultimately leads to better user experience and better developer experience is compelling.

Anyone out here using LiveView in production today? What’s your experience like?

Been using Liveview in production since 0.1.0. The cognitive overhead is much lower and I can’t say enough good things about it. Simply put, it made a herculean task of building desktop-like software, merely difficult. That is truly innovation. Fire And Motion – Joel on Software covers my thoughts pretty well on this. While everyone else is busy keeping up with the tech and wasting their time, liveview just works.

Here are some notes:

Yah, what can I say really. Liveview is fantastic.

I’m a one-man shop, having grown quite a bit tired of NodeJS / VueJS endless changes in direction / way to many packages required to make a web app (half of which, only used for development) and a number of other things like testing (i’ve used Mocha and Jest, both of which remain a pain to use IMHO) which all had a part in my decision to go for Elixir/Phoenix/LiveView. Considering the app i’ve moved over is about 75% of my incomes, and a sizeable amount of clients which i all know personally and we’re relying on me to not mess that up, i didn’t take the change lightly (obviously). But it really was all about seriously alleviating the load required to update and maintain my app (and by extension, my happiness in getting up and doing my job which was far from stellar prior to the change) while making sure for my clients that the change would be mostly invisible and/or at least only for the better.

About a year ago (June 2020), i started the rewrite, choosing to learn along the way everything i needed (including LiveView). After all, an actual app where i knew what i had to do, but not really how to do it in my new stack was a good way to learn (and i’ve always done it this way in the past, without much issues so…). I won’t bother everyone discussing everything since it’s about LiveView. 3 months ago, i finally put in production the rewritten version (i use Scalingo) and since then, and i have barely got any issue at all:

I’ll resonate with what @tj0 said, LiveView is fantastic

. I know often the discussion is about big companies using the stack you like, but i’ll say that at the very least, for small teams or like in my case, single developer, LiveView seriously ease the amount of work required to make and maintain an app that requires SPA-like stuff. Over a year down the line, i can only say that i’m fully satisfied with my choice and i’m starting to look towards contributing back to the community (still have to get past the damn impostor syndrome, but i’ll get there

Hi, do you happen to have a public link to your site so we can check it out?

Also, would you be open to coming on my podcast to chat all about how you built and deployed it? It would be really nice to have a very LV focused episode.

No, i don’t have any public link (yet). I’ve always relied until now to more conventional (old-school

) ways to get clients (like i said, i know all of my clients personally). It’s probably going to change in the future (the public link, not the personal stuff), but that’s not really a priority.

I’m usually not “comfortable” with things like talking on something like a podcast (not that i ever get the offer to do so), but that’s one way to help the community, so i’ll be down to try. It won’t be right now though, as i’m currently dealing with a lot of stuff (both professional and personal). It should cleared out by the end of the year / beginning of next year, so if you’re still interested by then, i’ll make the room for it

If you want to set a calendar reminder to contact me then sure.

Thank you @tj0 and @shad for the detailed and precise feedback coming from your dev and prod experiences. I have taken notes on what works and what could improve. If all feedback was written like this, my life would be much easier.

I’ve been using LiveView since 0.14.8 and am currently using the 0.15.7 with Metamorphic in production.

I just relocated, absolutely fried, and am still settling in (working on boxes right now) from my last post, so I may forget some details of how I’m using LV but essentially:

I’m currently at the early stage of the Early Access phase for launching Metamorphic, so not everything is completely ready yet (I’ve had to settle for 3 main features at launch rather than the current 8 that are on the drawing board).

If you visit the site, I am now taking sign ups and will be slowly rolling out invite emails to people who’ve signed up in the next several months.

But, some things currently working on for Early Access:

It’s also unclear how my ETS strategy for handling in-session, temporary decryption of people’s photos will perform under heavy use. However, I’m currently running on very under-powered production hardware (only 1 cpu) and plan to scale that hardware as the number of people using the service grows.

I’m growing bleary-eyed so I’m going to leave it at that. But, overall, I am definitely all in on LV. It’s such a wonderful programming experience (and looks to be improved with 0.16 from the changelog).

Just to follow up on my own post, I’ve been updating LV to 0.16 and it’s simply amazing!

Without changing any of my existing code I’ve already noticed a significant speed boost to the load time for the settings section of Metamorphic (with the tabbed components) that I mentioned was loading rather slowly previously (speed increase has been seen even on my current Early Access single CPU production environment).

Also, the ~H is just incredible! I was playing around with switching back and forth between the ~L and ~H and removing HTML tags and seeing the ~H render an error with a clear and specific solution letting me know that I forgot, for example, end of file reached without closing tag for <div> or missing a closing <h1> tag on line 24. If you’re not using the ~H then you can make those little typo/omission errors and you won’t be alerted to anything wrong in the browser.

I know everyone’s been talking about these kinds of improvements, but to see it in action is simply magnificent.

Thank you again to everyone in the community and on the teams making these frameworks/libraries/languages so amazing.

Developer happiness + experience just got a super boost with LV 0.16, thank you!

Emails have been incredibly annoying to configure for HTML with Tailwind (using the latest). When I test the built-in HTML preview client with Bamboo the email looks exactly how I want it to look. But, when I perform a real-world test, I notice that my email client is stripping away the HTML and my button is no longer an awesomely styled button but the base HTML. I’ve since opted to just style the emails simply until I can return to figuring out the discrepancy that is occurring.

somewhat (/totally) OT - but html emails is a whole special thing since there is not a few browsers, but 90+ different email clients…

litmus.com used to have a free tier, but maybe give their free trial a run just to get an idea of the complexities involved Get email testing for error-free emails with Litmus Email Previews

I posted in August about my Liveview usage. For those interested, I documented the entire project journey from prototype to production in detail.

The project was built over roughly 3 years,consists of 20k lines of elixir, 5k lines of templates, 1k lines of scss, and 300 lines of javascript.

Hope it helps someone.

I couldn’t find what your project is. Curious to know

Ha, yes, that’s cause I didn’t mention it.

To be honest, I wrote this after reading underjord’s blog about liveview and after it was all done, I was almost ready to delete it. But then I showed someone and they said that it might be useful, so I posted it.

Happy to discuss technical aspects though.