Could someone please explain me what is a bitstring?

And the difference between bitstring and binary.

Here is some code that should make things clearer:

If you want to have a deeper understanding of the subject and are willing to invest half an hour to appreciate it, I strongly recommend the following video:

Really useful, really interesting, loved every minute of it.

Thanks @jaysoifer! I also wrote some blog posts covering some of the talk topics in a little more depth:

@kostonstyle The way I phrased this distinction was:

In Elixir, a “bitstring” is anything between << and >> markers, and it contains a contiguous series of bits in memory. If there happen to be 8 of those bits, or 16, or any other number divisible by 8, we call that bitstring a “binary” - a series of bytes. And if those bytes are valid UTF-8, we call that binary a “string”. 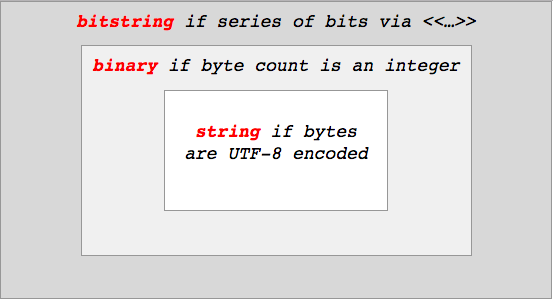 If you don’t understand what it means for something to be “UTF-8 encoded”, the first blog post should help.

Is a bitstring or binary, that contains number 3?

Since you do not specify a size for that given element it is assumed to be 1 byte. So the variable a does hold a bitstring of length 8 or a binary of length 1, and should be even a string (while not printable, it does only contain valid codepoints)

Remember the picture from above, every string is a binary and every binary is a bitstring, but not necessarily the other way round.

It is both, a quick test shows