As you might know from this thread, I’m working on a presentation.

Following a tour of Erlang history, I have a slide which reads:

“If Erlang is so great, then why should I bother with Elixir?”

On the following slide, I mention that Erlang has a somewhat alien syntax, since it was influenced by Prolog and Smalltalk. New programmers can find that scary and off-putting.

I go on to mention that one of the reasons to choose Elixir is that the syntax is more modern, familiar and user-friendly than its big brother, Erlang. I mention that is feels kind of Ruby-esque. Of course, I also point out that Elixir only looks like Ruby on the surface and that it is fundamentally different.

In order to make this comparison more immediate, I would like to show some semantically equivalent code-snippets from Erlang and Elixir, side-by-side. They need to be short enough to fit on one slide.

Some of the attendees have never seen Erlang or Elixir code before. I have not shown any code examples up until this point in the presentation, as it is very high-level.

I’m struggling to come up with some good examples that show off the differences between Erlang and Elixir. Preferably, it would highlight some unique features as well, e.g. pattern matching.

Could I ask for your help? If you wanted to illustrate the syntactical differences between Erlang and Elixir, what do you think would be some good (and terse) examples?

I will also refer to this forum thread in my presentation, so attendees can see more examples.

After a few hours of Googling, I discover that we have this page on the official website

That’s pretty much exactly what I was looking for.

But if you have any other examples, I would gladly take those as well!

For the curious, here is the comparison slide I ended up with: 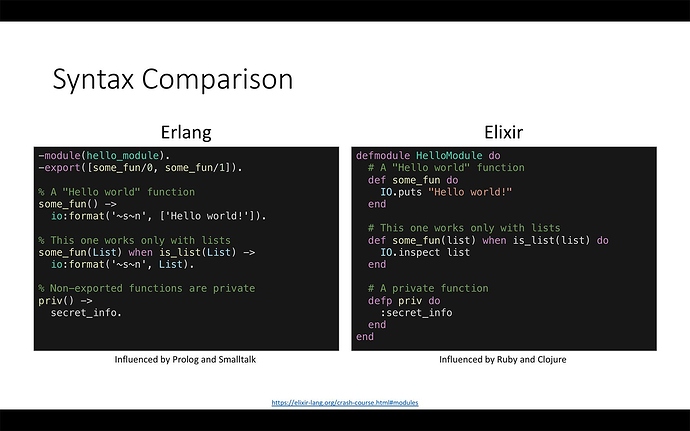 I might change it or add a few more.

I’m not sure how much Smalltalk influence there is in the syntax. Prolog is the main influence I’ve heard about.

One other thing that might fit on the slide is to have a second clause for some_fun/1. In Erlang you’ll need to separate the clauses with a semi-colon, but Elixir has no explicit syntax for that.

I’m not sure how much Smalltalk influence there is in the syntax.

Yeah, me neither to be honest. I just joinked’ that part straight from Wikipedia

One other thing that might fit on the slide is to have a second clause for some_fun/1.

This slide does not only compare syntax. It also swaps out functions from the stdlibs.

Additionally you use atoms (single quotes) on the erlang slide, where you should use strings (double quotes).

And IO.inspect is more like using ~p in :io.format, as ~s will fail with badarg when given a tuple, while IO.inspect will happily print it out. Also a noteworthy difference is, that :io.format returns :ok, IO.inspect returns the inspected value.

This slide does not only compare syntax.

Yes, it does show more than only syntax. Maybe that’s a good thing?

My goal is to have one or a few code snippets to illustrate differences between Erlang and Elixir. I suppose I could have been more precise about that in my post (syntax only is too narrow).

I will rename the slide to only “Comparison” instead of “Syntax Comparison.”

Do you have any ideas of what might make for a better example?

For a general comparison of language and how to use it, it is sufficient, as soon as you replace the singlequotes by doublequotes in the io:format examples.

For a general comparison of language and how to use it, it is sufficient, as soon as you replace the singlequotes by doublequotes in the io:format examples.

Thanks for the tips!

Yes, it does show more than only syntax. Maybe that’s a good thing?

If you desire is to show how Erlang and Elixir syntax are different then it might not be such a good thing.

However the difference between these two languages is much more than syntax. Do you have other slides to cover things like:

Do you have other slides to cover things like […]

Thanks for the tips!

This will be a very high-level presentation of about 45 minutes for people who have never seen Erlang or Elixir before and some have never programmed in any language.

I do mention Hex in there, though (and other tools).

Those areas you mentioned are also interesting, so I might include those in some future talks at our newly created Meetup group. Can’t have too many topics from which to choose!

If you want to compare Elixir and Erlang, then I recommend you look at some of José Valim’s presentations from the 2015 timeframe. Here’s one example:

In those days a lot of the Elixir conversation focused on just that - what is the difference between Elixir and Erlang, and focused on how syntax was not the primary driving force.

Ah, nice—Thanks! I haven’t seen that one yet.