hi everyone, how can i mix deps.get when im using docker?
whenever i run docker-compose run web mix phx.new hello and press yes, it didnt get past mix deps.get

sorry if its a desperate question, im new to docker and I tried numerous sample docker setup via github.

My first lucky guess is that the container you are running deps.get isn’t configured to sustain the data mix is creating/downloading. If you can put a minimal setup of your codebase/environment anywhere on github, I would be happy to have a look on it for you.

hi @kynoshi thank you for helping me out.

im using this setup. im doing as simple as I can just so I could understand every step.

The docker compose file you uploaded on github is a bit different than the one you put on in this thread. But that’s irrelevant to your issue anyways.

You do not have an elixir issue, rather than a simple folders confusion and/or docker learning opportunity. Setting up the phoenix project using docker-compose run web mix phx.new hello runs well and uses /app as your current workfolder.

When you try to update the elixir dependencies using docker-compose run web mix deps.get you are STILL working inside the /app folder, but you want to run the command inside /app/hello where the mix.exs is located. For a better illustration of what this means, see the screenshot below.

I recommend giving docker-compose run web /bin/sh a try, to fiddle around a bit inside the container and to get a better mental model of elixir projects inside a docker container. 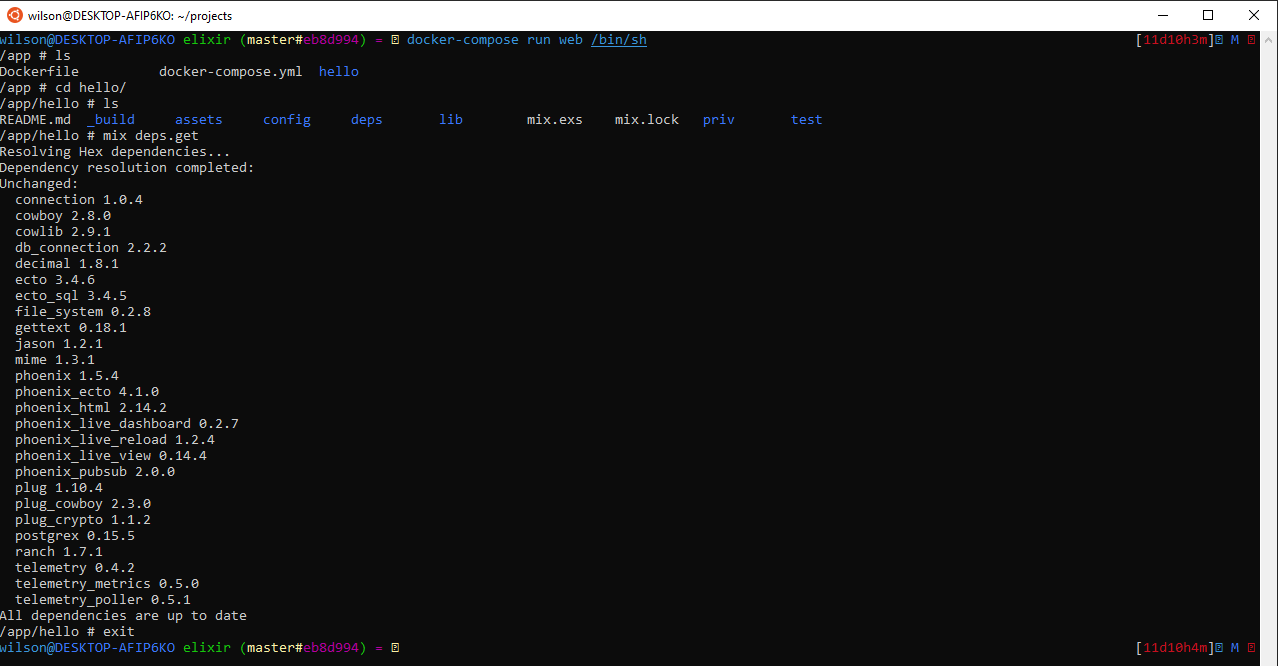 oh got it thank you! yea im confused where should i run the commands

So coincidentally I blogged a couple of days ago about using docker and docker compose with elixir.

The idea was to setup a dev environment with docker as the only dependency needed.

Then I did two things to try to make things simpler:

The post is in spanish, so i won’t shamelessly plug it here, but I added all the code on this repo (there are numbered branches that show the steps involved)

@emoragaf thank you for helping. You added node in Dockerfile, how can we achieve the same thing with docker-compose.yml?

I guess that you could try to find a base image (or create one and publish it) that already has all the os dependencies that you need. And only define a docker-compose.yml

But in general I would create a Dockerfile for each project