“(ArgumentError) adapter Ecto.Adapters.Postgres was not compiled, ensure it is correct and it is included as a project dependency”

I urgently need help in the Phoenix and postgres installations, something went wrong with postgres dependency when I tried to mix ecto.create , then I attempted to correct it (i changed in the mix.exs to {:postgrex, ">= 0.10.0"},… still not working), but other errors appeared. Would it be possible to guide me? Or even advise on how to uninstall the whole set, so I can do it from the beginning? 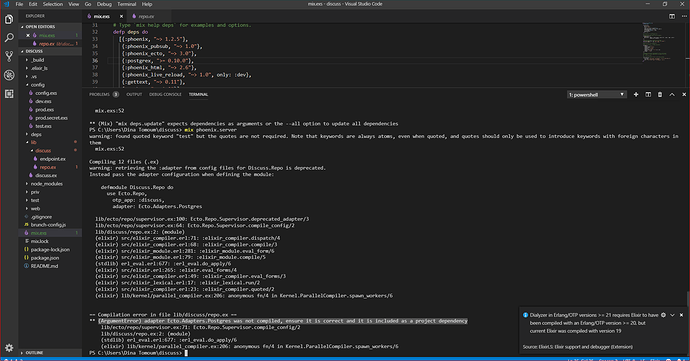 Also another problem appeared regarding erlang/OTP (it appears in the same screenshot on the right bottom.

Thank you , and hope I am not causing any inconvenience

The warning in the lower right can be fixed by installing a version of elixir that has been compiled with an erlang version >= 20. How to do this depends on your system and how you installed elixir and erlang originally.

I can’t help you with the other error though.

Images are often hard to read, don’t necessarily contain all of the relevant information and are not mobile friendly.

When things go wrong, things tend to get complicated fast.

Well, i realised the mistake is quite silly. in the version i am using, i should have typed phx instead of phoenix when creating new project. And the other problem resolved by installing another version.
Thanks for you help. Highly appreciated

thanks a lot, installing a different version worked.