Over the last releases, the Elixir team has been focusing on the compiler, both in terms of catching more mistakes at compilation time and making it faster. Elixir v1.11 has made excellent progress on both fronts. This release also includes many other goodies, such as tighter Erlang integration, support for more guard expressions, built-in datetime formatting, and other calendar enhancements.

Following Elixir v1.10, we have further integrated with Erlang’s new logger by adding four new log levels: notice, critical, alert, and emergency, matching all log levels found in the Syslog standard. The Logger module now supports structured logging by passing maps and keyword lists to its various functions. It is also possible to specify the log level per module, via the Logger.put_module_level/2 function. Log levels per application will be added in future releases.

Elixir v1.11 builds on top of the recently added compilation tracers to track application boundaries. From this release, Elixir will warn if you invoke a function from an existing module but this module does not belong to any of your listed dependencies.

These two conditions may seem contradictory. After all, if a module is available, it must have come from a dependency. This is not true in two scenarios:

This new compiler check makes sure that all modules that you invoke are listed as part of your dependencies, emitting a warning like below otherwise:

This comes with extra benefits in umbrella projects, as it requires child applications to explicitly list their dependencies, completely rejecting cyclic dependencies between siblings.

In Elixir v1.11, the compiler also tracks structs and maps fields across a function body. For example, imagine you wanted to write this code:

If there is either a typo on the :age field or the :age field was not yet defined, the compiler will fail accordingly. However, if you wrote this code:

The compiler would not catch the missing field and an error would only be raised at runtime. With v1.11, Elixir will track the usage of all maps and struct fields within the same function, emitting warnings for cases like above:

The compiler also checks binary constructors. Consider you have to send a string over the wire with length-based encoding, where the string is prefixed by its length, up to 4MBs. Your initial attempt may be this:

However, the code above has a bug. Each segment given between <<>> must be an integer, unless specified otherwise. With Elixir v1.11, the compiler will let you know so:

Which can be fixed by adding ::binary to the second component:

While some of those warnings could be automatically fixed by the compiler, future versions will also perform those checks across functions and potentially across modules, where automatic fixes wouldn’t be desired (nor possible).

Elixir v1.11 features many improvements to how the compiler tracks file dependencies, such that touching one file causes less files to be recompiled. In previous versions, Elixir tracked three types of dependencies:

Elixir v1.11 replaces “struct dependencies” by “exports dependencies”. In other words, if A depends on B, whenever B public’s interface changes, A is recompiled. B’s public interface is made by its struct definition and all of its public functions and macros.

This change allows us to mark imports and requires as “exports dependencies” instead of “compile time” dependencies. This simplifies the dependency graph considerably. For example, in the Hex.pm project, changing the user.ex file in Elixir v1.10 would emit this:

To round up the list of compiler enhancements, the --profile=time option added in Elixir v1.10 now also includes the time to compile each individual file. For example, in the Plug project, one can now get:

To bring visibility to the compiler tracking improvements described in the previous section, we have also added new features to mix xref. mix xref is a task that describes cross-references between files in your projects. The mix xref graph subsection focuses on the dependency graph between them.

First we have made the existing --label flag to consider transitive dependencies. Using --sink FILE and --label compile can be a powerful combo to find out which files will change whenever the given FILE changes. For example, in the Hex.pm project, we get:

All the files at the root will recompile if lib/hexpm/accounts/user.ex changes. Their children describe the why. For example, the repository_controller.ex file will recompile if user changes because it has a compile time dependency on auth_helpers.ex, which depends on user.ex. This indirect compile time dependency is often the source of recompilations and Elixir v1.11 now makes it trivial to spot them, so they can be eventually addressed.

Another improvement to mix xref graph is the addition of --format cycles, which will print all cycles in your compilation dependency graph. A --min-cycle-size flag can be used if you want to discard short cycles.

Elixir v1.9 introduced a new configuration file, specific to releases, called config/releases.exs. A release is a self-contained artifact with the Erlang VM, Elixir and your application, ready to run in production.

The addition of config/releases.exs has been a very useful one but, unfortunately, it applies only to releases. Developers not using releases must use the config/config.exs file, which often loaded too early at compilation time. For any dynamic configuration, developers had to resort to third-party tools or workarounds to achieve the desired results.

Elixir v1.11 addresses this issue by introducing a new configuration file, called config/runtime.exs. This new configuration file is loaded exactly before your application starts, when the code is already fully compiled. It is loaded in development, test, and production, regardless if you are using Mix or releases. Therefore it provides a unified API for runtime configuration in Elixir.

If both files are available, releases will pick the now preferred config/runtime.exs instead of config/releases.exs.

To wrap it all up, Mix also includes a new task called mix app.config. This task loads all applications and configures them, without starting them. Whenever you write your own Mix tasks, you will typically want to invoke either mix app.start or mix app.config before running your own code. Which one is better depends if you want your applications running or only configured.

The Calendar module ships with a new Calendar.strftime/3 function, which provides datetime formatting based on the strftime format. The Date module got new functions for working with weeks and months, such as Date.beginning_of_month/1 and Date.end_of_week/2. Finally, all calendar types got conversion functions from and to gregorian timestamps, such as Date.from_gregorian_days/2 and NaiveDateTime.to_gregorian_seconds/1.

Since this is a release candidate, you likely won’t find it in your distros, so please check our install page for installation from version managers and from sources.

This release also adds new compiler warnings and it is likely that your dependencies will emit some of them. We have been fixing those over the last months in many deps, so remember to update your deps if compilation is too verbose. If some deps still have warnings, please consider sending them a pull request. Almost all new warnings can be fixed by 1LOC changes.

Since this is a release candidate, you likely won’t find it in your distros, so please check our install page for installation from version managers and from sources.

Hex’s Bob’s build availability (asdf) can be checked here: https://bobs-list.kobrakai.de/
It’ll show the RC once the build is available.

To bring visibility to the compiler tracking improvements described in the previous section, we have also added new features to mix xref .

mix xref graph also supports --source and --sink at the same time, which I found to be a great boon when trying to find out why certain files hold a dependency.

Since 1.11.0 is still in RC, hexdoc page for Compatibility and Deprecations does not have entries for 1.11. So check out the github page for now!

@josevalim I’m wondering if there is any policy or rules on how long an OTP version will be supported by Elixir, and there is any planned dropping old OTP version. Having that info may be useful to give some head up for maintainers in the elixir ecosystem… 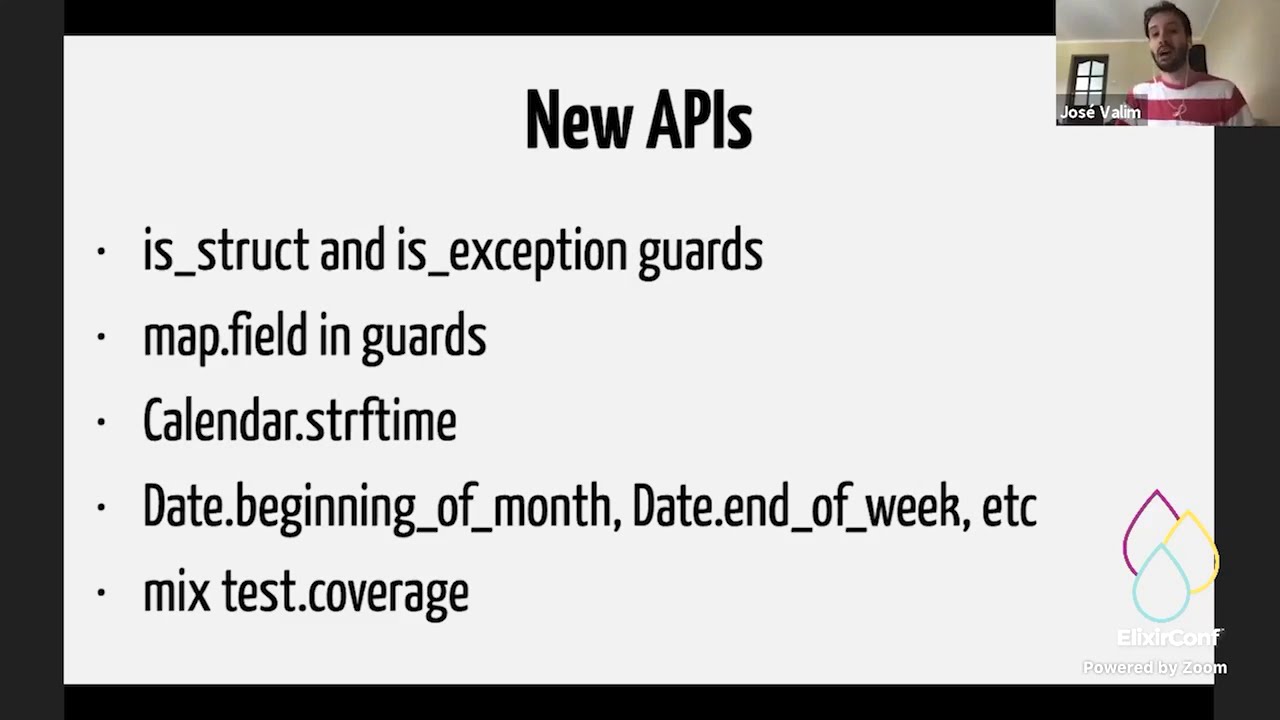 @josevalim I’m wondering if there is any policy or rules on how long an OTP version will be supported by Elixir, and there is any planned dropping old OTP version. Having that info may be useful to give some head up for maintainers in the elixir ecosystem…

And if you want to see the specific versions that are supported you can look at: https://hexdocs.pm/elixir/master/compatibility-and-deprecations.html#compatibility-between-elixir-and-erlang-otp

Thanks for another release and work on it.

I’m happy to see better dependency boundaries enforced - nowadays I always double check with the actual release if there’s some stray calls not defined through the dependencies, but this is much welcomed as in the beginning I have been surprised (after refactoring umbrellas or so) by it running fine locally through mix only to see it failing once released due to some modules now being in other apps that were not explicitly set as dependencies.

Strftime and the other calendar functions are very welcomed as well. (although nimblestrftime worked just fine I think it’s rare to not need some sort of date formatting and common date manipulations so I think they belong on the stdlib).

The new guards and dot syntax is going to be probably useful as well.

Well, the problem is what syntax should be used. Whether C-like strftime, Go-like “readable”, or any other. Should we keep “old, proven solutions” or rather go with “modern, readable solutions”? All of that is hard to tell from the day 1, and with stability guarantees, bad choice will be very troublesome. For such examples see locale handling in C which is one of the worst APIs ever.

I’ve installed the rc and erlang 23.0.3 both with ASDF (and therefore KERL under the covers for erlang but I don’t have erlang doc chunks.

What is the erlang compile option to ensure the doc chunks are included?

My current compile options are:

I don’t know about asdf, but for kerl you have to set KERL_BUILD_DOCS=yes.

Well, the problem is what syntax should be used. Whether C-like strftime , Go-like “readable”, or any other. Should we keep “old, proven solutions” or rather go with “modern, readable solutions”? All of that is hard to tell from the day 1, and with stability guarantees, bad choice will be very troublesome. For such examples see locale handling in C which is one of the worst APIs ever.

Yeah I hadn’t even thought about others as I mostly use strftime like formatting and I always thought it was ok. Layouts on Go don’t seem bad, but neither does Java yyyy-mm-dd notation. I don’t know.