Employee retention in the tech industry - is it a problem?

Apparently it is, for the ‘top 10’ tech companies: 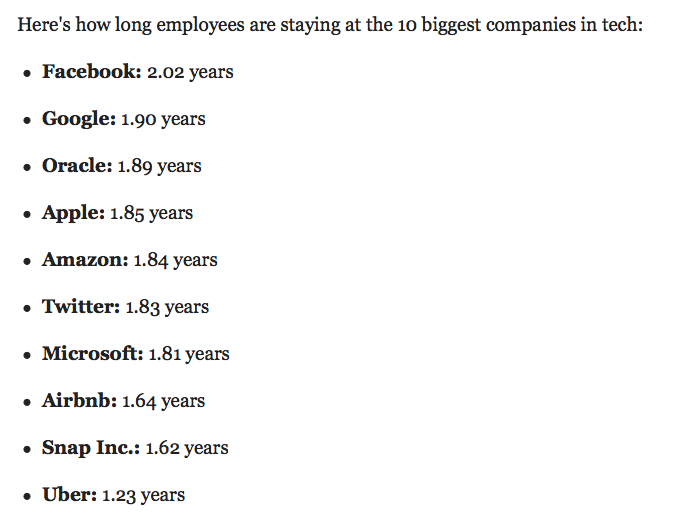 Travis Kalanick lasted in his role for 6.5 years — five times longer than the...

Facebook has the longest retention rate out of the top 10 tech companies, and even that's not very long.

Is it a problem where you work?
Why do you think these employees are leaving… for a better job, or because they are not happy? Or?

I think
Getting into these big companies makes that developer profile attractive for other opportunities.

Working in big corporation like Google your contributions are almost negligible people want to make a big impact that might be the reason.
P.S

I maybe wrong but this what I think might be the reason.

I can’t read that link without turning off my ad-blocker, but those
numbers don’t seem credible - I’d like to see the datasets they’re
based on.

As one example, Oracle has been in business since 1977, but the
average tenure there is 1.89 years? Sorry, I find that extremely
hard to believe…

I was surprised too. The data was published by Paysa: 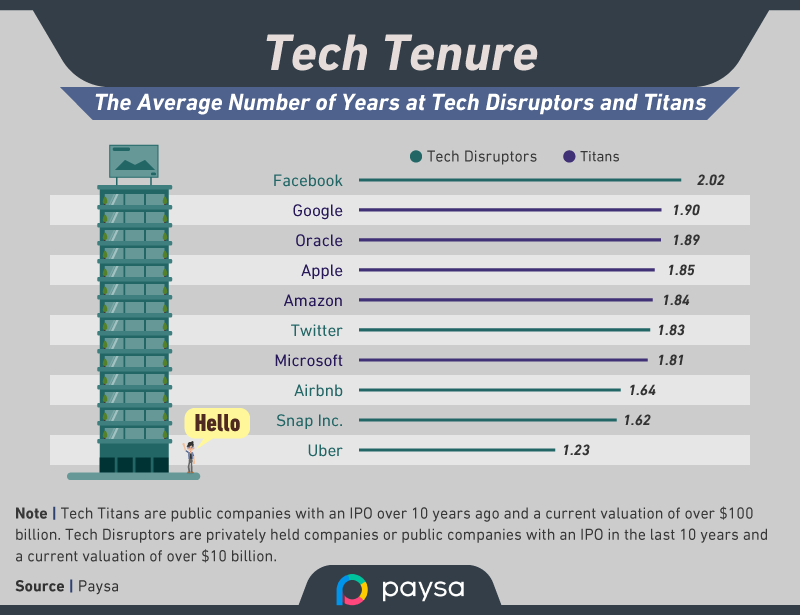 Why do you think these employees are leaving… for a better job, or because they are not happy? Or?

Well I work for a government segment. Retention here seems to be measured in decades. ^.^;
Not tech oriented area though, just my sliver, I make huge contributions, which I really really enjoy doing, which makes up for the very low pay more that I expected (I’d take a high morale place where I produce a lot of use but with small pay over a place where I’m just a tiny cog but have huge pay apparently).

It doesn’t say how they calculated it. My guess would be they looked for people with Facebook / Google etc. start and end dates on the CVs they have access to. So the dataset would only include people who had left as people who are still working there are much less likely to have their CV on a job site.

The numbers are very surprising, but a short google-proofing seems to confirm them

Slate’s Use of Your Data

Slate’s Use of Your Data

It’s no secret that the tech industry experiences faster turnover than almost any other industry, which is especially surprising given these generally are jobs with good pay, tons of benefits and lots of freedom.  Previous research has found... 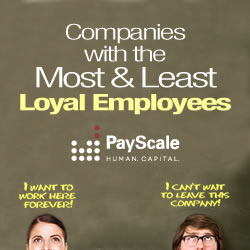 My wife works for a big tech company and their turnover is measured in decades, so it’s not all over the tech sector. The guys I work with also retain their employees for much longer then couple years.

The numbers might as well be very much misleading. I didn’t calculate the retention rate in my company, but I am certain it’s higher than this. However, it’ll still be very much lowered by the people who drop out early, and this happens. So I would think that better statistic would be to know the retention rate of employees who stay past 3 or past 6 months in a company.

If people drop out early, I’d consider this a good thing. There’s no match, better stop working together if you’re going to waste everyone’s and own time. Hiring won’t pick up everything, I’m afraid.

While dropping out early is not a big deal IMHO, losing employees who worked 6+ month is, since we already invested significant amount of effort and time in training. That’s why this stat would be more appropriate for me to look at

The numbers are very surprising, but a short google-proofing seems to
confirm them

Independent interpretations of differently-sourced bad data can
still be wrong

Only the deeptalent.com article discusses where the data came
from, and basing conclusions on trawled LinkedIn profiles seems
inherently skewed to me.

Aside from the issue of counting interns that it mentions, there are
no references anywhere to “acquihires” who bypass the standard
hiring process and may have substantially less interest in staying
with the big acquiring company.

FWIW, I work at one of those companies and I find the number listed for the company I work at completely believable. In fact it’s longer than I expected.

I don’t find anything surprising in those numbers at all. A new job every 2 years is very typical of a lot of resumes I’ve looked at over the years.

If those companies hire a lot of new grads, then it doesn’t surprise me at all. Just think about the numbers though. Say you have a company with two roles that need to be filled. One guy stays in his role for 6 years but the other has somebody new every year. You have one 6 year and six 1 years for your stats with only two jobs. That’s going to skew things on the lower end.

I find that all these tech companies have one peculiar thing in common… location.

The tech industry has a much larger footprint than the mega-tech companies located on the west coast. I’ve CTO-ed startups in the Midwest and I’ve never had employee retention issues. Most teams I’ve managed have been mostly virtual full-time W2’s and I’ve still never had retention issues. Even the ones I’ve hired on the west coast. I’ve even hired overseas people from TopTal and even still have never had retention issues. Other tech leaders I know in the Midwest don’t have employee retention issues either. Retaining good talent for 5+ years doesn’t seem to be an issue out here. If I see a resume for someone who’s only lasted at a company for >= 2 years it’s usually because the company didn’t last that long.

I think those numbers are more indicative of the reality distortion field covering the west coast hyper startup get rich quick culture. The tech industry is way bigger than these stats give it credit for.

Who cares? What difference does it make? Do you really want to work for these big asshat companies? Do these stats change your opinions of them?

When did retention in an ever-changing industry influence anyone’s opinion in said industry? To me, a company that can hold on to an employee for longer than 3 years is probably pampering them into obscurity.

Why do we still trust stagnation so much, even after we’ve seen every stagnant industry falter or flat out fail?

Not sure anyone other than managers care, but they rest of us probably find it interesting

What I find more interesting than anything else, is the culture; you’d think that if you landed a job at say, Apple or Google, you’d want to stay there for life (if I didn’t have my own plans, I can see myself committing like that - but then I am quite a loyal person

See, this may not be that easy as you say. Part of the problem is burn out syndrome, that kicks in sooner or later. If a developer works for 2 years on a project, that usually kicks in from my experience.

Being a software consultancy, we can actually do something about it and re-assign the developer who feels this way to a new project. I know that if I don’t they would leave. So I need to take a proactive approach here and make sure no one feels burned out / bored working on whatever they worked on for longer period of time.

I have no idea if Google/Apple/Facebook etc do that. The thing here is, the approach has to be proactive. You need to ask your employees how they feel about continuing working or if it’s time for a change. If you don’t they won’t complain - just leave.

you’d think that if you landed a job at say, Apple or Google, you’d want to stay there for life

I think you’re not accounting for “poaching” - employees working at these companies might as well have a bull’s eye on their back as far as recruiters go. From an old Steve Jobs video:

And I think what we need to do is support that team going through this very important stage as they work their butts off, they’re all getting calls being offered three times as much money to go do this …

Now there is bound to be some dramatic exaggeration but for the most part anybody being hired by these companies has managed to somehow navigate a fairly involved (and expensive) interviewing process before “the company” decides that “the candidate” is worth taking a risk on (and the training investment).

Therefore “other companies” see these “resources” as already “premium-select” and “highly desirable”. So rather than spending money on their own interviewing campaigns, they rather dump (possibly less) money into recruiter fees and new hire bonuses and salaries.

Add to that people freshly hired after finishing their post-secondary education would likely be much more tempted by these type of financial incentives because they are still at a point in life where financial gain is more important than the type of “vocational fulfillment” that requires that their contributions have a significant positive impact on the community they are (part of or) serving.

The way I see it these statistics are very misleading. They use the median, but in my opinion this sort of statistic should use the arithmetic mean.

Median makes much more sense to me. You want to know how many new engineers you’ll have to hire just to stay in the same place, never mind growth.

FWIW, there are built-in financial incentives for workers in Silicone Valley “giants” to switch jobs every 2-3 years. Much of your compensation is in stock incentives in the initial hiring grant. Those vest over time ( 3-4) years and without new grants, your salary effectively drops by massive percentages for every year you stay past your vesting.

I think these companies are well aware of this and actually aren’t all that concerned. They put a huge effort into engineering systems in which you can be productive much faster than in a typical company. You don’t need to spend 6 months learning the weird ins and outs of every organization. The google SRE book is essentially a handbook for releasing low experience developers into your infrastructure without setting it on fire.

you’d think that if you landed a job at say, Apple or Google, you’d want to stay there for life

Steve Yegge: Why I left Google to join Grab (after 13 years)