Ergo: a framework for creating microservices using technologies and design patterns of Erlang/OTP in Golang

Quite interesting article Google brought me. Didn’t find any mentions about it here.

What do you think in general? Would you use together with Elixir or even migrate to more performant language if it would offer similar to OTP features and reliability?

P.S. I don’t have any connection to this project or its authors, I saw it in yesterday’s article selection in Google app on my phone.

Technologies and design patterns of Erlang/OTP have been proven over the years. Now in Golang. Up to x5 times faster than original Erlang/OTP in terms of network messaging. The easiest way to create an OTP-designed application in Golang. 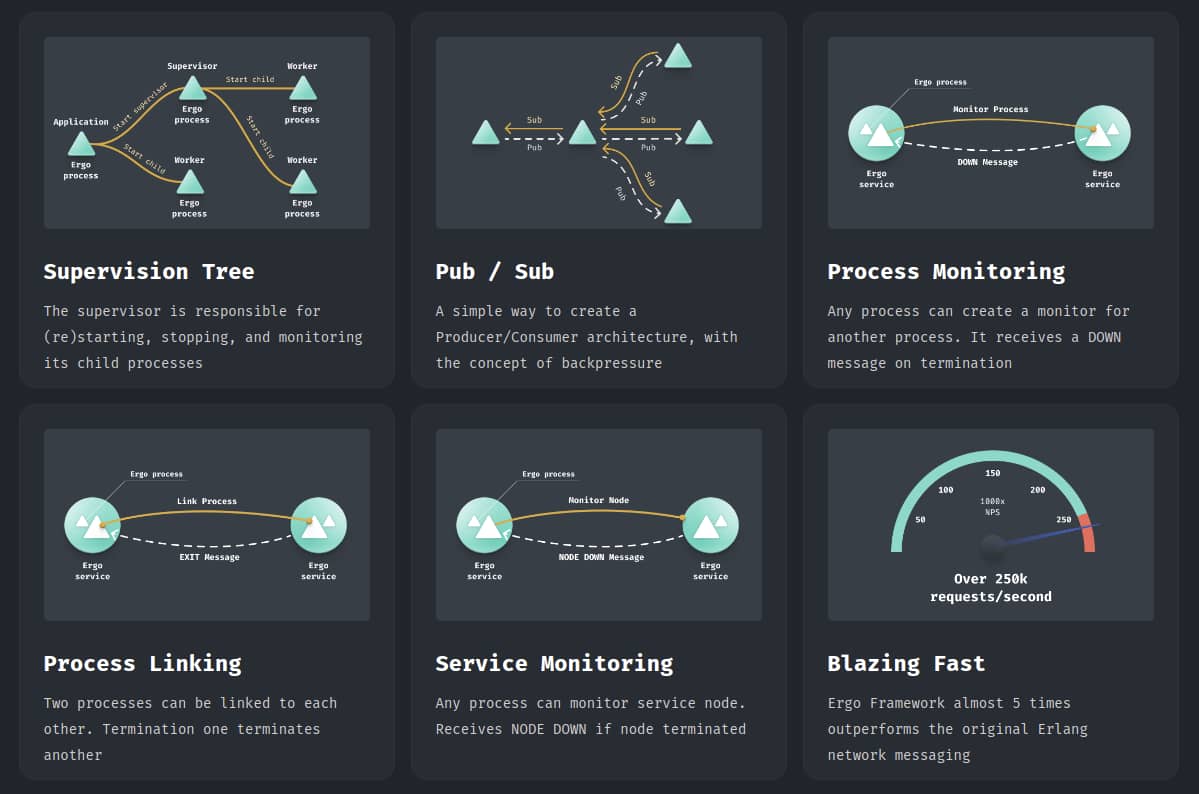 Amazing that OTP paradigm is winning new hearts and minds!
I think it also depends on the taste in programming language - which one lets you express your idea with more ease.
Elixir is also a functional language with features and design like patter matching, tail recursion and focus on simple data types (lists/tuples/maps). I personally would be missing these features if I switched to Golang.
Do I understand that ergo provides some sort of binary compatibility so you could have a cluster of elixir and golang nodes? That’s very cool.

Do I understand that ergo provides some sort of binary compatibility so you could have a cluster of elixir and golang nodes? That’s very cool.

Yes, from what I understood it does, I’m also quite excited about it.

From my own perspective I don’t think this project is able totally replace Beam VM, at least before golang gets immutability and total process (goroutines) isolation (it doesn’t do both, right? not quite sure about the last part, but it shouldn’t). But it would help to add “computation” nodes which can handle heavy calculations and the main part would do the rest.

Do I understand that ergo provides some sort of binary compatibility so you could have a cluster of elixir and golang nodes? That’s very cool.

Clustering is based on TCP and the erlang term format. OTP has support for C backed nodes in erlang clusters: Erlang -- Erl_Interface User's Guide

Thanks for the mention my project here

I’ve released the next version of Ergo Framework 2.1.0 with cool features (compression, proxy, etc…) . Full changelog is here GitHub - ergo-services/ergo: an actor based Framework for creating microservices using technologies and design patterns of Erlang/OTP in Golang

In a similar spirit of imitation being the sincerest form of flattery, I came across GitHub - lunatic-solutions/lunatic: Lunatic is an Erlang-inspired runtime for WebAssembly the other day. Both look interesting (and impressively ambitious). Joe Armstrong et al were clearly on to something.