See? Hacking through the night, working 56 hours without sleep, workoholism - not paramount for creating great products.

Yes - happy days. At the time I was working a 6 hour day due to the enlightened Swedish child care policies. Parents of young children are entitled to work 80% of full time - good for creativity and family life. Result 2 kids and a new programming language.

I was talking to @ joeerl a few weeks ago about the time they created Erlang and he mentioned that at that time, he was spending more time at home than ususal because he had small children this gave him time to reason hence creating such a beautiful language 1/2

Supervisor.start_child/2 <- now I see it

DHH is campaigning against this harmfull protestant / calvinist work ethics, will forward him the tweet.
Edit: I see you just did.

“And then I said anyone not willing to break their backs working for me was a tourist!”If you want to understand why so many startups become infected with unhealthy work habits, or outright workaho… 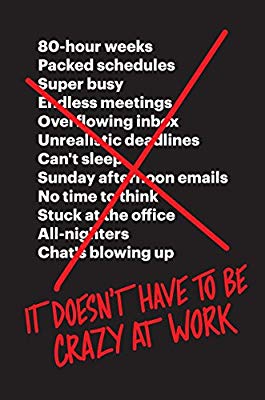 It Doesn't Have to Be Crazy at Work

This CEO thing is truly appalling.

I don’t understand why so many people still believe in this crunch time work ethic whatnot. Most programmers I know know that after 6 hours or so returns are diminishing and you need a break.

Building things is a marathon not a sprint. Fixing bugs takes way longer than tiredly writing them.

It is a view on men as cows whose milkproduction have to be maximized. Not productive enough? To the slaughter. We are not cows or machines. It is disputed whether cows should be treated more human. Allas people internalize this working morale, for reasons that can indicate the need for self reflection, maybe with professional help.

I remember reading about the work ethic of top scientists, and how a number felt they had about 4 hours of productivity a day, and you couldn’t force more out of them. One would work from 8 to 10, then 2 to 4, and that was it. I feel that’s my max, too. Then it’s off to the garden.

I think this touches on a bigger point, though. Why are there still 40 hour weeks? We are now in the dead center of the tech utopia, and instead of working 8 hours a week, we’re working more than ever, are more stressed than ever. We are more than a million times more productive and efficient than we were in 1990, the pre-cell phone, pre-networked world. Why aren’t we all sitting on beaches drinking mai-tais?

My belief is that each “advancement” in tech has only allowed us to grind up the ecological world that much faster. And now we’re screwed, as the ecological collapse is accelerating, and we’re fighting over smaller pieces of the “resource pie”. (I hate calling wild, living things “resources”.). Every additional cpu core, every language that takes advantage of that core to run more concurrently, is only accelerating our decline.

But it’s like trying to teach economists physics: you can’t have infinitely growing GDP on a finite planet. Thus debt always leads to utter collapse and ruin. It doesn’t register in their heads. And the same for tech engineers. They are too cut off from the ecological world to comprehend the disaster that is happening, and why their utopia hasn’t arrived.