[Erlang] Learn You Some Erlang for Great Good! (No Starch Press) (Free) 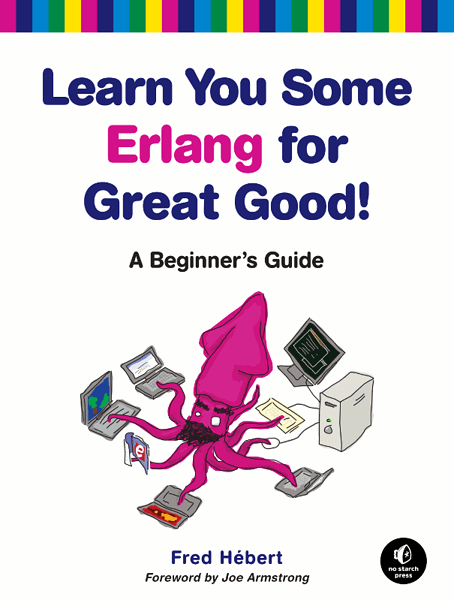 by by Fred Hebert

Erlang is the language of choice for programmers who want to write robust, concurrent applications, but its strange syntax and functional design can intimidate the uninitiated. Luckily, there’s a new weapon in the battle against Erlang-phobia: Learn You Some Erlang for Great Good!

Erlang maestro Fred Hébert starts slow and eases you into the basics: You’ll learn about Erlang’s unorthodox syntax, its data structures, its type system (or lack thereof!), and basic functional programming techniques. Once you’ve wrapped your head around the simple stuff, you’ll tackle the real meat-and-potatoes of the language: concurrency, distributed computing, hot code loading, and all the other dark magic that makes Erlang such a hot topic among today’s savvy developers.

As you dive into Erlang’s functional fantasy world, you’ll learn about:

Or read for free online: http://learnyousomeerlang.com

7 Likes
How have you been learning Elixir & Phoenix? (2017 Edition!)
Will Learning Erlang help in Learning ELixir and Phoenix?
Is anyone finding it difficult learning Elixir or Phoenix?
I am new, old, and I want to understand everything: Erlang or Elixir first?
rvirding June 16, 2017, 1:30am #2

This book covers a lot of ground. It is not just about the language itself but very much how to write functional and how to use the features of Erlang to build systems. Especially the latter makes it interesting for Elixir users as well.

And as I mentioned in other places I think the Erlang language is simpler then Elixir so I don’t think that understanding the code will be difficult.

This is certainly one of the best books for introducing Erlang. The ease of reading is one of the biggest advantages of this book and also it’s free on the website, which is awesome

Sometimes this is a good place to get it:

Learn You Some Erlang for Great Good!

Learn You Some Erlang for Great Good! is a hilariously illustrated guide to the concurrent functional programming language. As you laugh along with Hebert's brilliantly quirky drawings, you'll effo...