Frameworks vs libs + from scratch 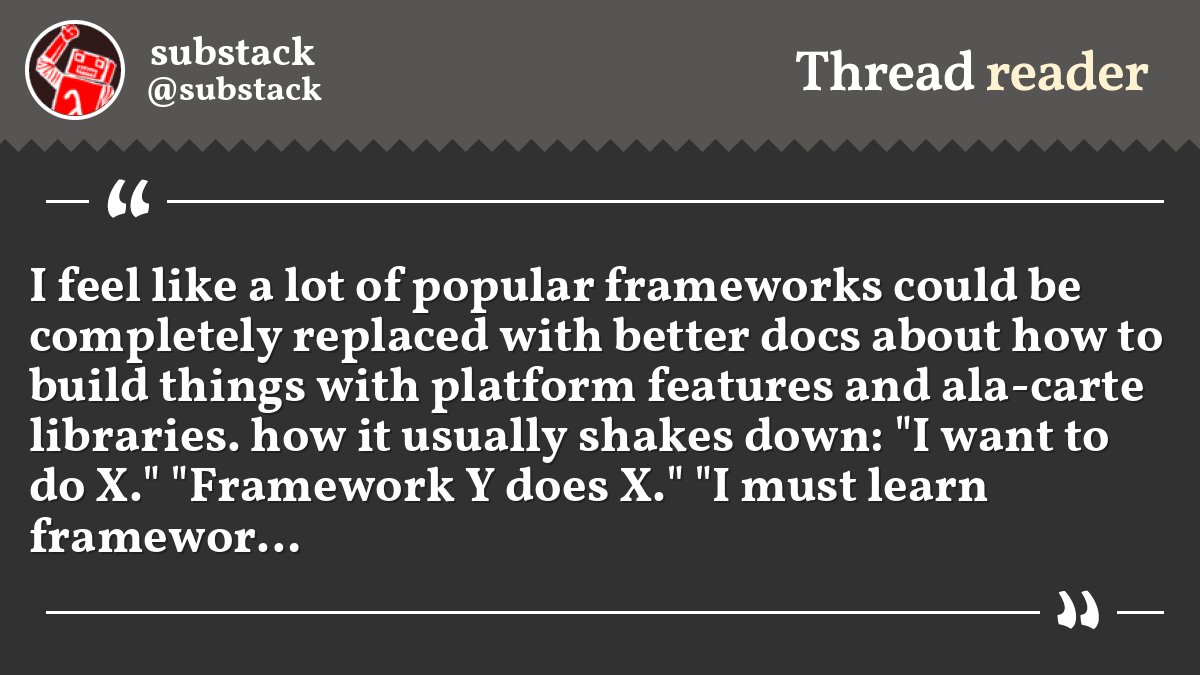 Thread by @substack: "I feel like a lot of popular frameworks could be...

Thread by @substack: "I feel like a lot of popular frameworks could be completely replaced with better docs about how to build things with plres and ala-carte libraries. how it usually shakes down: "I want to do X." "Framework Y does X." "I must lear...

It’s like that in C++ for sure. The Standard Library can do a rather amazing amount of generic things that most people don’t know about. Like the number of libraries that define something like fold_left or reduce when std::accumulate exists is just weird… o.O

Though admittedly C++ has some very odd naming conventions, like the above accumulate being reduce… But better docs would fix that! ^.^;

Or even the recent networking standard is astoundingly awesome! Or Filesystem!

“Simplicity is a great virtue but it requires hard work to achieve it and education to appreciate it. And to make matters worse: complexity sells better.”
https://www.goodreads.com/quotes/215637-simplicity-is-a-great-virtue-but-it-requires-hard-work

This makes me think about the last part of this quote I found recently.

The quote comes from https://www.cs.utexas.edu/users/EWD/transcriptions/EWD08xx/EWD896.html, you can find lots of good reads in the EWD archive.

Maybe the framework in the future should be build to be flexible enough (framework from scratch libs) to change their parts to fit our assumption but it seem hard. I think we should categorize framework first into categories maybe better (one for E-Commercial, one for CMS…); also internal parts should be replaced easily by other libs.

The one distinction between a framework and a library, is the direction of control: Your code calls a library, whereas your code is called by a framework. This inherently means that frameworks are a lot more difficult (if at all possible) to combine; they are not proverbial lego blocks.

So, unless there really is no way around having a feature provided in a way that can only really be exposed by using a framework, it makes a lot more sense to use libraries.