Has anyone upgraded to MacOS Mojave? Did it break anything in your dev environment?

It’s only been out a few days, but interested in hearing how everyone else has got on and whether anything development-wise broke

No issues here. Erlang installed with kerl, elixir with kiex, and postgres via brew

Did you do a clean install then Chris? I was hoping I wouldn’t have to change/reinstall anything if I just do an upgrade

No issues etheir since early beta builds.
I use asdf to manage elixir/erlang.

Nope, just regular upgrade thru the App Store. I think I was all set in 30min.

I upgraded last night and it seems to have gone ok - apart from nuking my databases etc so by the look of it I will have to go through the process similar to a clean install.

The first thing I noticed tho is how washed out everything looked (Apple clearly want everyone on ‘glossy’ screens) so had to recalibrate the display (this can be done via preferences > display, then hold down alt and click on calibrate - chances are you will only need to alter the boxes on the left).

Not really a fan of dark mode - it works well for video/photography, but for most other things it just isn’t suitable imo (iMessages and Safari a good example).

I use KDE on linux and I use both multiple desktops and multiple activities, is it like one or both of those or something entirely new?

I haven’t used KDE (or any desktop linux) but I guess your ‘multiple desktops’ is the equivalent of our ‘spaces’ - which I use extensively and often in fullscreen mode or split. We can do things like use 4 fingers to scroll left/right between them, use hot corners to show all etc

Desktop stacks is basically where anything on your desktop is stacked into a group, and you click to expand (so all images in one stack, all PDFs in another, etc)

I haven’t used KDE (or any desktop linux) but I guess your ‘multiple desktops’ is the equivalent of our ‘spaces’ - which I use extensively and often in fullscreen mode or split. We can do things like use 4 fingers to scroll left/right between them, use hot corners to show all etc

Ah, multiple desktops isn’t really a KDE feature, it’s more of a generic ‘Linux Desktop’ feature, almost every WM supports it and has supported it since the 1990’s.

Desktop stacks is basically where anything on your desktop is stacked into a group, and you click to expand (so all images in one stack, all PDFs in another, etc)

Sounds similar to KDE Tabbed Windows. If you use a theme that supports it (not the default Breeze, but like Oxygen or so) then you can put any windows together into their own tabbed windows, like chrome but each tab is a different program, and you can mix and match all you want. This is especially fun considering you can drag any KDE widget (everything is a widget in KDE) into any program’s chrome (or the middle of the program anywhere if they use the right Qt interfaces) so you can get little self-contained things.

Activities are entirely different. The ‘usual’ example of activities is having, say, a Work, Home, and Gaming activities. Each of which have their own multiple desktops (and each desktop can have their own set of tabbed windows, or windows can span multiple desktops, or you can have multiple desktops be on, say, a big rotating 3D cube or something with a 3D scene in the center of it). Each activity can have entirely different desktop Widget layout (so the taskbar can be different on each, can get a Mac-OSX style launcher if you want, etc… etc… etc…), different icons, different favorate programs, etc… They are to help you get into the right mindspace, like just kind theme your Work activity green, Home activity as blue, and Gaming activity as red or something, with their own widget layouts and all. Each ‘activity’ is not just different themes or desktop backgrounds or so, you can change a lot of things, even some system settings like your power settings, the language, etc… etc… etc… It is hugely integrated. And swapping between is as easy as a click on your activity widget where-ever you put it (default on the taskbar at the left to the right of the menu button), or hitting Super+Tab (instead of Alt+Tab for switching programs, Super+Tab by default switches activities).

I think Gnome has something called ‘activities’ as well that is entirely different, it’s more like what you described in Mac with just ‘stacks’ of the windows of a program that you can collapse together or something, had it for a few years as I recall?

I think @AstonJ means the part in the video where the guy has a ton of stuff on his desktop (like old people / savages) and you can turn on this mode where it automatically organizes them all by type, last access date, creation date, etc… into neat folders for you. You can then turn it off and get your mess again.

I think @AstonJ means the part in the video where the guy has a ton of stuff on his desktop (like old people / savages) and you can turn on this mode where it automatically organizes them all by type, last access date, creation date, etc… into neat folders for you. You can then turn it off and get your mess again.

Ah I’ve yet to see the video, often can’t watch them during the week (I SO prefer nice readable webpages instead). ^.^;

Why would it use creation date to organize program windows, or is that based on when the window was last opened?

EDIT: Oh wait, are you talking about desktop icons? Does Mac OSX still have those?! I’ve not seen a desktop icon in years! I open everything via hotkeys, like Alt+F1/F2 to open various quick launch/action menu’s respectively and type a couple of characters to open what I want, all without even touching my mouse. Programs, files, a quick in-line calculator or google result, anything, easily pluggable… o.O
Why would you even want something touching your desktop icons, even back 15 years ago when I did use desktop icons I wouldn’t want anything to touch them (which is one reason I turned them off in Windows XP, any time the screen resized, like for a game, they’d all be shuffled around) or I wouldn’t be able to instinctually know and launch where it is supposed to be, instead I’d open the wrong thing or I’d have to slowly scan the desktop visually to find it or click in an empty place and start typing it’s name to jump to it (and only it)…

I’ve not seen a desktop icon in years !

You and me both, I jump straight into xmonad so I don’t even have a desktop to have icons on. A good fuzzy finder will allow you to launch any program within a few keystrokes anyway, as you said, so I haven’t really seen the point in a while.

To be fair, the guy in the video seems to be dealing with video and stuff a lot so he’s likely not the same demographic (or is that only age + race?) as us.

I have upgraded Sierra and it works fine on my machine. Good luck! 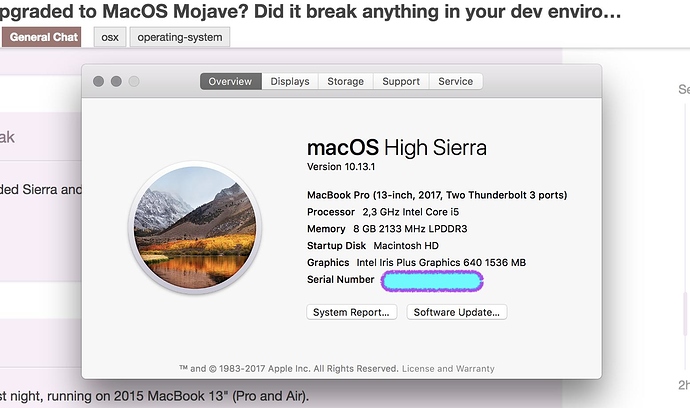 Back when Steve Jobs was alive, every time a new iPhone or mac OS was announced, they got tons of interesting new features. I still remember Steve announced like 8 to 10 of these. And they were fancy as well. So many ‘ooohhh’ and ‘wow’ moments.

Wrecked my environments. I wiped and reinstalled everything

I wiped and installed clean. All of my development tools worked, but my mid-2013 Macbook-Pro 13" will not go to sleep when closing the lid (light stays on). If you put to sleep by the Apple menu, it either will crash when waking up, or if it does wake up, it’s still unlocked like it never went to sleep. Apparently many others having sleep issues. Went back to High Sierra until they fix it. (PRAM reset and all of the other steps Apple suggests do nothing).

I recommend you test that your machine actually will sleep and wake normally. Some have reported that the backlight goes out but the machine does not actually sleep. Take it out of your bag and it’s hot and low battery.

Others have no problem at all.

FYI I upgraded to Mojave 10.14.1 which just came out on Oct-28 and the issues with sleep/hibernate/wake and not asking for password on wake are gone. Everything else with the dev environment seems to be working just fine.