Hey there! There’s a new kid on the block!

Full stack isomorphic Elixir web framework that can be used on top of Phoenix. 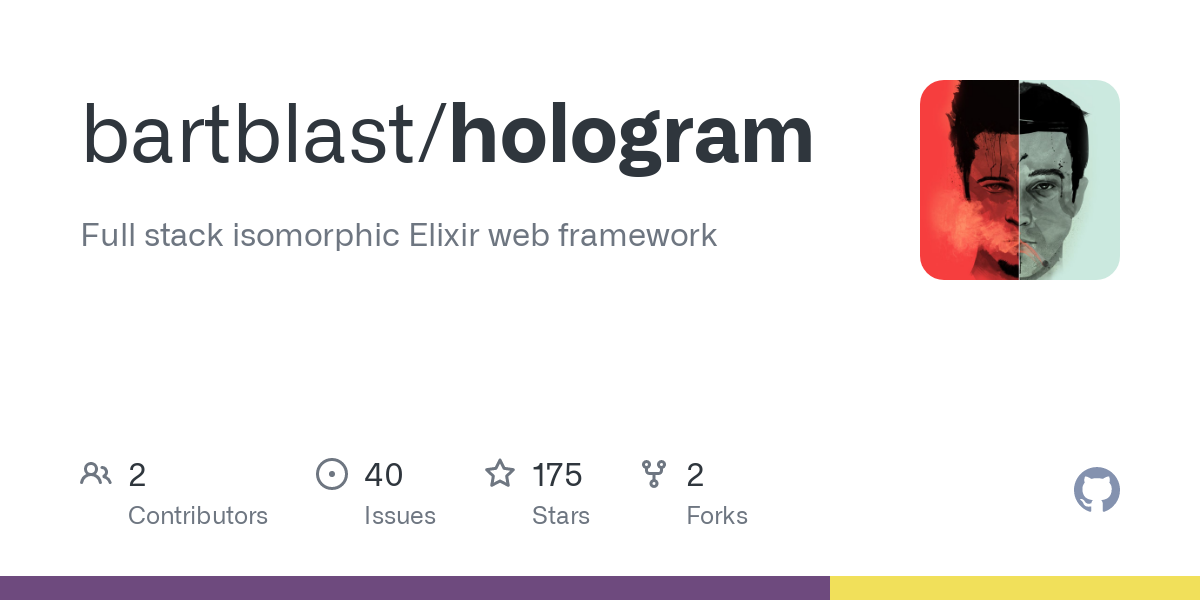 Contribute to segmetric/hologram development by creating an account on GitHub.

To build your web app, you use basic Hologram blocks: pages, layouts and components.

Hologram builds a call graph of your code (which must follow some basic conventions) and determines which code is used on the client, and it then transpiles such code to JavaScript.

Because the state is kept on the client it makes the programming model simpler, and thanks to stateless or stateful components the app is easily scalable.

Client communicates with server through websockets - there is no boilerplate code to make it work, Hologram figures this out automatically.

What is already done

This is work in progress (although usable and used in production). To check what works and what is planned - take a look at the roadmap in the readme: GitHub - segmetric/hologram

I tried to write this kind of framework first in Ruby, and I actually managed to create a working prototype, but the performance was not satisfactory. Then I tried Crystal, but it was very hard to work with its AST. Then I moved to Kotlin, but I realised that it’s better to use a dynamically typed language for that… Then I found Elixir in 2018 and fell in love with it. I started to work on Hologram in the summer of 2020.

Is it used in production?

Yes, it is used in Segmetric: https://www.segmetric.com/ Take a look at the “join beta” and “contact pages" which showcase form handling, or check the mobile menu. This all works on transpiled Elixir code! (But please, submit the forms only if you actually want to join the Segmetric beta or contact Segmetric - it is a live page, thanks!)

I want to see some code!

To see how Hologram app is structured, and see some actual code, take a look at the Hologram’s E2E modules: hologram/e2e at master · segmetric/hologram · GitHub

I’m in the process of creating a basic website with installation guide. Let me know what you think about the project? What do you need to try it out? I will be glad to answer your questions

Interesting! What are you using to transpile Elixir, elixirscript?

Wow, this is really cool! Would love to see a “real” project with this to get an idea of how to structure things.

@christhekeele I initially tried to use ElixirScript, but I couldn’t make it work. When I went through its GitHub issues I realized the creator stopped maintaining the project and focused all of his efforts on Lumen: Still alive? · Issue #495 · elixirscript/elixirscript · GitHub So I tried Lumen, but too much work was in progress. And now it looks that the project is stalled at the moment: Project Status · Issue #698 · lumen/lumen · GitHub

I also tried another route: Erlang → PureScript → JavaScript through Erlscripten, Erlscripten – Transpiling Erlang to Javascript. Yes, you read it right - News and Announcements - æforum but I wasn’t convinced with it, because one of my goals was easy debugging of the transpiled code, and for that it helps if the transpiled code resembles what was actually written in Elixir.

So I decided to write my own transpiler, because that gives me much more control over the output code and I can fix any errors myself. I do this by first converting the code to AST, then building IR (intermediate representation) containing context and metadata, which makes it easier to reason about the code and finally the IR is encoded into JavaScript. You can take a glance at its structure here: hologram/lib/hologram/compiler at master · segmetric/hologram · GitHub

I’m building a website that will have a basic getting started guide with installation instructions. I’ve been also thinking about creating a basic demo project. Do you have any ideas for that?

Very cool. Can the pre-transpiled code run in elixir for testing purpose? One of the pain point of LV is that it is hard to do testing the cover the client side functionalities too.

@derek-zhou If I understand correctly what you mean, then yes, it should be possible.
You could theoretically run the whole event loop in Elixir, e.g. some action triggers some command, which then triggers some other action, and the new state is used to rerender - all of this can be executed inside tests. You can also simulate some browser use without E2E tests, by triggering events directly (without the DOM) through tests. Is that what you meant?

Also when I was investigating this, it was pointed out to me that any such work done at compile-time will not apply to “pages” added at runtime, e.g. by a hot code reload, unless you explicitly write some hooks to do that. Just some food for thought.

Any plans to split out the transpiler into a separate library?

Yes. Being able to run regression tests without needing a javascript counterpart or a fake browser is huge.

I am looking forward for a detailed write up of how to do this. Keep up with the good work!

Maybe a simple forum could be interesting - has registration/login, storing and retrieving from database, and maybe even roles and permissions.

Congrats, this looks very promising. What will be Hologram’s main selling points over a standard liveview app? developer productivity, ergonomics, simplicity, other…?

@Un3qual Hey, thanks - good suggestion! I initially considered to use handle_call/handle_cast but later switched to handle_action/handle_command and finally to action/command.

My reasoning is as follows:

I’m happy to reconsider that in some time though, based on user feedback

The way I solved that was by assembling a custom router dynamically in runtime during the app startup - once all page modules are compiled and Hologram can determine what routes are needed. It can be redefined dynamically as well (in case code reloading is needed).

Any plans to split out the transpiler into a separate library?

@stevensonmt Yeah, I’ve got this at the back of my mind from the beginning. To do that I want to first support most of the Elixir syntax, and then some refactor would be needed, because it got coupled to the framework a little too much (but nothing that can’t be refactored).

Congrats, this looks very promising. What will be Hologram’s main selling points over a standard liveview app? developer productivity, ergonomics, simplicity, other…?

@Twfo326 Thanks! Here are the main selling points:

Another important selling point is the dev experience. I envision Hologram to be very friendly to new Elixir converts or beginner devs. I want it to be very, very intuitive, so that you can focus on working on new features in your project instead of solving technical problems and writing boilerplate code.
To achieve that Hologram will provide out of the box such things as UI component library (CSS framework agnostic), authentication, authorization, easy debugging (with time travel), caching, localization and some other features that you typically use in a web app.

I think that using Hologram’s approach, i.e. Elixir-JS transpilation, code on client and action/command architecture it’s possible to create something as productive as Rails, but without its shortcomings related to scalability, efficiency, etc.

Really promising … many thanks!

Where would you like to discuss feedback without raising a github issue?

eg package {:hologram, “~> 0.1.0”} appears to be missing lib/mix/tasks/compile.hologram.ex,
or am I misunderstanding how the package should be used standalone from hologram/e2e?

What do you suggest to use for feedback - this forum, GitHub issues, anything else?

Good catch - version 0.1.0 is missing lib/mix folder, but if you use the version from git master branch:
{:hologram, git: "https://github.com/bartblast/hologram.git"}
it should be included.

There are a few steps that need to be done to integrate Hologram into a standalone project, I will write detailed instructions for that very soon (it’s not that complicated, but I need to verify a few things first). I haven’t had much time recently, because I’ve been focusing on job interviews.

@bartblast @christhekeele I stopped working on elixirscript mostly because it seemed like it wasn’t providing the value to the community I hoped it would. And bringing the BEAM to the browser is a big task in itself. But sounds like there is some interest in that sort of thing. I’d be interested in helping with an effort for having elixir compile to js. Nx and Gleam’s JS compiler makes me think going in a similar direction would be a good start since you don’t have to solve the BEAM in the browser so much.