How have you been learning Elixir & Phoenix? (2017 Edition!)

I’m currently implementing C node (client) following the Erlang docs so I can run some opencv related processing, there isn’t much material and the fact I’m doing this on Windows makes that worse. But I just got the bare minimum to work today! Learned a few things and probably will write a blog post about this. The best learning experience comes from doing!

A friend at work snuck some Elixir into our codebase and eventually showed me, and I immediately liked it. That was about 2 months ago, and since then I worked through “Take Off With Elixir”, most of the Elixir School and am about halfway through “Programming Phoenix”, although there are a couple of errors or outdated bits in it. At work I have a Safari books subscription and used it to read the first chapter or so of the Little OTP Book which seems really nice.

Although I don’t feel like I understand enough Phoenix to be useful, it seems like about the right time to jump in and try to make something, which will result in a huge mess and then I’ll figure it out.

Sorry it was SNMP… I just wrote in a rush may be.

I read Part I of Programming Elixir 1.2, of which I probably learned 15% of the material. I then bought the video packs on learnelixir.tv and learnphoenix.tv, both of which helped out enormously (hopefully they will be updated for new versions in the future). Recently, I signed up for Dave Thomas’s Elixir for Programmers course, which is also helping a lot.

I couldn’t agree with this more. I’m hoping to dive in soon, with everything I have learned, and build an application that I have been thinking about.

Sorry it was SNMP… I just wrote in a rush may be.

Ah thank goodness no I have not. ^.^;
Should be quite doable though.

I’m currently studying elixir and Phoenix, i’m going to use it for my final school thesis.
But it is hard to find updated tutorial or free books for phoenix 1.3 at the moment. Almost all resources i found is paid books or courses which is i can’t afford or too much. Haha…

Have a look at these @saint011

[image] https://joyofelixir.com by Ryan Bigg Joy of Elixir came about because I saw that there was not very much when it comes to absolute beginner material for learning Elixir. There's the excellent Getting Started guide on elixir-lang.org and the Programming Elixir book, but those feel like they're more targeted towards experienced programmers. They teach Elixir with a lot of assumed knowledge about programming languages. They're great books, but they're only great books for experienced …

Classing this as a free online book

Then there’s the Elixir Guides and Phoenix Guides

On the Erlang side, there’s:

[Erlang] Learn You Some Erlang for Great Good! (No Starch Press) (Free) Books

[image] by by Fred Hebert Erlang is the language of choice for programmers who want to write robust, concurrent applications, but its strange syntax and functional design can intimidate the uninitiated. Luckily, there’s a new weapon in the battle against Erlang-phobia: Learn You Some Erlang for Great Good! Erlang maestro Fred Hébert starts slow and eases you into the basics: You’ll learn about Erlang’s unorthodox syntax, its data structures, its type system (or lack thereof!), and basic f…

[image] by Fred Hebert This book intends to be a little guide about how to be the Erlang medic in a time of war. It is first and foremost a collection of tips and tricks to help understand where failures come from, and a dictionary of different code snippets and practices that helped developers debug production systems that were built in Erlang. ###About the Author Fred Hebert is the author of Learn You Some Erlang for Great Good!, a free online (also paid for, on paper) book designed to …

https://github.com/happi/theBeamBook A short and personal history of the book I, Erik Stenman (Happi), started writing this book back in 2013. At first I was thinking of self publishing the book on my blog, but since English isn’t my native language I felt I needed help by a good editor. I managed to get a deal with O’Reilly and started converting my outline to their build process. My original plan was for a very long and thorough book, which the editor felt would get few readers. I starte…

That should keep you busy for a while

Thank you so much

Just open up and editor and code :p. The hardest part of transitioning from an object oriented language was writing code that mutates to code that transforms. But Programming Elixir was the book that turned the wheel

Been designing and building as many apps that rely on a solid amount of OTP as possible. Running on otp app seemed pretty important and the language gets easier really fast naturally when programming a variety of things. Sure enough it took practice and iterations to get used to design with supervision trees but feels amazing when it all clicks

Do you think the Elixir in Action book is relevant enough at this time? Because I saw that Sasa is going over a rework of the book atm.

As mentionned by the author in a prevous post, the second edition is now available as MEAP. 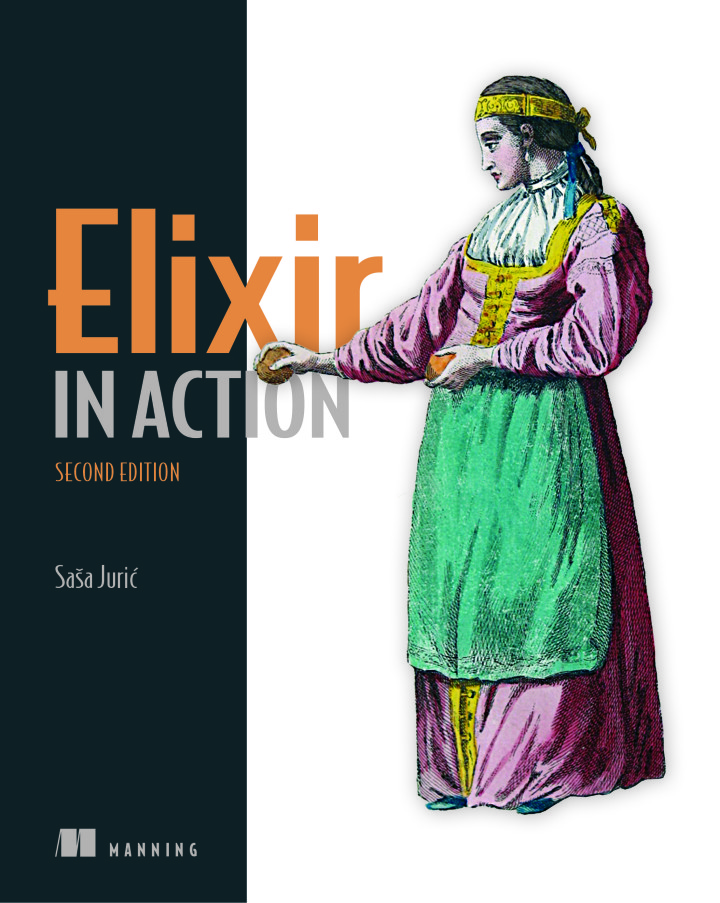 A gentle, lucid, and compelling guide to Elixir; loaded with practical advice.

Yep, as Koko has said the second edition is available now - even if it wasn’t I would still highly recommend it

check out my review of it here

Do you think the Elixir in Action book is relevant enough at this time?

Why learn Elixir? How do I get started? How do I learn Phoenix? What’s the Erlang VM?

This is what I’ve done to ramp up with Elixir in the past 2 weeks. I hope these resources help you too!

Official Docs + ElixirSchool and now Phoenix inside out by @shankardevy.