How to install Evision(elixir) opencv for vs code

But how to install it and and how to get started with it i dont know.

and where i can get some material about the syantx and the features of Evision with elixir.

can anyone tell me the whole process?

Did you try the installation instructions?

But how to install it and and how to get started with it i dont know.

Well, what did You try?

There seems to be a lot of people wanting to use eVision… all with the same question.

I went through this installation and did the first two steps
which are : $ mix new my_app
and : Then you can add evision as dependency in your mix.exs.

so after doing this i got this : 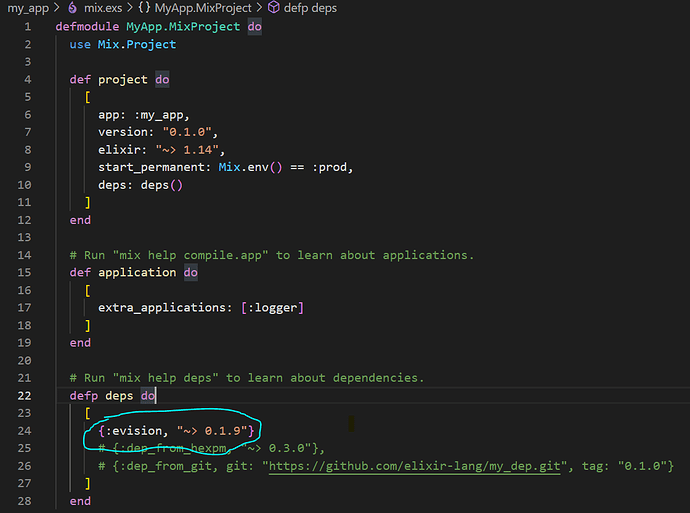 You need to get the dependencies. See this section of the getting started guide: External Dependencies. Make sure you run this from the same directory that contains the mix.exs file.

Did you go through the official Mix tutorial?

Very interesting idea. However, if it is a prized and timed limited competition, then shouldn’t all external help considered cheating? Imagine someone at the chess tournament and bring out their phone to consult an engine …

actually after going through the link i was only able to understand some part most of the part was going over head,

but I again tried to understand it but but didnt getting it.
what i did isn’t enough or I have to do somthing more complicated things?

Running normal scripts of elixir on vs code is easy but
what i just need is to install Evision library and use it in a script.

There is a huge cheating scandal in chess at the moment

During the Sinquefield Cup in September 2022, a controversy arose between chess grandmasters Magnus Carlsen, the current world champion, and Hans Niemann. Carlsen, after surprisingly losing in their matchup, dropped out of the tournament. Many interpreted his withdrawal as an insinuation of an accusation that Niemann cheated. In their next tournament meetup, Carlsen abruptly resigned after one move, perplexing observers again. It became the most serious scandal about cheating allegations for i...

I know, it is part of the reason I brought it up. It is one thing to help people with their work related problem; although there is money involved, at least no one is being disadvantaged. However, if this is a competition, and there are honest people spending time learning all the stuff from publicly available resource, yet someone asked the person who knows and gain an advantage, that is not fair.

I went through some installation process provided by our mentor and i think i have done my installation.

but problem is they showed us how to use it in : iex -S mix
not how to run it in a script.

So I run the command : mix help
and Got this

Here what is the diffrence between normal iex and this iex -S mix
i have shared a video link provided by our mentor regarding this : Link of video

That’s not it. mix has a dedicated command to fetch all dependencies you have in the mix.exs file. Use that.

How to use Evision.divide(scale,scr2) ? I am trying to pass a grayscale image and setting the scale at 255 but its giving segmentation fault!

I moved the post to the existing request for e-yantra homework.

You might have more chance to get an answer if You provide the steps You have already done.