`inputs_for(... prepend: ...)` doesn't process the prepended value in this case. I think

A call to inputs_for that uses :prepend seems to skip the prepended value when the containing form has errors (that is: was created from a changeset with errors). Is this a bug?

Here’s what a form looks like for an animal with no “service gaps”: 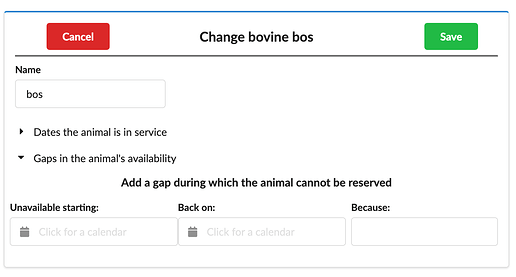 This form represents an animal that has_many service gaps. In this case, it has none.

The code that produced the form’s HTML looks like this:

All is OK in this case.

Now suppose I submit the form with an error in one of the animal fields. In this case, I try to rename it to an already-existing name. The resulting changeset gets fed to form_for and the form looks like this:

In this case, the function argument to inputs_for is not called for the :prepend value. Since there are no actual service gaps, the function is never called. That means:

In the case where the animal already has service gaps, the non-prepend values for inputs_for are still processed. For example, here’s the initial form for an animal with a single service gap:

The same mistake (picking a new name the same as an existing name) produces this form:

(The “Add a gap” heading is wrong because the code assumes the first set of fields will be for the prepended empty Animal. But it’s not, because the empty Animal got skipped.)

So: it seems that, in the presence of an error in the top-level Form structure, inputs_for ignores specifically the prepended value used to create a new “assoc” value. But it processes other values.

There is an error somewhere in at least one of the form values.

The inputs_for behavior supports the latter two cases. It’s awkward for the first one because an empty form vanishes because of a mistake made someone else. I think this case just has to be handled specially.

I’m inclined not to use prepend and instead put the logic of when an empty form should appear down around the changeset. It’s business logic, of a sort, I guess.