Is there an Elixir editor for iPad or one I can install on my server and use in browser?

I’ll be traveling for a week and I won’t be taking my laptop with me.
While there is 80% chance I won’t need to code at all during this time, there is a slight chance that I might need to.

So, is there an editor that is able to edit Elixir files (with code highlighting preferably) over SSH - mostly for reading but also maybe for some slight coding? Even better would be one which is a web app installed on my Web server.

over ssh? maybe use vim on the server side?

I use spacemacs and ssh via my ipad using Prompt. It’s a bit laggy, but it’s useable.

I can use another editor and adapt to its shortcuts, but I don’t think I’ll be able to use emacs without my key re-maps. I swap right cmd/alt for a right control.
So far I don’t seem to be able to find a way to remap iPad Smart Keyboard keys. If some SSH client supports that, I’d be pleased to know.

I use the vim key bindings in spacemacs. For esc, it’s f Then d In quick succession.

And there’s no way to remap the keys unfortunately.

I’m not sure if it works on an iPad but I believe cloud9 ide supports ssh workspaces on the paid for plan and they have elixir support.

I believe there are SSH clients that you can install on iOS, which you could use to log in into a VPS that has e.g. spacemacs installed. The terminal-based version does not look as slick as the GUI version as it is slightly more limited in its colors, but it is fully functional. I’d highly recommend using an external keyboard as it makes typing a lot easier.

I work on code remotely using my phone all the time. I use connectbot for SSH from my phone to my home computer. I use Spacemacs (previously vim) in the terminal. I use a chromcast to cast it to the hotel tv if available. And I use this little cheap Logitech bluetooth keyboard to type on otherwise I use a stylus with Hackers Keyboard on my phone to do the programming in as it is designed for programmers and has all the useful keys (I have a Nexus 6, which is a pretty big phone).

I also occasionally use bVNC on my phone to connect over SSH to spool up a VNC server to my X session (it can do it all in one step) to get visual access if I so need, which is also fantastic to cast to a chromcast.

Yeah, after trying things for a day, seems like something like this is the only reasonable way for doing it in the present day.

Uhh, that does not look really safe… o.O
As long a a good authentication is in front of it. ^.^;
It’s not an IDE though too, but cool link. 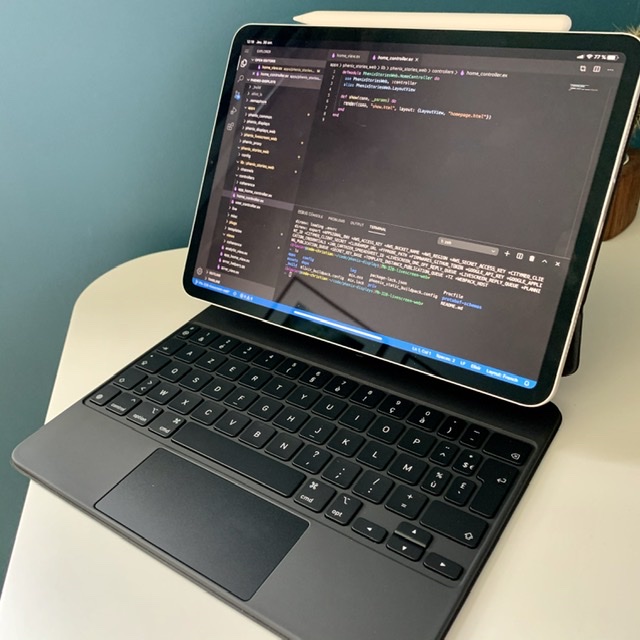