Is there an Elixir Slack or Chat?

I’m learning Elixir and Phoenix on Udemy (sorry for the advertising), and in the Ruby community we have an Slack chat called “ParisRb”.

There is the same thing in Elixir/Phoenix ? Best : in french

There is an Elixir Slack, but fullfrick Slack sucks…

No clue if it has a French section?

They all need to move to Discord though, or IRC, or both via a bridge… >.>

We have all of them as listed on elixir-lang.org: 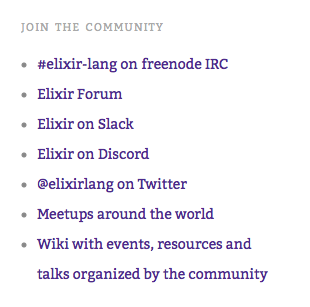 Aww, freenode, one of the only servers I’m not always connected to. ^.^;

Has the community picked a preference between Slack and Discord? I prefer Discord myself because I am a gamer, but additionally, they are a language showcase for Elixir. Big props.

However, this does not matter if most of the influential supporters of Elixir are using the Slack channel.

I know I can use both, but these apps use a lot of memory resources. Rather go with the flow.

Just use the forum

Seriously tho, every conversation that takes place on the forum can potentially help hundreds if not thousands of people further down the line. It’s why people are saying things like…

I do. I agree. But, instant and interactive communication is a benefit as well.

Has the community picked a preference between Slack and Discord?

Well, there is an official and public slack linked from official website, but no discord. So its obvious isn’t it?

Personally I do not like either and prefer IRC.

Well, there is an official and public slack linked from official website, but no discord.

There is a link to the Discord channel on the sidebar on the official website.

For those that prefer Matrix, we also have a Matrix channel but it’s currently unofficial (run by me).

Oh, I haven’t seen it previously, but I seldomly do open elixir-lang.org

Perhaps the last time I looked was even before the discord existed? I don’t know

Well, there is an official and public slack

The only official chat room is the IRC channel

I do consider them all as official platforms, since all are linked from the official languages homepage and they are not marked as inofficial or community driven in any way.