I forked the Plug.Static plug and modified it to leverage persistent_term and the initial results looked good. 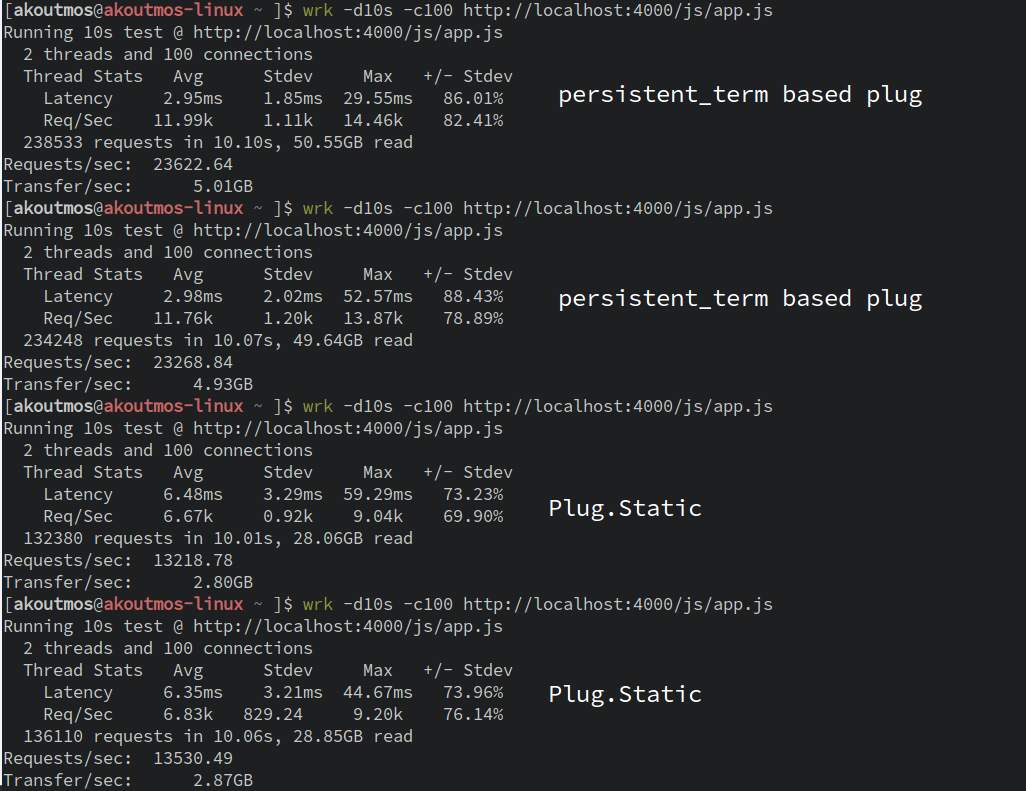 Nice results. I don’t serve static assets with Cowboy but I am using persistent_term to persist some computationally intensive function calls (mostly parsing and graph construction). I wrote the following helper macro for this purpose:

I then have function declarations that look like this:

Plug.Static, through Cowboy and Ranch, offloads the actual transmission of the data to the OS, using :file.sendfile/5. I imagine it has to do more work initially than your alternative, but depending on the file size and the achievable transmission rate it may actually be more efficient when the transfer takes longer.

It might be interesting to run some more tests with different file sizes and transmission rates (preferably on a real network interface). Maybe the optimal solution is a mix, serving small files from persistent_term while falling back to sendfile/5 for large files.

It might be interesting to run some more tests with different file sizes and transmission rates (preferably on a real network interface). Maybe the optimal solution is a mix, serving small files from persistent_term while falling back to sendfile/5 for large files.

IIRC there will be no difference as soon as the files are in memory. The difference would be only if the files are served from the FS, as then sendfile can work fully within kernel, without going through user space.

Isn’t that what we’re comparing here: Plug.Static serving up a file, versus an alternative that serves content from memory, in this case persistent_term?

I’ll put together some more tests tonight with files larger than 1MB and see how things behave. I’ll also throw this on a separate server so it’s not on local host. Will report back with results!

Ahh, I missed that part. In such case Plug.Static with sendfile should be faster in almost all cases (assuming that the storage is quick).

Well, if the socket can accept the entire file contents at once, without blocking, then it might be faster to just dumpt the data into the socket from memory, rather than do the system call dance with sendfile.

But if the file is larger than what the socket can handle instantaneously, causing it to block on write, then the BEAM as to go off and do other work, and come back later when the socket is ready for more. That is overhead that you don’t get with sendfile. This is why I suggested to test with different file sizes, and why testing over the loopback interface is not realistic, since it probably has a humongous TCP window size, so the socket will never block for writing.

Interesting! For purely static assets, we can use a front-end server like nginx. However there could be some quasi-static pages that change infrequently but are visited frequently, maybe we can pre-render them and stash them here?

Another potential performance pitfall with large files: getting the data from persistent_term to the socket is going to cost at least one copy of the data (from the BEAM to the kernel) where sendfile is only transmitting a “get the data from over there” message.