Phoenix LiveView inspired a try for a similar approach in Laravel 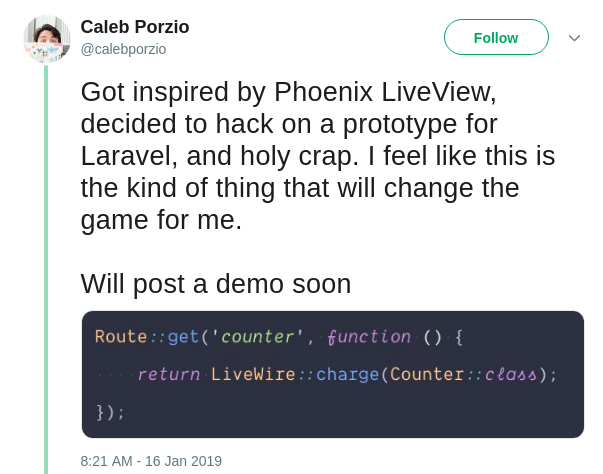 Do you guys think an approach like LiveView will be successful in a language like PHP? I think HHVM may save the day.

The blog post: Proof of Concept: Phoenix LiveView for Laravel

It’s a nice demo. For production you’d need it to not fail or block indefinitely, though. I’ve not yet dealt with PHPs async stuff, so I’m not sure how well it works by now. But it’s nice to see the excitement over stateful applications

Reminds me of myself getting into elixir coming from PHP.

I’ve also transitioned from PHP/Laravel and seeing this LiveView attempt in PHP is very interesting, even more so that it’s definitely not as easy and reliable to accomplish it as it is in the BEAM which feels like a natural habitat for this kind of stuff.

I expect this concept to pop out in every other framework out there in one way or another. But when you don’t have the BEAM ecosystem on your side for free you’ll have extra problems to overcome to achieve similar results.

Phoenix LiveView will bring tons of eyes on Elixir/Phoenix. It already does and it hasn’t even been released yet.