According to the docs, String.split/1…

Divides a string into substrings at each Unicode whitespace occurrence…

I traced the code for String.split/1 to break() here: elixir/unicode.ex at main · elixir-lang/elixir · GitHub. It looks ok to me, though.

Background: This caused problems for me parsing some text. I didn’t realize that this is valid Unicode because String.split/1 and Regex.run where failing on it (although for two different reasons).

The String.split/1 docs also have this line:

Divisions do not occur on non-breaking whitespace.

Urp! Thank you, I didn’t catch that.

The ‘break’ property and the ‘whitespace’ property are orthogonal in Unicode. Definitely significant overlap when looked at from the perspective of Latin scripts but definitely not universal - especially for languages that do not use whitespace between words (like Japanese, Chinese, Thai, Lao, Khmer, Myanmar scripts).

The elixir default for String.split/1 is “breaking whitespace”. By definition, “non breaking” characters should not break words, lines or sentences.

I found an interesting consequence of the absence of whitespace in certain languages: some software handles line-breaking better than others. 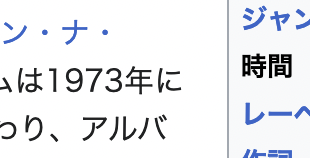 But Safari does break up some words, wrapping character-by-character:

Those two extra characters after 1973 seem to be part of the next word. We can see how Firefox prefers to keep a word’s characters together, at the expense of a pretty flush layout. (See the line above 1973 with extra whitespace at the end.

[My wife, who knows Japanese, told me about the Japanese particles and they’re used to mark word boundaries.]