Hi everyone, I’d like to introduce a library I made for generating QR Codes and address some of the performance gains and some of the drawbacks.

Why use QRusty instead of …?

I think the only real benefit of QRusty is performance. Libraries like EQRCode or QRCode have a wider range of features (color, shapes, etc), plus they’re 100% written in Elixir. I’ve used EQRCode on many projects myself.

QRusty does support the JPG format, which EQRCode doesn’t, but that’s a perk really.

Why make this library?

@philss published Rustler precompiled recently which in my opinion makes using Rust for libraries a real option (check out the blog post and the Thinking Elixir episode). I wanted to see what kinds of performance gains could be achieved for simply tasks like generating QR Codes (markdown parsing could be another one, etc).

I’m not a Rust developer. This was also a chance for me to learn Rust and write something for the first time that’s actually useful for me.

What were the performance gains [updated with QRCode]

It varies by format and by image size but:

I’ve summarised the gains here in the README and also added the raw benchee output here.

It’s worth saying that generating a single QR code is too fast to accurately measure, so the benchmarks are actually testing the time to generate 100 codes.

Why does the PNG performance gain get worse by image size?

You’ll notice that the performance varies between 7x - 27x depending on the image size. I suspect this is because the Rust code deals with the image pixel by pixel (writes each pixel to a buffer).

On the other hand, EQRCode stores a matrix of squares and draws those squares instead of pixel by pixel. Basically, EQRCode is more efficient in that regard and its performance doesn’t vary too much by image size. I haven’t read the code in depth, but you can see mentions of a pixel size and matrix in the png encoder.

Could this gap be fixed or improved? Maybe. I’d be happy to know if there’s a better way than writing to to a Vector buffer when creating generating the file and converting it to a binary.

Are you using it in production?

Yes, we use it on our staging Fly.io environment. Will be deploying to Gigalixir later this week.

Any tips for others using precompiled Rust in a project?

The biggest and most obvious one is that it’s not written in Elixir. EQRCode and QRCode are 100% written in Elixir so they’re much easier to read through and maintain. Unless you’re a Rust developer (and I’m not) then it makes it difficult to track down bugs and add features depending on your background.

For my own clarity I included a few rules in the README about using Rust:

Basically, the end user is an Elixir developer, so keep as much code as possible in Elixir for readability. Leverage Rust only for its performance benefits/access to system level libraries, etc.

The other issue is that the code is very reliant on whatever existing Rust libraries are available. In the case of QRusty, I had to use a fork of qrcode that supports image v0.24. That’s not my favourite position to be in.

Thank you if you made this far

. Let me know what you think and where things could be improved.

Which error correction level is it using?

I actually wasn’t aware of qr code “error correction” (neat), but I a did a bit of sleuthing and it’s “medium” level correction by default (rust docs).

There are four levels that the Rust library implements:

Would be very trivial to add support for the variants so I’m going to look into that. Thanks!

Thank you. Being able to configure this will make it a lot more useful.

FYI this correction is how you can stick a logo in the middle of a QR code and still be able to scan it.

Nicely done. Can you also compare (performance, etc…) QRusty with this QRCode which is purely written in Elixir?

great work, will give it a go on a nerves/raspberry next time around…

FYI this correction is how you can stick a logo in the middle of a QR code and still be able to scan it.

on a tangent but see GitHub - HughChen/qr_image: A web app to generate valid QR codes with readable images. for image/qr code awesomeness… (suppose we should look into landing similar feature in one of the elixir libs… - perhaps utilizing image | Hex) 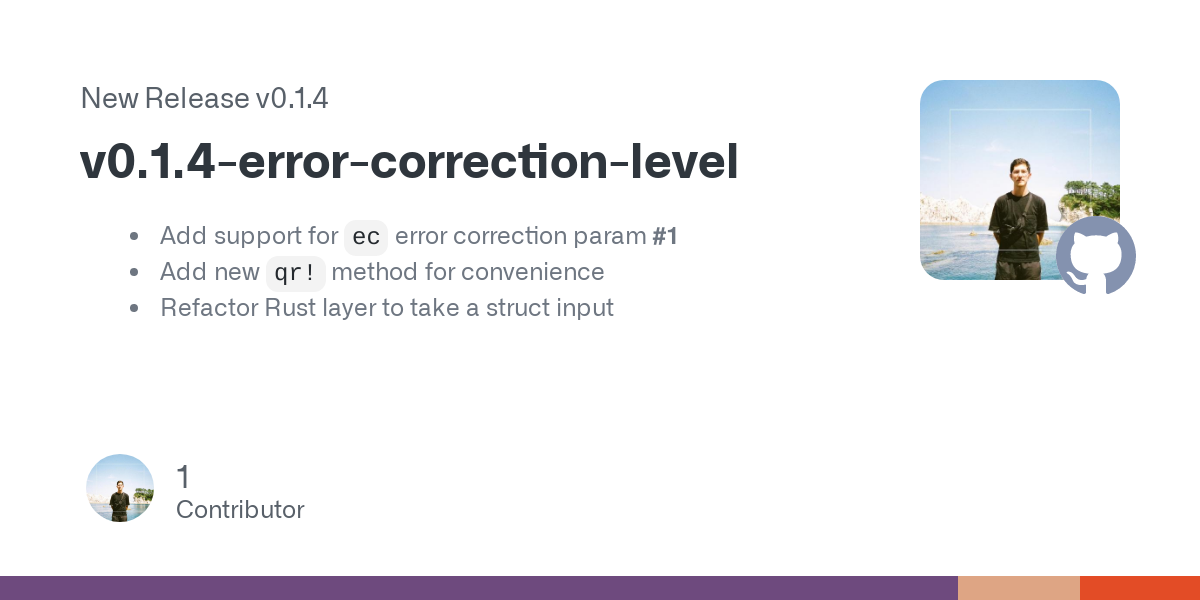 Error correction level added along with a few other things.

I’ll look into it!

Looks great. Looking forward to using it in a project soon.

I added benchmarks against QRCode and updated this post. (MR)

QRCode is actually a really nice implementation. Code is clean and it has lots of supported features including error correction. Very cool. At least by my benchmarks it performs 4x faster than EQRCode too (if speed is important to your use case).

Thank you @nbw for comparison

Btw you noted “[2]: QRCode doesn’t take a size/width/height param” in qrusty repo, but you can change it by scale parameter at Settings in QRCode