Spotify-like app on the beam

Has anyone thought about what a Spotify clone might look like on the Beam? That would certainly be a killer app for the stack. I thought this would make a good New Year project. I’m not much of a front end programmer though, so I am going to need help.

My gut tells me this might have Angel potential. Spotify is doing great right now, so their model is a good one. Their app could be way better though.

I have time and resources, all we need is a whiteboard and an NDA.

I use Apple Music… and the thing I hate most about it is I can only share tracks with other Apple Music subscribers. What I would really like is for there to be an equivalent online platform (like Soundcloud or youtube) that allows you to share the music either as direct links or embed on sites (and forums!) of course that side of it could be funded by ads. …so please add something like that to it

I think Spotify’s competitive advantage isn’t so much their technology and as it is their licensing.

It will not allow you to listen to the full song, but it will give at least the preview.

About @oldpond idea. I see some problems:

I see your problem with Spotify is their desktop application, but are you aware that other players are available as long as you are using Spotify Premium? Mopidy offers such feature, also there is Spotifyd.

It will not allow you to listen to the full song, but it will give at least the preview.

That does not work - it says ‘get Spotify’ or ‘open Spotify’ when you click the play button. Plus, just previews isn’t enough - it needs to be like youtube or Soundcloud for people to want to ‘share’ imo

Licensing would be up to the Artists, wouldn’t it? RadioStation is a music service. The Artists get paid for listing their material and again when the client plays or downloads their product. I would hope they are free to list where they choose. Legal stuff is a big chunk of startup cost.

As always, Aston, thinking into the future. The social aspect is a big draw to the mobile generation. I would push this feature off to 2.0.

Yes, funded by ads for the free version with no ads in the paid is a popular go to market strategy. When I did my Android app, we released for 1.99 and sold two copies. One for test.

I see the challenges. They are big and first to market. I have great respect for their interface actually. According to stackshare, they’re a Java shop. This looks like low hanging fruit in terms of performance gains for a Phoenix app. The api doesn’t look that complicated. The IP alone would cover the cost.

Not all artists own their music. A lot of music is owned by the music labels and you would need to license it through them.

There’s also Google Music, and Youtube Red. And although I didn’t use the latter, the former is the best streaming platform from all I’ve used so far. They have vast music catalogue, and I’m surprised what little niche gems you can find there. And they have superior music matching algorithms (for when you want to play music similar to the one you’ve been listening to already) to any other streaming service I used. But… I diverged. 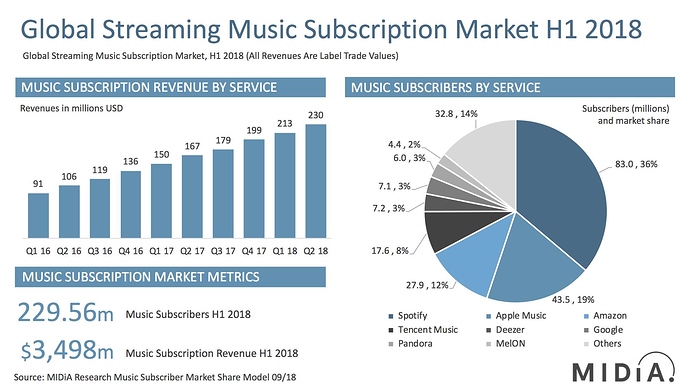 There are few big players, but still looking at how much of market has the biggest player: Spotify, and how many players there are in game, and how the market is steadily growing I think there is still place for few other services at least.

From what I know, music labels have no problems with licensing its music to streaming services. It has proven to be profitable, and that’s all what they care about. Labels are also not so keen to being exclusive to any service, exactly because none of the services has majority, and still there is lot of movement there. If you, as a label, have choice to profit a little more per song from 36% of market, or a little less but from 36% + 19% + 12% what would you choose? But that’s rhetorical question, we all know it.

What they have problems with is licencing music to services that have free tiers. From what I know, Spotify have problems, and recently some Artists are available only on the paid tier, because otherwise Music Labels would pull them as a whole from Spotify.

Market is clearly not saturated.

None of the services have a killer app. All the big players rely on marketing. In my conclusion there is still place for new service (provided it has big enough initial funding), but to be successful it has to have a killer app. And by killer app I mean iOS/Android app along with similar desktop one. And though Elixir seems like a good choice for backend… backend is actually irrelevant.

PS. When it comes to licencing the problem is more than often with the artists themselves and not Labels. Music Labels want as much income as possible, and don’t care about anything else in the end. Some Artist… just read this article: https://www.rollingstone.com/music/music-news/islands-in-the-stream-the-10-biggest-holdouts-in-digital-music-232923/ but mind it’s from 2015 and some things changed: The Beatles are available on Google Music (don’t know about other services), and some didn’t: I can’t find King Crimson studio albums on any streaming service (last i checked).

PPS. It came out as response to @hauleth, but it’s not aimed at you specifically, sorry. Post just grew as I was typing

That is solid revenue growth. Excellent research! It is my experience that 10 developers can make pretty much anything feature complete in 3 months (not saying production ready).

Elixir is a great choice in terms of getting good performance while minimizing dev time. If you’re going to do this, it’s certainly a fine technical choice.

The labels choose both

Higher prices and all of the market…

So, I applied for YC funding for this idea. They rejected it.

Aw sorry to hear that… perhaps you can write up a thread or blog about how to or your tips on applying for funding? Think a lot of people might find it useful

I’ve never been successful at it, so I’m not sure I would be a good teacher.

Have you ever thought about applying this idea to a more niche market? I’m sure there is a music scene somewhere that is being undeserved that you can tap into.

Well, I was thinking the platform would make an excellent generic platform for any internet radio station. Just add branding. Somebody else is going to write this; it’s just a matter of time.

You might want to cater to a specific market first in order to get a foothold, it doesn’t mean that you can have generic features.

I see your point. I am more focused on the backend processing engine than the frontend specifics. The big challenge is processing that much multimedia efficiently. Once you have built an API for that, you can add a market-specific frontend of your choice. I believe the results would have broad appeal to anyone serving up that much media, not just the music industry.