In the attached screenshot (taken from an exercise in “Programming Elixir”) can be shown that BugReport is defined as a struct that, itself, has as a value for one of its keys a struct: Customer.

Yet, when I tried, in iex, both the put_in function and its expanded form, when the owner key received a single string, succeeded.

My understanding of structs is that once I defined BugReport to take a Customer as the type of the key owner, it set in stone.

So, what am I misunderstanding about defining structs? 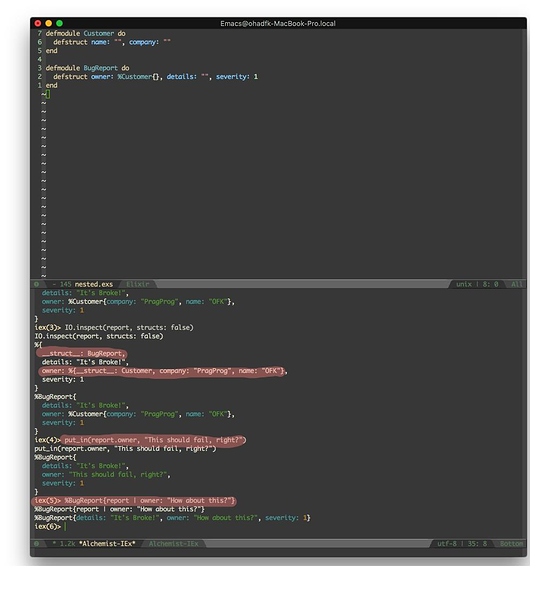 defstruct takes a keyword list. The keys describe the keys for the struct the values are the default values when the struct is created. The type of a value under a key isn’t fixed (Elixir is dynamically typed). Required keys are identified with the @enforce_keys module attribute.

You can use @type to indicate what the type should be for use with dialyzer. See this and this for the limitations of success typing.

Why should it fail? Elixir is a dynamically typed language - there are generally no type constraints. The values in struct declaration are about a default value when a new struct is created - they don’t mean anything more and in particular don’t affect how struct can be updated.

As others mentioned, Elixir is dynamically-typed.

However, you can define the structures as Ecto schemata and enforce types via the Changeset functions – even without using a database (many people wrongly assume using Ecto mandates a database). This thread has pointers on how to use Ecto without a database – maybe even better resources exist.

You can even use plain structures without Ecto wiring, as long as you pass in typing information when assigning struct fields.

Have in mind though, if you are gonna use Ecto’s Changeset, that should be the only way you manipulate the structures defined through it. No normal assigments or Access functions should be used (like put_in in your code).

Elixir is dynamically-typed. However, with a library like Domo, it’s possible to validate struct’s type explicitly as the following: