Imagine you have many actors (which are not identified by name) behind a supervisor. If I wanted to have a facade to work with them so I can add some sort of messaging logic (i.e. round robin, hashing the sender, the message), would you add it on the supervisor or have another entity reify this behaviour and interact with them via Supervisor.wich_children? Is there even another pattern?

To put an example, lets play with coffee. Imagine I have many espresso machines in my shop and I’d like to expose this interface 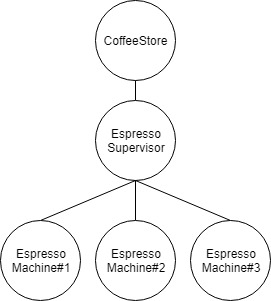 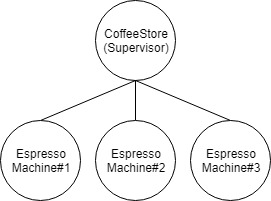 I’d only keep spawning and restarting logic on the Supervisor I’d love to hear what the more experienced guys has to say.

I’d use poolboy to manage the workers. Poolboy supports FIFO and LIFO by default. I guess you could look at its implementation.
*If the pool is just workers

There is another pattern, which is the pattern that is most commonly advised for these kinds of situations:

In the diagram, a normal arrow means ‘supervises’, a dashed arrow means ‘monitors’, and a normal line means ‘calls functions of’.

This is the kind of setup you’re building towards in e.g. the KV Registry (AKA the ‘Mix & OTP Guide’) on the elixir-lang homepage (specifically the 4th chapter about supervision). It also is explained in more detail in for instance ch. 9 Isolating error effects of the book Elixir in Action.

@Qqwy design is a very very common pattern for the problem OP mentioned.

However @Charlyzzz I would question if you actually need some sort of messaging logic. Just let the Supervisor add as many children as it needs and not constrain it. By default the current BEAM can handle over 260k processes. Constraining in any way complicates the architecture and BEAM’s fail-safe mind-set.

I’d use poolboy to manage the workers […]

This was the second thing that came to my mind.

There is another pattern, which is the pattern that is most commonly advised for these kinds of situations:

Thanks for your answer. I’ll try to dig more into it and make an example. I had in my mind that KV.Bucket example, but couldn’t remember where it was.

What puzzled me was that in Akka this concept is reified as Routers and here it’s not provided out of the box. Maybe it’s an opportunity for a new library?

Thanks guys, I’m heading back for some experimenting.

KV.Bucket example, but couldn’t remember where it was.

I think you are mentioning the example mentioned in the official elixir guide.