You might remember me as the author of Joy of Elixir: https://elixirforum.com/t/joy-of-elixir-self-published-free/

I’ve got a new book out which shows you how to do the Toy Robot exercise in Elixir: 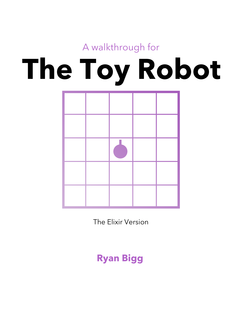 The Toy Robot is a common interview exercise for new programmers. This short book will take you through how to implement it in Elixir in a BDD-style, with some great explanations and imagery along the way.

The first 6 chapters of the book cover how to solve the common part of the exercise. Chapter 7 (coming soon) covers processes and supervision trees while building the foundations of a multiplayer Toy Robot game. Chapter 8 will finish that game.

I view this book as a “sequel” to things like Joy of Elixir, the getting started docs for Elixir or Elixir School. It’s a real (enough) project with real problems and I hope people enjoy reading it and following along.

Let me know what you think in this thread!

Seems interesting! Could you share one or two sample pages from the PDF?

How about two whole chapters? http://samples.leanpub.com/elixir-toyrobot-sample.pdf

Thank you very much, so far it’s been an enjoyable read! I spotted some (few) typos, though. Do you have something like an issue tracker?

On a side note: Could you provide some insight into your workflow for creating the book? Did you use the Leanpub markdown right from the start or was there additional tooling?

No issue tracker so to speak, but if you email me (me@ryanbigg.com) with the page number where you found the mistakes and a bit of context around them, I should be able to fix them up quick smart!

Here’s a short version of the workflow of writing the book:

The ERB part of the process exists because there’s some fiddly Leanpub-specific syntax that I can automate away with some pretty basic Ruby. (This part is not written in Elixir yet because I wrote it back when I only knew Ruby

Another thing is that I use VS Code’s file-shortcuts.code-snippets file to have tab-complete for common code blocks within my books. I configure it like this:

Then I can type ro.ex and hit <Tab> and it will fill it out to be:

Then if I put in code in that box and hit <Tab> again, it will jump to the end of it. That speeds up writing a bit!\

Thanks for the elaboration. Cool idea to abstract away fiddly syntax with ERB. Did you use any tools to render your book locally (without pushing to Leanpub)?

No tools to render the book locally. When I’ve written books in AsciiDoc I use my other hand-rolled toolchain here: https://github.com/radar/asciidoc-toolchain. Rails 4 in Action was written in AsciiDoc, for instance.

I’ve covered all the content I set out to cover in this book, and so now we’ve got plenty of words covering:

I’m going to spend this next week reading through it myself and making sure everything is as correct as it can be and then I would say this book is done!

Nice Ryan, I love your books!