TL;DR: Watchdog (not related to watchdog on hex.pm) is a library that lets you always have a single instance of your GenServer in your cluster, which will preserve its state and allow you to keep using it without interruption as it’s automatically moved around the cluster during node shutdowns/deployments/etc.

Here’s something I’ve been messing around with lately that I’ve had a lot of fun with and thought I’d share in case anyone finds this useful.

Imagine you have an Elixir app. Let’s say you have a GenServer or a few that are meant to be “singletons” in your cluster - you never want to have more than one running.

This is generally a pattern you want to avoid if you can, but sometimes it can be difficult to escape without significant effort or external tools (locks, rate limiting, certain types of metadata, etc). And I’d like to stay within Elixir if possible.

Watchdog is a proof-of-concept library that makes this sort of pattern significantly easier to accomplish than with existing solutions, thanks to relying on OTP’s amazing principles.

to your supervisor and you’re good to go. This is a GenServer, but with special powers.

The implications of this are pretty cool.

My favorite is what this means for the typical scenario of rolling deployments, like on Heroku/Render/Fly.io/etc. You have a GenServer that’s processing tons of requests, and you need to deploy a new version, so you spin up a new deployment and need to shut down the old one.

Traditionally, this results in lost data - if you’re keeping state in a GenServer, when the new process in the new deployment is started and old one is eventually killed, anything that was held in the state of the original is lost, including any GenServer.call requests that were sent after the SIGTERM, which will all error out with timeouts.

You could wire a handoff yourself, but this can be tricky to do with process registration/unregistration timing, trapping exits, and so on.

Watchdog makes this dead-simple. Just define an import_state/2 function in your SingletonGenServer:

If this function is called, that means your process is the new singleton and is taking over the state of the old singleton process. In this function, do whatever processing you need to do to the state to get it ready for the new GenServer, then return the new state. That’s it - you’re good to go.

How about in-flight messages/calls/casts that were on the way? You don’t have to do anything special at all, Watchdog handles those automatically. If your GenServer was being slammed with calls and some came in after the SIGTERM was sent, no worries - all those not-yet-processed calls will be transferred to the replacement singleton process which will pick right up where this one left off.

How do I use this? 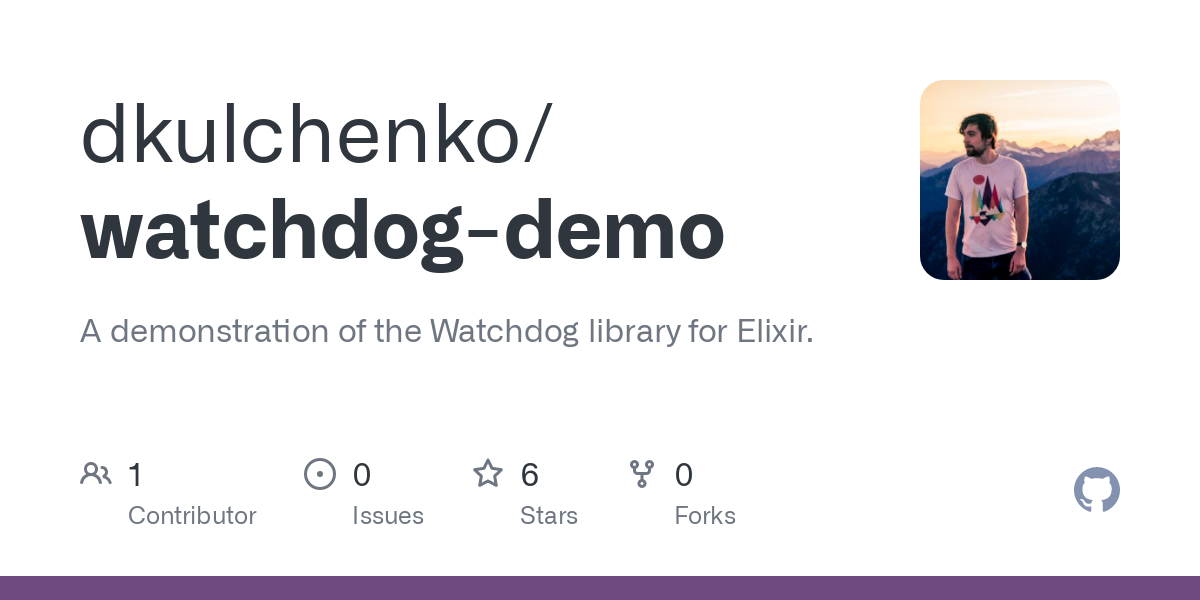 GitHub - dkulchenko/watchdog-demo: A demonstration of the Watchdog library...

This is a proof-of-concept, not a published library (yet). Please feel free to take any code from this repo under MIT, but no warranties or support provided.

To use Watchdog, you just need watchdog.ex and the watchdog directory in lib from this repo, put into your app. Then add:

to the children of your main supervisor. To write your GenServer, you just need the following:

Don’t define a start_link, init, or terminate callback - Watchdog handles those for you. Instead, define a setup/2 function that does anything you would’ve needed to do in init.

setup/2 has the following signature:

as you might expect, this is the initial state of the GenServer.

That’s it - you have a magic GenServer which will move around your cluster as needed when the node it’s running on is shutting down (or during netsplit resolution).

How does this work?

OTP provides a great abstraction to ensure a single process runs in the cluster, by way of the {:global, :atom} tuple. But on its own, it’s not quite enough for a robust solution.

So Watchdog provides a cluster-aware supervisor which will always attempt to start a process as long as there isn’t one currently running in the cluster. If it finds out that another supervisor has already beat our node to it, it will simply monitor that already-started process and react as soon as it goes down.

If two Elixir nodes are started separately and join each other later (or in the case of a netsplit), you may end up with two instances of a singleton which suddenly discover each other when the cluster is formed. So we need to resolve the conflict - only one process can be in the cluster, so which one stays?

{:global, _}'s default conflict resolution brutal_kills a process at random. Watchdog tracks node age and shuts down the oldest process, as that’s more likely the one that will not be sticking around in case of a rolling deployment.

Additionally, instead of a brutal kill, we send a special message which allows the outgoing GenServer to gracefully hand off its state to the “winner” GenServer.

If the node is shutting down (SIGTERM or otherwise), we trap exits and hand off GenServer state to another node right before shutting down the GenServer. We pick the newest node in the cluster, as that’s the more likely the one that was most recently deployed and will stick around longer than an older node.

Same logic happens if we’re doing a conflict resolution kill instead of a node-shutting-down kill.

There might be some messages that haven’t been handled yet in the mailbox as we’re shutting down. In the interest of not losing them, they’re pulled from the mailbox and sent to the replacement GenServer process via send, to reintroduce them back into the new process’s mailbox as if nothing ever happened.

This can be combined perfectly with libcluster and a cloud like Fly/Render/etc to make sure your singletons automatically stay running during deployment handoffs. Just configure libcluster and set Watchdog up as in the instructions above, and you’re all set.

Anyway, just wanted to put that out there as a proof-of-concept. It’s surprisingly simple for how much it’s able to do, as a large thanks to the absolute amazingness that is Erlang/OTP.

Planning on refining this, adding tests, and using it in production. Hope someone gets some use out of it!

Really cool! I’ve also spent some time experimenting with OTP patterns in the context of an experimental library and was similarly amazed by how much you can get almost “for free.”

I haven’t looked at the implementation yet, but how do you think this might work with a dynamic supervisor? Let’s say you have ephemeral coordinating processes that you want to spin up and maintain until they reach some kind of natural conclusion, and then they exit. You want to guarantee that only one is alive/available by a registered name, but the name may not be static. (E.g. named in a Horde registry.)

The existing design to a certain degree relies on there being a static set of processes (because every node in a cluster is individually monitoring all the singletons, it needs to know what they are ahead of time).

But it should be pretty easy to adapt to a dynamic setup.

And (I believe) that’s about it to make that work!

When the dynamic process is done, Watchdog is already set up to automatically unmonitor a singleton that exits gracefully (not crashing or shutting down), so once the singleton is done working, it just needs to return {:stop, {:shutdown, :done}, state} or similar and the cluster would simultaneously unmonitor the dynamic singleton, and we’re good to go.

Thanks for the detailed response! That all definitely seems doable.

One thing that struck me while reading through the code – and you mentioned this – is that there’s really not a huge amount of code required to do this.

This makes me wonder whether it would be possible to “package” this as more of a behaviour/pattern than a library that manages supervision/registration directly. It would probably still be a library, but perhaps you bring your own supervisor and registry. Those can be a static Supervisor, DynamicSupervisor, Horde.DynamicSupervisor, etc. that implement @behaviour Watchdog.Supervisor, and then whatever registry you want that implement @behaviour Watchdog.Registry (though I don’t know that this is necessary, since I think the Watchdog registry is just an extremely thin wrapper around the standard registry behaviour).