so I have a really weird memory leak problem: I have an app the calculates a schedule for a given month. To do that I have like 350+ users, which assign themselves free slots in predefined shifts. Basically there is a 1:n relation between shifts and slots, and a 1:1 between slots and users. As standard month therefore has ~50k slots to check and assign users to it, based on some application logic rules. Rules are just modules that follow a certain behaviour and return a score, the user with the highest score then “wins” the slot and is assigned to the shift. So far so good, I have unit tests for everything. Now the weird thing is, after the calculation is finished I always run into a weird memory leak, see the image below. 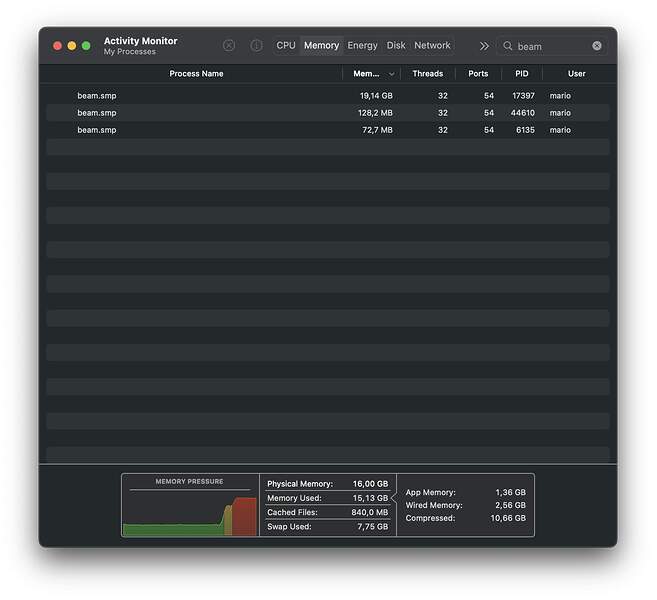 First this happened when starting a supervised Task from my LiveView which would take care of the calculation. Thanks to @hubertlepicki I was able to figure this problem out: Looks like copying a lot of Ecto records including associations from one process to another is not a very good idea.

Now I even get the memory leak in iex when I try to autocomplete like this: scheduler.sche... scheduler is a state struct of the Scheduler module which basically looks like this: defstruct schedule: [], rules: [], slots: [] Are 50k+ records in memory to much for beam to handle? Also why does the autocomplete crash, but accessing it without autocomplete does not. Could it be that autocomplete tries to copy the data to another process? And yes phx.server also crashes with the memory leak after the calculation, not sure where the copying happens there yet.

Are 50k+ records in memory to much for beam to handle?

Unless those records are QUITE substantial (19GB memory / 50k records = 380 kilobytes apiece) this doesn’t seem like the whole story.

Is there a way to get the memory size of a variable? The things I tried always resulted in further crashes. Or could it be that preloading all the associations lead to a endless cycle? I’m must say I’m not 100% familiar with Ecto preloading.

If the associations that you’re preloading involve the same records more than once, you might encounter headaches due to loss of sharing. There’s a good discussion in the BEAM efficiency guide with some examples of getting the byte-size of various terms.

An example of what I’m thinking of in the standard posts/comments/authors pattern would look like:

Here, there are going to be a LOT more resulting Post structs than rows in the Post table since every comment has a new set of the author’s posts.

In some ORMs in languages with mutable data this can be made efficient with an identity map, resulting in a cyclic graph of objects - but that shape is not available in Elixir.

Is there a way to get the memory size of a variable?

:erts_debug.size/1 will emit the size of a variable in words.

Without seeing your code it’s a bit hard to guess at things like this. I would turn on debug ecto logging and make sure that you aren’t seeing unexpected querying.

I will try to share more code, but :erts_debug.size/1 now already runs for more than 10 minutes, so I guess the data is too complex.

I guess this is the problem… Thinking now about a way to prevent this somehow. I really wanted to make the code as much independent from Ecto as possible. In fact I had a working (in-memory) solution, before even adding Ecto to the app.

Yeah this means you have a giant value in a single variable. This doesn’t sound like a memory leak, this sounds like you’re somehow putting tons of data into a single value.

Thinking now about a way to prevent this somehow. I really wanted to make the code as much independent from Ecto as possible. In fact I had a working (in-memory) solution, before even adding Ecto to the app.

If your problem is the Ecto preload, and not an huge dataset in one variable, then you may want to see if the official docs on preload queries can help:

Sourced from this Stackoverflow question: 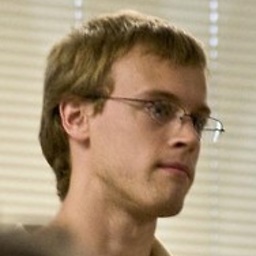 Elixir/Ecto: How can I batch the preloading of an association?

Another resource I found on preload is this talk: 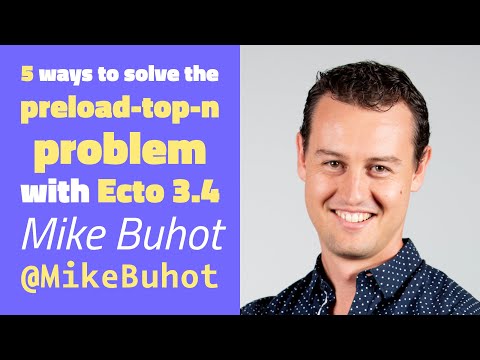 In the past Ecto preload had issues with memory as per this issue:

I've debugged curious case of OOM error in our system and found out that there's… unexpected, huge memory spike in certain situations with `Repo.preload`. ### Environment * Elixir version (elixir -v): 1.9.4, 1.10.2 * Database and version: PostgreSQL 11.7 * Ecto version (mix deps): 3.4.3 * Database adapter and version (mix deps): ecto_sql 3.4.3, postgrex 0.15.3 * Operating system: Linux, macOS ### Current behavior When ALL of the following are true, the 2nd `Repo.preload` causes memory spike of couple of GB: 1. preload twice (preload again after it was already preloaded) 2. the preloads need to have `[has_many_assoc_for_schema_a: [belongs_to_assoc_for_schema_b: has_many_assoc_for_schema_a]` 3. there's more than 1 top level assoc preloaded 4. preloading is executed concurrently (`in_parallel: true`, _which is default_) With this you can observe the spike (~1 GB in the minimal example app I link below, and we see 3-5 GB in our system). With explicit `in_parallel: false` there's no mem usage at all, and the 2nd preload is basically a no-op like it should be. I created a minimal project with `ecto` + `ecto_sql`, with couple of schemas that mimics our setup, which allows reproducing this problem in consistent way: https://github.com/sickill/ecto-preload-bug (instructions on how to trigger and observe the spike are in the README). The amount of records for the top-level has-many assoc for schema "a" plays a role here, with a handful of records the spike is there but rather not very noticable. As the amount of records grows the spike seems to grow exponential-ish. First preload: <img width="694" alt="single-preload" src="https://user-images.githubusercontent.com/17589/81404128-1633a900-9135-11ea-988f-6654773f9a7f.png"> All data gets preloaded and you can't even see any mem usage change. Now, when you try to preload again: <img width="713" alt="double-preload" src="https://user-images.githubusercontent.com/17589/81404187-382d2b80-9135-11ea-8214-1c6fe074c4d3.png"> ### Expected behavior No significant extra memory usage, like with `in_parallel: false` case.

Why is this exactly a problem? I mean, even if I split this up into multiple lists or whatever … having something like a struct as a container above the data ends up in a single giant value again.

Why is this exactly a problem?

I mean that there is a bug in your code where you’re loading more data than you intend to. There’s no way 50k records, even with preloads, should be taking 19gb. There’s gotta be a bug.

You got somewhere with this? Super curious.