What are these "quirks" errors and how to get rid of them?

I see 3 issues/errors in my Chrome console: 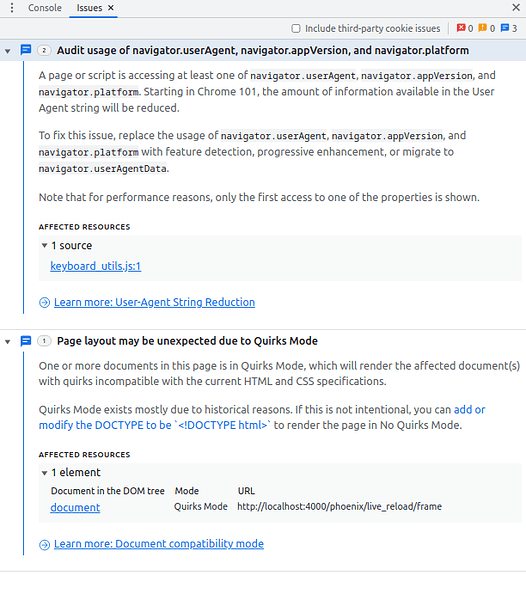 Can anybody explain what they mean and how to get rid of them?

The browser is interpreting your document as pre-HTML 5 because you’re missing the <!DOCTYPE html> tag. Without that tag, you’re entering the world of quirks (“hacks”) that browser need to employ to maintain backwards compatibility with older HTML specs.

In computing, quirks mode refers to a technique used by some web browsers for the sake of maintaining backward compatibility with web pages designed for old web browsers instead of strictly complying with W3C and IETF standards in standards mode. The structure and appearance of a web page is described by a combination of two standardized languages: However, most older web browsers either did not fully implement the specifications for these languages or were developed prior to the finalization o...

Nope, I have this at the beginning of my root.html.heex file:

I mean, perhaps it’s only extensions in Chrome, because when I go in the incognito mode and turn off all browser extensions it doesn’t show any issues.

The error is for /phoenix/live_reload/frame, which does not use your layout. You can probably just ignore it given it’s related to dev tooling.

This has recently been addressed, but it hasn’t been released yet.

Yeah, I forgot that I have set live code reloader to false. When I turn it back to true in dev.exs file, the live_reload frame error message gets back ;D.

But if it is only during development, so, it is not a major issue.