What is your testing philosophy?

In the Udemy Elixir Bootcamp course we’re told something along the lines of:

Write doctests as if you were showing someone how your functions work. Write unit tests for behaviours that really matter to you inside that module.

How does everyone feel about this and what is your own philosophy when it comes to testing?

After 10 years of developing and writing thousands of tests, I learned that the probability of making an error is quite similar in code that “does really matter” (whatever it means) and does not. I always try to follow this simple rules:

There has been a thread with some critics: BDD / TDD criticized

Well organised tests are important so that future developers can easily see which contexts have been tested. The test name should reflect what the assertion is doing, and assertions relating to the same piece of functionality (but executing it in different contexts) should be grouped together. In this way, tests double as clear specifications for what the code should and should not do.

I have worked with teams in the past that had far too rigid tests, which meant that every feature-change needed to be changed both in the code, and in, say, 20+ tests. As the ‘Why most unit testing is a waste’ paper (which the thread @StefanHoutzager linked to discusses in more detail) said: A test that never fails tells you just as little as a test that always fails.

Also, ‘code coverage’ is about as good an indication of how well-tested your application is, as ‘lines of code per day’ is for developer productivity.

What I do think is important is the mindset behind TDD, which is: Think before you code. In practice, I write most tests after I’ve written my code, but I do believe that tests are important. It is a delicate balance: Too little tests, and your application might perform weird at times you do not expect. Too much tests, and your application becomes hard to maintain. Sola dosis facit venenum.

I myself am a great fan of Hammock-Driven Development, because it results in better code even without requiring you to write all tests beforehand (and because hammocks are awesome, of course!): 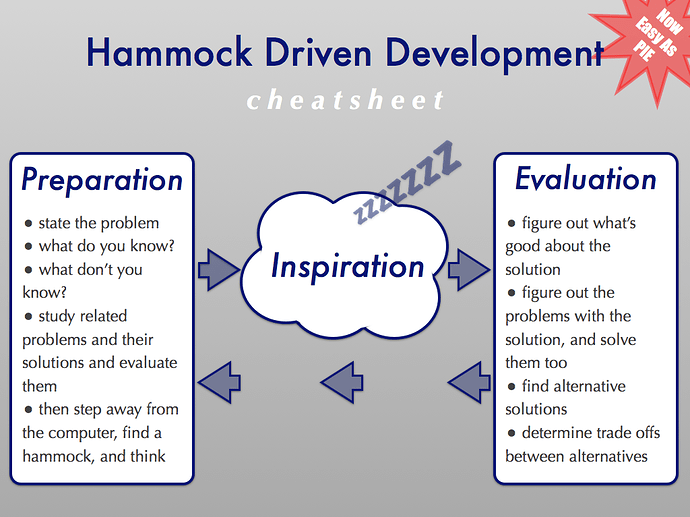 As for testing in Elixir: I wholeheartedly agree with the statement you quoted above from the Udemy Elixir Bootcamp course. Doctests are great as examples and simple unit/regression tests. When you need to test some edge cases that arise in a more complex context, then these tests can better be written in their own test file.

Another thing: Many people that are new to Elixir think that the “Let it Crash” mentality also means to “Let it burn”. But I think that what we actually usually mean is: We write tests to avoid the simple bugs, but we won’t actively look for the Heisenbugs, because these will find you. It is ridiculously hard to spot a Heisenbug, and instead of wasting too much time on this (and still possibly missing one), it is better to just make you application fault-tolerant: prevent it from burning down even if it crashes.

Well it took me really a while to grok this, but I only can sign what you have learned at udemy.

A doctest is not to test you function via documentation, but it is to find flaws in your documentation after changing the API a bit.

Besides of this, my philosophy of testing is varying

I really do like to test before I implement, but thats not always possible.

At work we do only test a very small subset of critical functions and we do introduce regression tests as soon as there have been known bugs fixed.

In general I realized that I do test much less when I do have a very strong type system, Often I only have one or to tests that test rough behavior (valid input gives valid output and invalid input will throw an exception, stuff like this) while in languages with limited or no compile time types, I do much more testing and even try to do some randomized stress-tests to uncover hidden edge-cases, very similar to property based testing.

That is just absolutely backwards; TDD is intended to address fluid
and poorly-defined requirements as part of an iterative development
process where refactoring is an accepted regular activity.

And yes, I’ve seen cases of “too many tests” or “100% test coverage”
that obviously came after the fact and do little or nothing to improve
code quality - but that is not TDD.

For anyone who hasn’t read Kent Beck’s seminal book, I recommend it

I haven’t learned the Elixir tools (including doc-tests) well enough to apply this as rigorously as I do in other languages, but generally:

The majority of apps I built has been a web interface for a database, mainly CRUD applications. I used to have this assumption that unit tests are great and you need to unit test all the things; that you test for the sake of testing.

Except when it just doesn’t make sense.

CRUD apps tend to just be a glue for other components. Most of the time, there won’t be much logic involved. So you write a unit test for a service that constructs and runs your query by mocking the DB? You essentially are testing the query generator library, and the authors have tested that for you. The information you need is whether you glued the lib correctly, which means integration tests.

Where unit tests make sense in CRUD apps is for your controllers, where it might have branches depending on the params. You need to mock out the DB service for that. But other than that it would be mostly glue code and you’ll be writing e2e tests by spinning up the server and hitting the endpoints with test requests.

So the base of my philosophy is: design your test based on what information you would like to get. There are several articles which inspires me for this, like Trustworthy Unit Tests – Testing the Data Access Layer and Writing Tests for Data Access Code – Unit Tests Are Waste.

Of course, you would need unit tests if your code includes complicated algorithms with a set of inputs generating possible outputs.

All that, but I’m still somewhat noob in testing, so you might want to take my opinion with a grain of salt.

A doctest is not to test you function via documentation, but it is to find flaws in your documentation after changing the API a bit.

E…yeah… I do admit that testing almost vanishes when I use a language with a decent type system (especially type systems that can encode extra attributes other than just storage, like C++ templates and ML languages can do). >.>