Hi and Hello Every Elixirian.

After Learning the Elixir basics, I struck then. I have no idea of how to put my Elixir Knowledge in practice. I want to move next level, but I am helpless. I am not that expert in elixir to work on innovative projects by myself that too alone. But I still managed with **iex **, but that does not last long. I Google and found the article on this topic , that really innovative for Intermediate level Elixir Programmer. So, I had thought of sharing and I added a bit of scent and explanation with clear steps.

After creating the project dive into the folders of project.

You will find the lib folder which holds the application code base and mix.exs file which is holding the application or project meta data like dependencies, creator, links, etc…

Now run mix to compile your app the first time after changing the directory to app root path.

Elixir uses escript to build an executable file that runs as normal script . Its only dependency is Erlang installed on your machine. Elixir is not necessary, since escript embedds Elixir into the compiled app. At first we need to set the main_module in mix.exsby extending the existing function:

escript: [main_module: Commandline.CLI] add this line in the project definition

Go to the lib directory and create new directory commandline and new file cli.ex with main/defintion

args holds the command line arguments you will pass while executing the file.

OptionsParser.parse This parse the command line arguments and returns the tuple containing three values where we’re only interested in the first one. The second element holds remaining arguments and the last one invalid options. opts is a Keyword list containing all options converted to atoms with their associated value…

To explain this I will take one example.

Suppose you need to pass the filename as an option you can do that as follows .

./commandline --file "blackode.txt" here --file is switch. You can pass as many you want. Here you can access that filename as opts[:file] which returns the string

./commandline -f "blackode.txt" here -f we have created aliases for file so we can access this as opts[:file] too as well.

Both approaches are very common for passing the data through the command line.

This creates the executable file with name commandline

Run the Executable file with an argument

The main function of the module takes all arguments, parses them and outputs a string to stdout 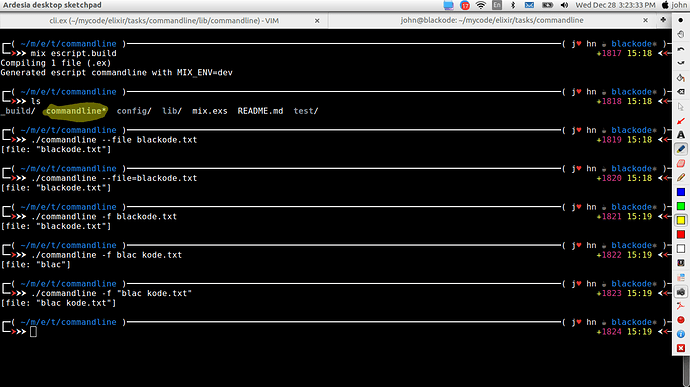 The yellow marked file is our executable file

Once you have your project up on Hex / GitHub / any random Git repo, you can build & install it very easily if you’re on Elixir 1.4+:

If you’ve pre-built the escript and published it to a local web server, like Artifactory or something, you can also install it from there:

For more details, see the documentation:

I think this makes sense as a wiki as well. Done.

I think this makes sense as a wiki as well. Done.

Thanks this was a most useful article.

There are a couple of typos I spotted, you may wish to update them.

This should be:
./commandline --file "blackode.txt"

Herr you can access that filenames as opts[:file] which returns the string

This should be:
Here you can access that filenames as opts[:file] which returns the string

There are a couple of typos I spotted, you may wish to update them.

Firstly Thanks for taking time and reading.

I have corrected the statements you have been spied.
You have a great sight.

Thanks for pointing out.