Note: this is a release candidate. Please try it out and give us feedback! Given this is a pre-release, you may not find it in your package manager. In this case, pick one of the alternative methods for installation from our Install page.

Elixir v1.12 is out with improvements to scripting, tighter Erlang/OTP 24 integration, stepped ranges, and dozen of new functions across the standard library. Overall this is a small release, which continues our tradition of bringing Elixir developers quality of live improvements every 6 months.

This is the last release to support Erlang/OTP 21.

Elixir v1.12 brings new conveniences for those using Elixir for scripting (via .exs files). Elixir has been capable of managing dependencies for a quite long time, but it could only be done within Mix projects. In particular, the Elixir team is wary of global dependencies as any scripts that rely on system packages are brittle and hard to reproduce whenever your system changes.

Mix.install/2 is meant to be a sweetspot between single-file scripts and full-blown Mix projects. With Mix.install/2, you can list your dependencies on top of your scripts. When you execute the script for the first time, Elixir will download, compile, and cache your dependencies before running your script. Future invocations of the script will simply read the compiled artefacts from the cache:

Mix.install/2 also performs protocol consolidation, which gives script developers an option to execute their code in the most performant format possible.

Note: Mix.install/2 is currently experimental and it may change in future releases.

Another improvement to scripting is the ability to trap exit signals via System.trap_signal/3. All you need is the signal name and a callback that will be invoked when the signal triggers. For example, ExUnit leverages this functionality to print all currently running tests when you abort the test suite via SIGQUIT (Ctrl+\\ ):

This is particularly useful when your tests get stuck and you want to know which one is the culprit.

Important: Trapping signals may have strong implications on how a system shuts down and behave in production and therefore it is extremely discouraged for libraries to set their own traps. Instead, they should redirect users to configure them themselves. The only cases where it is acceptable for libraries to set their own traps is when using Elixir in script mode, such as in .exs files and via Mix tasks.

Erlang/OTP 24 ships with JIT compilation support and Elixir developers don’t have to do anything to reap its benefits. There are many other features in Erlang/OTP 24 to look forwards to and Elixir v1.12 provides integration with many of them: such as support for 16bit floats in bitstrings as well as performance improvements in the compiler and during code evaluation.

Another excellent feature in Erlang/OTP 24 is the implementation of EEP 54, which provides extended error information for many functions in Erlang’s stdlib. Elixir v1.12 fully leverages this feature to improve reporting for errors coming from Erlang. For example, in earlier OTP versions, inserting an invalid argument into a ETS table that no longer exists would simply error with ArgumentError:

Elixir has support for ranges from before its v1.0 release. Ranges support only integers and are inclusive, using the mathematic notation a..b. Ranges in Elixir are either increasing 1..10 or decreasing 10..1 and the direction of the range was always inferred from the starting and stop positions. Ranges are always lazy as its values are emitted as they are enumerated rather than being computed upfront.

Unfortunately, due to this inference, it is not possible to have empty ranges. For example, if you want to create a list of n elements, you can express it with a range from 1..n, as 1..0 is a decreasing range with two elements.

Elixir v1.12 supports stepped ranges via the first..last//step notation. For example: 1..10//2 will emit the numbers 1, 3, 5, 7, and 9. You can consider the // operator to perform “range division”, as it effectively divides and rounds up the number of elements in the range by step. Steps can be either positive (increasing ranges) or negative (decreasing ranges). Stepped ranges bring more expressive power to Elixir ranges and they elegantly solve the empty range problem, as they allow the direction of the steps to be explicitly declared instead of inferred.

As of Elixir v1.12, implicitly decreasing ranges are soft-deprecated and warnings will be emitted in future Elixir versions based on our deprecation policy.

Elixir v1.12 has the additional of many functions across the standard library. The Enum module received additions such as Enum.count_until/2, Enum.product/1, Enum.zip_with/2, and more. The Integer module now includes Integer.pow/2 and Integer.extended_gcd/2. Finally, the Kernel module got two new functions, Kernel.then/2 and Kernel.tap/2, which are specially useful in |> pipelines.

Unfortunately, due to this inference, it is not possible to have empty ranges. For example, if you want to create a list of n elements, you can express it with a range from 1..n, as 1..0 is a decreasing range with two elements.

So many nice things

Where can I check these 2?

An increasing range first..last//step is a range from first to last increasing by step where step must be a positive integer and all values v must be first <= v and v <= last. Therefore, a range 10..0//1 is an empty range because there is no value v that is 10 <= v and v <= 0.

Similarly, a decreasing range first..last//step is a range from first to last decreasing by step where step must be a negative integer and values v must be first >= v and v >= last. Therefore, a range 0..10//-1 is an empty range because there is no value v that is 0 >= v and v >= 10.

Sorry, for your example I was thinking n to be >= 1

Love the addition of tap and then to streamline pipelines.

Also Bob got into it and have builds from future: 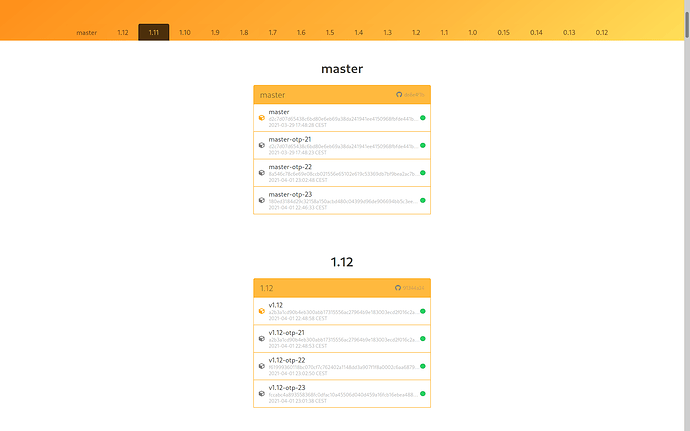 but seriously … after what time those lists gets updated?

The builds.txt does get updated each time a build by hex‘s bob finishes. The name afaik is directly pulled from the branch/tag names on github. So maybe this was an april fools joke or just mistake. Reverting it afaik would need manual intervention here. Not sure why the proper rc version would be missing still.

The tag for the release was created 6 hours ago, but the datetime in bob‘s builds.txt points to evening of april 1st, so it seems somethings off here for those builds. Also the 1.11. rcs are correctly labeled in the file, while for 1.12 there should be a 1.12.0-rc.0 as part of the 1.12 segment of versions.

There was a hiccup when building docs and releases but it should be fine now (thanks @ericmj for fixing it!)

Speaking of docs, you can also check out the rendered v1.12 changelog on hexdocs.pm where all the mentions of modules and functions will have nice links

Here’s a note of thanks for Mix.install, which I’ve been testing the past few weeks. The Mix.install method of managing script dependencies is IMO superior to NPM or RubyGems. It’s a small feature but can greatly expand the utility of Elixir - bravo!

tap and then are superb! Thanks a lot.

I love how the documentation on then reads

This is most commonly used in pipelines, allowing you to pipe a value to a function outside of its first argument.

… as if people were already commonly using it anywhere

… as if people were already commonly using it anywhere

Do you really think that literally nobody were having a fun using the Elixir's master branch?

I wonder why is tap a macro ?

I would believe that the following would work too. (Well I know it works since like many I have a bunch of those in different projects).

Edit: oh, I guess it is an optimization to remove a useless call, since a pipeline AST will be unflattened?

[Proposal] Make tap/2 and then/2 macros