How fast is your internet connection? 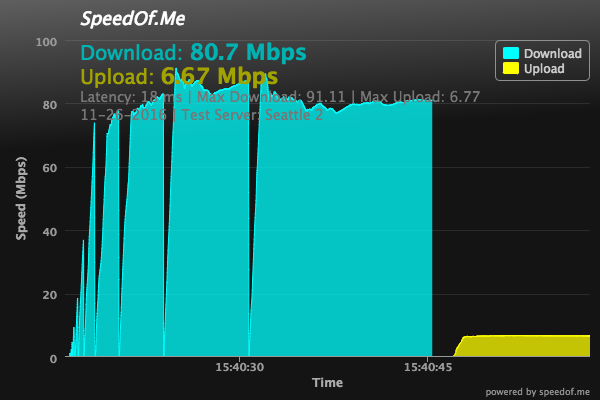 About $110 a month for cable internet and television. Interesting the download speed difference between the two services.

I got pretty much the same on speedtest.net and speedof.me.

I’ve also installed the speedtest.net (Ookla) Mac app, and the great thing about this is it keeps a history and gives you your highest and average speed.

Living in a corrupted country is really painful.

You got a new lib/framework to use? Just download it and save it on your USB disk, your friends need it? Just give them the USB disk. Codeigniter and Yii are still prevalent here. Only big companies use java and ruby.

When I try to tell them about Elixir and Phoenix. They like “… nah…”.
But thankfully some ruby on rails guys here want to take some sip of elixir.

Wifi speed (wired is about 40% better)

This is what I can get for around $25/month in Indonesia.

I do have 3 Connections I use on a regular base, and this one is the first:

This is handshaked as 55/11 Mib/s, but used via WiFi and also used for TV, maybe my parents are watching in the other room? I do use this connection about every other weekend.

At home my connection is handshaked at 26/1 and I am planning to change to switch to something faster as soon as the current 2 year contract expires. I will add a speedtest as soon as I am back home.

My connection at work is just another bummer and I am not quite sure how fast it really is. But as far as I know we have a GiB/s connection into the datacenter and are routed into the Internet from there, but then there is some unknown limit kicking in, also customer connections are always priorized.

This correlates to the numbers my boss gave me a couple of minutes ago. In fact we do have a full Gib/s into the datacenter, but traffic which has to leave the datacenter is limited to roughly 120 Mib/s and I had some youtube running

Since I am using really a bunch of different bandwiths, and I have even to deal with 64/64 kib/s on my mobile when doing some park-office, I do really know, that a fast connection is really a life and time saver.

I do work in a windows environment very often (at least for my day job), and test in virtual machines. When I have to reinitialize a test VM it is crucial to have a fast connection to re-download everything (vagrant images, packages to install, dependencies of my project, etc).

Sometimes I do have to re-init several times a day (I do have caches though), to check “one-run-greeniness” of my puppet stuff.

Saw several Indonesian tests here and can’t help but cringe. I guess that’s what you get when your former Minister of Communication and Informatics asked (quite rethorically, sadly) “What would you even need fast internet for?” I don’t know about the current minister, but there hasn’t been any significant change AFAIK.

I don’t even want to share my test since I believe it will not be that much different than the ones already posted (not to mention the ISP I use–one of the bigger ones–is so unreliable lately).

Wow, that really sucks, things here are not that extreme

My provider is “OI Fibra” (fiber-optic) here in Brazil/Rio de Janeiro. The plan says 200MBP/S but it’s what I got.

I work at a university with gigabit general Internet and a 10G Internet2 pipe. Too bad the building wiring is 100Mbit

I guess the ISP you test against makes a difference. This is a strange result going against Century Link:

US has monopoly providers in many places so the price and services are firmly in the “whaaatTF” category.

Yeah, I’ve seen South Park “Informative Marklar Popcorn” episode. I’ve been told that it’s because the US is so huge, but still, it’s 2016 damn it, internet should be a human right and provided everywhere by the authorities like roads and water. Prices in the UK are also shocking, now I know why someone would be interested in “Internet Service Providings” there…

To be fair, you can get unlimited broadband in London for £20/month (~$25) which isn’t too expensive. We pay more for higher speed.

Here is my speed, I have a cheapest contract that my provider offers and it’s about $3 in Kyiv (Ukraine)

Live in a farm in Iceland with a fibre optic connection.
The connection alone would be about $60 but I do have a package that includes unlimited calls landline and IPTV system with a few channels.

This speed is totally not needed for development. I’ve happily used 3G network speeds and didn’t feel like it was holding me much back. But everything under 2Mb/s would be quite annoying in the long run.