After working on it for a couple of months and using it in production for most of that time, today I’ve released LiveAdmin, a LiveView based Admin UI for Phoenix apps. 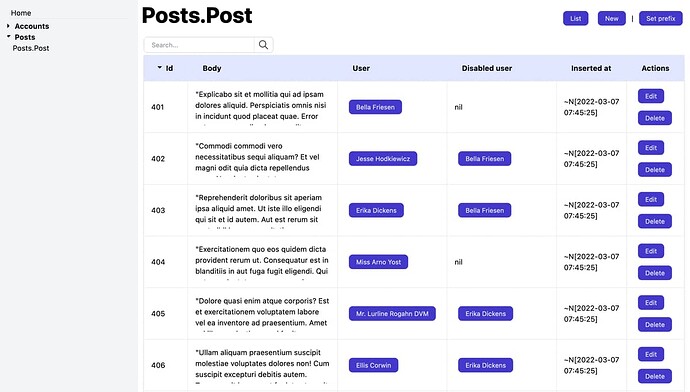 Not much to say about it, it follows in the footsteps of Kaffy and ExAdmin before it to provide a pre-rolled “administrator” UI for Ecto/Phoenix apps.

The main thing that sets it apart, aside from using LiveView, is that it has native support for multi tenant applications. I built it primarily to solve my own use case and for the sake of my own curiosity and learning, but its design is also strongly informed by the intention to remain as lean and simple to configure as possible, while providing powerful escape hatches in the form of full view overrides.

Although it is solidly usable now, it is still essentially in the prototype stage, so I would advise trying it out mainly if you have time/energy for a bit of experimentation. That said, I’d really appreciate any testing/feedback and opinions about how to do things differently.

What it has now:

Cheers, and thanks in advance for your thoughts and suggestions.

is there an example repo showing it’s abilities?

At the bottom of the project readme, there is a link to a demo phoenix app with example configuration. You can also run that app locally, but I still need to document the steps for that. For now the easiest way to test it out if you already have a phoenix app set up to use live view is to just add it there, since it is only a few extra lines of config.

Mainly consists of various minor improvements and bugfixes, but it does contain a fix for a somewhat nasty issue that can cause form views to hang, so I would recommend updating.

Hi @tfwright,
Thanks for this super handy library, the setup was a breeze! And the ability to traverse/update belongs_to associations is awesome.

Looking forward to your planned features, in particular - css overrides. (I have already been asked about a ‘dark mode’ :P)

A way to customize the display of particular fields/ecto types would be nice, maybe I missed it in the docs… 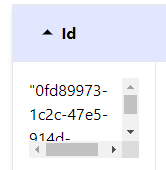 I dont really care to see the value - but a way to copy it to clipboard would be slick, and maybe just an icon with a title attribute to show the value on hover would be a better way to squeeze it in the cell. A simpler approach might just be truncating via css Text Overflow - Tailwind CSS

Thanks again for your great contribution to the community!

Hi @harmon25, thanks for the kind words and feedback, it’s great to hear someone else is finding the lib useful.

CSS overrides should not be far off at all. Right now CSS is read from a file that is compiled and stored in the package. I think it would be fairly easy to support an option taking a path to any other file to read instead. I can certainly make that a priority in terms of the roadmap. And a little further off, configurable through the UI itself so people don’t have to fight about light vs dark mode

And agreed that the current UI is not optimal for binary ids. I like the idea of a copy button but I’m wary of cluttering up the table UI too much. I was thinking of adding a modal “show” view though where copy buttons would find a good home.

Let me know what you think, and of course, PRs always welcome.

Thanks for this library @tfwright – I agree, things were really easy for me to set up!

The only snag I ran into was in dev while also running the phoenix_profiler, but disabling it resolved everything. I can file an issue with the stacktrace I saw if that’s helpful!

It seems like the best way to display the list view for a resource with longer text fields is to create a custom component for those views, is that correct?

How would I go about adding parameters like slugs to the live_admin route? If the route for my resource is /resource/:slug, I would love to tell our users to “just put /admin at the beginning of a resource you want to modify”, so that the resulting admin view is /admin/resource/:slug.

Thanks for your work so far! I see this being really helpful for our team.

Hi @jondelmil thanks for trying LiveAdmin out and glad to hear it’s working well for you so far.

The only snag I ran into was in dev while also running the phoenix_profiler , but disabling it resolved everything. I can file an issue with the stacktrace I saw if that’s helpful!

Please do open an issue. Of course I’d like to maintain as much compatibility as possible with other libraries, or at least be able to add advice to the README.

It seems like the best way to display the list view for a resource with longer text fields is to create a custom component for those views, is that correct?

It depends on exactly what your need is, but yes, generally the default list view does not make it easy to display the full contents of larger fields. Right now the index is not actually overridable yet so I will add that to my short term todo list as well. Although I’d like to improve the CSS to alleviate the issue short of overrides, which I’d like to be a last resort for real corner cases, and this sounds like a common problem people are facing.

How would I go about adding parameters like slugs to the live_admin route? If the route for my resource is /resource/:slug, I would love to tell our users to “just put /admin at the beginning of a resource you want to modify”, so that the resulting admin view is /admin/resource/:slug.

I can’t think of a simple way to handle fully customizable urls right now, although for slugs specifically I think it would be feasible to add an option to customize the id field. I’ll add that to my list as well.

As part of the CSS restructuring, color-related CSS declarations were moved to a separate file, which can serve as an example for changing the “theme.” @harmon25 hopefully that facilitates the addition of a dark mode. If you have success with that customization feel free to share it here!–and/or let me know where it could be improved.

After experimenting with a modal “field inspector”, I ended up just adding a copy button. I am still weighing adding a show view, but implementing a modal accessed from the index view introduced too many UX snags so this seemed like the least intrusive way to solve that use case.

I just finished with some css tweaks that were pretty easy, here is an example for other folks.

This would allow truncating specific fields like Id's to keep them from wrapping on multiple lines.

Let me know what you think, I might be able to hack together a POC if you like the idea…

Generally speaking I think adding classes to any/all elements that wrap what can be considered a UI “unit” (admittedly not a super well-defined category) makes sense to maximize what can be achieved through CSS overrides.

I created a fork - and sent a PR that fixes something I noticed in with the custom css applied.

Very small release with a couple of improvements:

The second is a major change that will likely break things if you are using the old components option. Originally I conceptualized this as a “view” override using a render function MFA (similar to other option values) but that model turned out not to make much sense with LiveView, because views are by default fairly tied to their components if there is any state involved, which, in the case of forms, there is a good deal. So I decided to change the option value to a module instead, which makes it much cleaner and more straightforward to customize the form behavior when needed.

Migrating to the new model should not be difficult, all that should be required is to move your custom render function into a LiveView component module and pass that as value to the component you want to override instead. I updated the dev app with a more useful example of how and why to do this. Basically, the main non-cosmetic reason I’ve found is to be able to use virtual fields (like passwords) in the form. While working on this I considered some ways I might be able to support those automatically without overrides but for now this is the best approach to handle things like password encryption in form actions.

Forgot to include it in my post above, but v0.5 also includes this: switch to type specific classes for index table cells · tfwright/live_admin@b269877 · GitHub

v0.5.1 fixes an issue in the last release that broke compilation.

For this most part this is a maintenance release with various minor bugfixes and a somewhat hefty refactor of some of the business logic. However it also includes some UI changes that might break CSS overrides, as well as a config change that brings the home page override API into line with the other views, so there’s a decent chance upgrading will require changing some code.