The mix phx.new archive can now be installed via hex, for a simpler, versioned installation experience.

The new generators also use Milligram in favor of Bootstrap to support classless markup generation. The result is nice looking defaults that allow generated markup to be much more easily customized to your individual CSS requirements.

Thanks to the release of Cowboy 2, Phoenix 1.4 supports H2 with a
single line change to your mix.exs. Simply add {:plug_cowboy, "~> 2.5"}
to your deps and Phoenix will run with the Cowboy 2 adapter.

Most browsers require connections over SSL for HTTP2 requests,
otherwise they fallback to HTTP 1.1 requests. To aid local development
over SSL, phoenix includes a new phx.gen.cert task which generates a
self-signed certificate for HTTPS testing in development.

Our development compilation speeds have improved thanks to contributions to plug and compile-time changes. You can read more about the details in my DockYard post

Our 404 page in development now lists the available routes for the
originating router, for example: 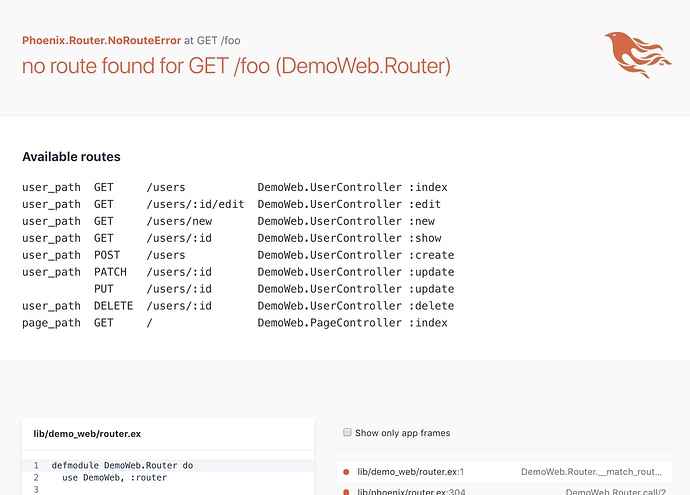 A highly requested feature has been access to more underlying transport information when using Phoenix channels. The 1.4 release now provides a connect/3 UserSocket callback, which can provide connection information, such as the peer IP address, host information, and X-Headers of the HTTP request for WebSocket and Long-poll transports.

As part of the channel overhaul, we have deprecated the transport macro, in favor of providing transport information directly on the socket call in your endpoint. Updating is easy, by making the following changes:

A new, backwards compatible Presence JavaScript API has been
introduced to both resolve race conditions as well as simplify the
usage. Previously, multiple channel callbacks against
"presence_state and "presence_diff" events were required on the
client which dispatched to Presence.syncState and
Presence.syncDiff functions. Now, the interface has been unified to
a single onSync callback and the presence object tracks its own
channel callbacks and state. For example:

That’s all there is to it!

The mix phx.new generator now uses webpack for asset generation instead of brunch. The development experience remains the same – javascript goes in assets/js , css goes in assets/css , static assets live in assets/static , so those not interested in JS tooling nuances can continue the same patterns while using webpack. Those in need of optimal js tooling can benefit from webpack’s more sophisticated code bunding, with dead code elimination and more.

The Programming Phoenix Book
is in beta and available through PragProg, and includes all the latest changes for 1.4.
We have titled the book “>= 1.4” and consider it relatively future proof as we continue
minor version releases.

We would like to specially thank Loïc Hoguin for his work on Cowboy 2,
allowing us to provide a first-class HTTP2 experience. We would also like
to thank Bram Verburg, who contributed the local SSL certificate generation,
for cross-platform, dependency-free cert generation.

Additionally, I would like to thank José Valim and Plataformatec for their work on the channel layer overhaul which provides an extensible foundation going forward.

As always, we have provided step-by-step instructions for bringing your 1.3.x apps up to speed:

Please report issues to the issue tracker, and find us on
#elixir-lang, elixir slack, and the Elixir forum if you have any
questions. The full list of changes from the changelog can be found below.

Whoo hoo - well done Chris and everyone else involved!!

The Programming Phoenix Book
is in beta and available through PragProg, and includes all the latest changes for 1.4.
We have titled the book “>= 1.4” and consider it relatively future proof as we continue
minor version releases.

One of the best things to read about that is the >= 1.4. Just knowing that there’s not going to be an expectation of buying a new book everytime a new version comes out is pretty fantastic.

Hi! This is awesome, thanks to everyone for their hard work on this!

I remember watching a talk a while back, given by Chris McCord I think, saying that providing better instrumentation/metrics primitives for services like AppSignal, New Relic, etc., to build on. Did that get dropped?

Are you referring to the telemetry project?

Telemetry is what that project became. Chris mentioned it in his talk at elixirconf but it got a little pushed aside by the LiveView thing.

We have titled the book “>= 1.4” and consider it relatively future proof as we continue
minor version releases.

Just knowing that there’s not going to be an expectation of buying a new book everytime a new version comes out is pretty fantastic.

And I would wager that @chrismccord will be happy if he doesn’t need to write a new book every time a new version of Phoenix comes out as well, considering the amount of work involved

Seconded! It’s a great book. Everyone should have a copy readily available.

That’s the one! We will fully integrate it on Phoenix v1.5. Ecto 3.0 will already leverage Telemetry though.

I thought the telemetry library was meant to be in Erlang so that it is easier for the entire BEAM ecosystem to take advantage of it?

Aside from the nil in the config snippet which is easy to catch (but should still be fixed), I had a slight WTF actually pointing my web app to the generated self-signed certificates. They rest comfortably in my $UMBRELLA_ROOT/priv/cert/ directory and me copy-pasting the above snippet in apps/myapp_web/config/dev.exs is looking for them in $UMBRELLA_ROOT/_build/dev/lib/myapp_web/priv/cert/selfsigned_key.pem. OK, I just move them to apps/lib/myapp_web/priv/certs/ and recompile. The local SSL listener works.

The generator should probably be umbrella-aware when offering help. It was easy to fix the error but I imagine it would catch off-guard somebody who is in a rush.

How would this piece of code be affected by the deprecation on view as an argument to render?

unchanged, we only deprecated the Phoenix.Controller.render which accepts a view, in favor of conn |> put_view |> render(...)

Milligram seems dead. You just switched from brunch to webpack, but had to take in another dead dependency? The fact that its installation instructions still includes bower… And it still has clearfix… And its last commit was half a year ago, so its grid system implementation is most likely outdated… I don’t use that part of Phoenix, but felt strongly that it needs to be pointed out.

First off, Milligram is tiny. The big goal is for all of our generated markup, whether phx.new or phx.gen.html, is to be classless, while still looking great out of the box. Milligram gives us that. We’re not prescribing you use Milligram for all your styles, rather we are allowing folks to hit the ground running and not have to rewrite all their HTML later when they go to use Bootstrap, foundation, Bulma, et al, or their own custom CSS solutions.

classless is a good idea. Thanks!

Ah I misunderstood. Thanks!

Good job, Is there a specific schedule for rc1 or any other rc.x?

Anyone else excited that this means LiveView is one step closer?

Excited? Very much so – I can’t wait! However, I doubt we will see LiveView any time in the near future