Using a dynamic favicon allows users to view a status without having the page in front.

In addition to these basic operations this library includes some special operations to help with common use cases.

Reset a favicon to its initial value
The initial attribute values of favicons are preserved on the first load of the website and can be restored using reset/0. This is in particular useful to erase all previous changes when a user visits a new page by including reset/0 in the on_mount hook.

Set the value of a placeholder (mimicking Phoenix’s assign)
Common use cases are:

Create and restore snapshots
By creating a snapshot of the favicon after multiple operations, you can restore the favicons’ attributes by only sending the snapshots’ name over the wire.

Visit the documentation of Phx.Live.Favicon module for the full list of operations.

See the Guides page for common use cases. The Example App demonstrates various use cases and includes a ‘debug frame’ which shows the HTML of favicon head elements in real time.

To start this example:

looks great! - what does the browser support like nowadays?

That depends on what exactly you want supported. But here is a first attempt to answer the question: "favicon" | Can I use... Support tables for HTML5, CSS3, etc

Update
The example app has been revamped, now including:

v0.1.1
Yes, this is a bugfix release with a breaking change. I doubt remove_attr/3 was used (as nobody reported an issue)

By using Phoenix Live Head 0.1.2 we can now safely use reset/1 (and reset_attr/2) in the on_mount hook to set the favicons to their default when navigating to another page. Thanks to @dfalling for leading me to the use case and subsequently the issue.

Now the order of events is preserved, the reset/1 and reset_attr/2 add an event to set the favicons to their initial values, but will dismiss any favicon events (for given attr in case of reset_attr/2) set before.

Feck ya! Just what I needed. Works great and I see it was only released two weeks ago!

I knew it could be done, but did not build it yet: a message counter using SVG! Now I have a working version in the Example App (not published yet). Let’s say it’s better not to mix PNG and SVG favicons as browsers are not fond of switching from one type to another.

@BartOtten would be great if you could deploy the demo on fly.io or similar - so it’s easy to take it for a spin…

I already use one instance for Phoenix Localized Routes

While creating the message counter example, I found some inconveniences in using the lib and needing to mix in ‘raw’ Live Head. So……

A new version has been released as RC on Hex; it powers the updated example page which hopefully will be online soon, so you can all come up with fancier gifs of ‘animated’ favicons! 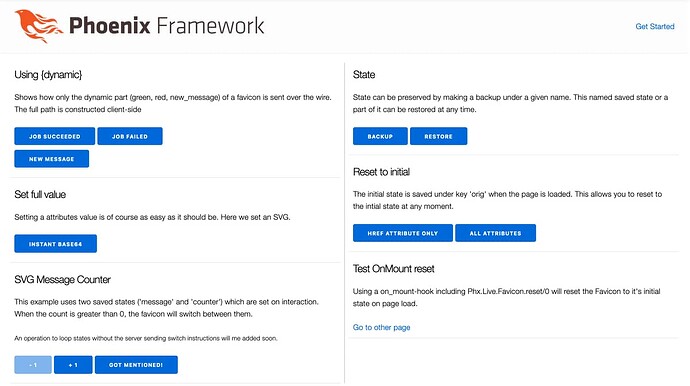 The new operations snap and restore make it possible to store the result of many operations under a chosen name and restore it at a later time by only sending the snapshot name over the wire.

In the Live Favicon Example application it is used to send all changes required to switch between an dynamic SVG counter and static PNG message-icon once, and toggle the state between them; creating a flashing notification. As it also makes a snapshot of the state before the favicon begins to flash, the icon on the page can be restored to it’s value as soon as the user had read the unread messages.

You can now use multiple custom named placeholders, instead of only one {dynamic} per attribute.

This is quite a major release as a lot of logic was rewritten in the underlying lib. However, for most there won’t be breaking changes so the upgrade should be safe.

Please upgrade to the RC version and let me know if you experience any issues (or better: how many issues it solves!)

See also: the diff of Example App and especially how it uses the new snapshots and custom dynamic placeholders.

Changes
No fundamental changes to rc.0 so the post above is accurate. The example app has been updated to use the new 0.2.0.

Better documentation
The README has seen some work too and a few GUIDES were added.

Migration guide
As this is a breaking release due set_dynamic being redefined, you should update your mix.exs file to include:

When using set_dynamic from 0.1.x you can rewrite them to
set_dynamic("dynamic", value). Notice it targets a specific placeholder instead of an attribute. When you used multiple {dynamics} on different attributes, you should rename every dynamic placeholder to be unique. See the docs of set_dynamic/3