Hi does anyone have up to date Spacemacs + Alchemist tutorial for noob?

I spent over an hour today trying to make it work. I can’t find company-mode nowhere on ELPA or elswhere, is it deprecated? Spacemacs tries to add to my dotfile elixir everytime i open .ex file, and yet not even syntax is colorized

Same, I use solarized dark about everywhere, even as my github theme. ^.^

Would you mind sharing a gist of your .spacemacs file?

I keep meaning to port Elixify over…

Currently in beta, which basically means some versions are not yet done - if there are no major stoppers I will start working on the Vim and Emacs versions (as they require quite a bit of additional work). The most complete versions are: TextMate TextMate2 Sublime Atom I’ve now added a version for: SpaceMacs Vim The original TextMate version is the most complete (all others derive from it) so if you feel something is missing check to see if it’s in the TextMate version first. Give it a s…

I think i may have solved problem the hard way. I deleted .spacemacs and let it recreate on next startup.

I had a quick look. Do me a favor, give my config file a try and see if you like it.

You can also check the differences to see where I enabled alchemist and auto-completion.

I had to comment out font ligatures substitution, function from line 253 because it freezed on SPC b b but other then that I have working Alchemist, and a base to start learning emacs

Thank you very much

Awesome! Those font ligatures are awesome, might be worth investigating why it is freezing on spc b b

I also feel it’s a pretty rad setup for JavaScript. If you need help I can tell you how to condense things with tern, generate and setup your tern file, and have intelligent autocomplete for your favorite JS libs (mine are react, redux, rxjs).

It’s also set up for elm and go and rust and clojure and… I play around too much.

I also feel it’s a pretty rad setup for JavaScript.

When people ask me to help with JS I tell them that I don’t understand it, and even I see an obvious bug I keep my mouth shut and play stupid, they stop bothering me with JS sooner or later. So I appreciate the offer, but I don’t think I need anything JS related to be honest

With the ligatures problem there is this issue https://github.com/syl20bnr/spacemacs/issues/6468 but it’s closed. I’m on mac sierra using emacs macport maybe that is the issue. Don’t have time now to investigate, but If I’ll find solution I’ll post it.

I didn’t know about Fira Code font, I should check it out, @terakilobyte why do you include alchemist on the additional-packages, isn’t it included with the Elixir layer?

It might be now, dunno. My config file has changed very little over time. I’ve only changed it when I want something new or need to fix something, and currently “it ain’t broke”.

Hey, I’ve just published my Rebecca theme. I currently use it for my Elixir coding. It’s based on dracula and gloom. 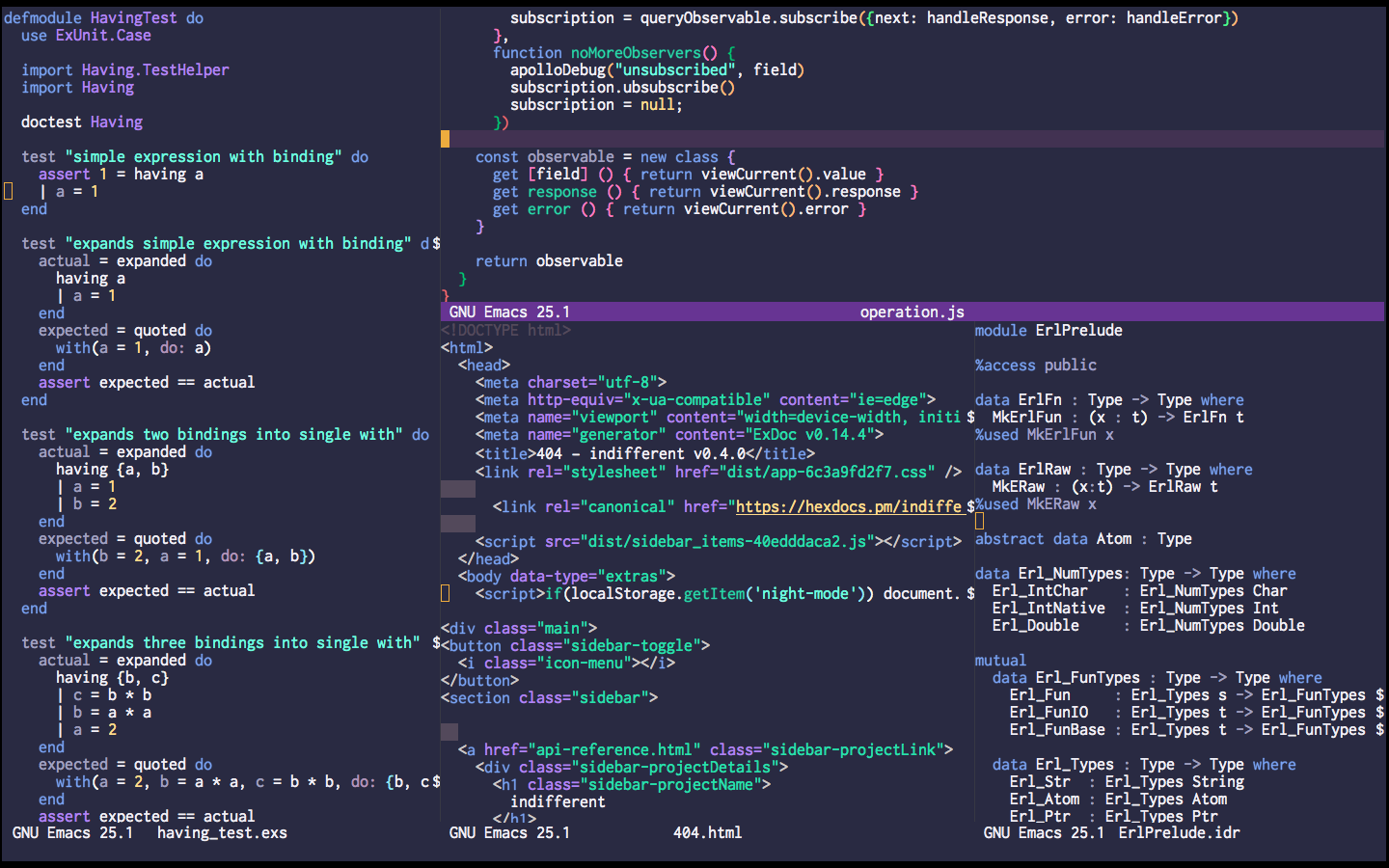 I wanted to try it out, but it doesn’t seem like it’s actually up on MELPA yet. Do you have an ETA on that? I see that as of writing there was apparently a build going on and they apparently take 4 hours. Do you think it’ll be in the next load on MELPA?

If you do use spacemacs, and have a custom layer for your themes, you can fetch it from github otherwise we’d have to wait for the MELA recipe to be available.

Checking it out now. The obvious downside is that like a lot of dark themes with dark-but-not-black backgrounds it looks wonky in a terminal (odd blue background), but it looks really nice in the GUI version. I’m gonna use it as my main theme for the coming week and we’ll see how it goes. Thanks!

Hi all, I am just updating the wiki, can you please confirm the recommended set-up installation procedure please? Is it as follows:

Use the first approach. the second one is for pure emacs and might be discovered as an orphan and deleted by Spacemacs.

“Best” is kinda hard, but the elixir layer on spacemacs brings more to the table than installing only alchemist, so it is probably the recommended approach (for me personally, at least). And what @Forseth said.