Adventures in Robotics with Elixir For me this one was one of the most fun and inspirational talks about elixir. Also this one from the same conference Learn Elixir: Building a Neural Network from Scratch

I got a clearer understanding of OTP from this video. The code comparisons using GenServer were helpful.

Edit: Just finished watching it and have to say it is one of my favourite talks about Elixir - brilliant for selling the idea of using Elixir to others

I suspect the answer is no, but does anyone know if this talk is available in a video where the code on the screen is visible?

These might be better but audio not quite as good…

This is the one that actually got me interested in Elixir. Fun thing is that I randomly stumbled over it, after reading about Erlang.

Originally posted in this thread.

Just watched the firs 2 minutes - think you’ll like this

We’ve collected several videos from March related to embedded Erlang and Elixir at http://embedded-elixir.com/post/2017-04-06-embedded-talks-in-march/. In particular, one you may not have noticed because it was as a meetup rather than a conference: 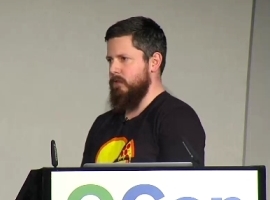 Why We Chose Erlang over Java, Scala, Go, C

Colin Hemmings discusses when and why one should choose Erlang over other options, but also when not to choose it.

I’ve been really diving into learning OTP over the past few months. It was really hard for me to understand for a long time, but it’s finally starting to click! OTP is AWESOME.

I recently gave a talk on OTP at my local meetup walking through the basics, hoping to help spare others my initial anguish of trying to understand it all. It assumes no prior knowledge of Elixir or OTP (though understanding basic Elixir syntax and its data structures is helpful).

Let me know if you enjoy the talk, would love to hear any other (kind) feedback!